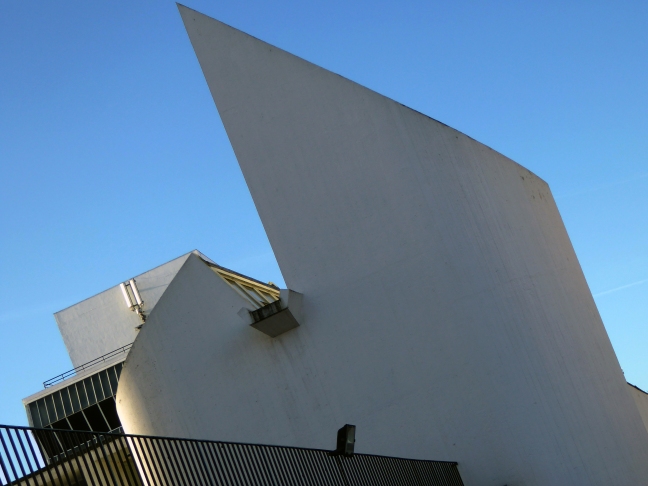 Go West, young man, go West. There is health in the country, and room away from our crowds of idlers and imbeciles.

So said Horace Greeley, I beg to differ.

Here we are vaguely on the western side of Manchester, with very little by way of room, just acres of architecture – mostly modern.

It can be seen here as the demolition takes place, preparing for a new arrival on the approach to Piccadilly Station.

An extravagant concrete, steel and glass swish, both welcoming and waving farewell to the weary rail traveller. Changes of use have taken place, retail has been and gone, now a modern mash-up of grub and stuff, above there’s an Apart Hotel.

Moving on down the road a ways in search of an education, we encounter the UMIST Campus 1962-68 Cruikshank and Seward.

But first we hit a concrete, not brick, a concrete wall, a barrier with a barrier, encased in green metal mesh, shrouded in leafy trees.

Renold Building designed by W. Arthur Gibbon of Cruickshank and Seward. It was one of a suite of white concrete structures on the UMIST campus in Manchester. It was the first of its type in the UK – an entire building to house lecture theatres and seminar rooms.

I’m a fool for an open glass-encased stairwell.

And a passageway Victor Pasmore Mural.

This is a maquette which is in the lobby of the Renold Building.

Turn around and there’s the Pariser Building.

The Maths and Social Science Block.

Gone is the low lying Chemistry Building – it’s mosaics now almost hidden in intemperate storage at the base of the Faraday Building.

Works continue with the preparation for the construction of the new £60 million Graphene Engineering Innovation Centre GEIC and the demolition of the Faraday Undergraduate Building and link bridge on the North Campus.

The mosaic, `The Alchemist’s Elements’, in the entrance colonnade, has now been safely removed from the building and are being stored securely on campus until the building works are complete.

On completion of the GEIC in late 2017, the 4.5m x 3m artworks will be permanently reinstated within the site for visitors to enjoy for years to come.

The mosaics were created by Hans Tisdall a German-born artist, illustrator and designer with a distinguished career in 20th century Britain.  Following the Second World War, Tisdall became involved in the revival of public artworks within many educational and industrial buildings – one of which included the Faraday Building at UMIST.

As of last week this was not the case.

Faraday Tower was designed by H. M. Fairhurst and built in 1967.   A bridge connected  it to the Faraday Building.  Originally a library occupied the bridge.

The walkway has also gone walkabout.

Just about hanging on by the hem of its kilt is the Swinging Sporran and its delightful brick relief.

Reimagined by the marketing imagineers as Retro.

Happily the award winning Mancunian Way is still there, though partially shrouded in mysterious goings on.

Another great sadness is the closure of St Augustine Church 1967-8 by Desmond Williams & Associates at All Saints, without a priest for well over a year.

Though there are rumours of a change of use and this wall relief by John Brumby is still visible.

Onward and upward and slightly backwards into the world of modern information technology the National Computing Centre 1974 Cruickshank and Seward.

Currently accommodating a ground floor mix of retail and that most modern of architectural expressions – the container city – Hatch.

Let the train take the strain for Hell is a City.

Martineau makes his way across the rooftops in pursuit of Starling. Looking down on Oxford Road station at the end of Station Approach off Whitworth Street.

The station was listed Grade II in late 1995, and though the materially consistent seating, kiosks and ticket office remain, the original ticket collectors booths were dispensed with during earlier refurbishment.

Lets hot foot it to St Peter’s Square before Stanley Baker falls off the roof of the Refuge – where Peter House 1958 Amsell and Bailey awaits.