On one wet Monday, not so very long ago, I took the train from Stockport to Doncaster, not really knowing what to expect, I was more than pleasantly surprised, to find the Museum.

Tucked behind the Civic Centre, Police Station and Magistrates Court sitting very quietly, very much minding its own business, and very much on Chequer Road.

Ever so quietly in fact, for on Mondays, it’s closed, ever so very much closed.

Fortunately with the ill advised and poorly prepared visitor in mind, there is ever so much to be seen from the outside, looking in through closed gates and locked doors.

Doncaster Museum was officially opened on the Friday 30th October 1964 by Princess Margaret. The building was designed in the office of the Doncaster Borough Architect’s Department in a team led by borough architect Mr L.J. Tucker. It was completed at a cost of £290,000, which included the purchase of the land that it stands on. It was the first ever museum and art gallery in this country to be entirely funded from local rates. The frame and general construction of the museum and art gallery was carried out in reinforced concrete. Externally concrete framework and ribs are exposed, while panel infilling between the ribs is executed in hand-made rustic facing bricks.

The two sculptures on the outside of the building are by Fabio Barraclogh and Franta Belsky, and the tile decoration was apparently carried out by Mr Tucker, with tiles that he got from a builders’ merchant- firstly this spiralling cast bronze to the right of the building’s front elevation.

And secondly two large figures on the side elevation to the left. 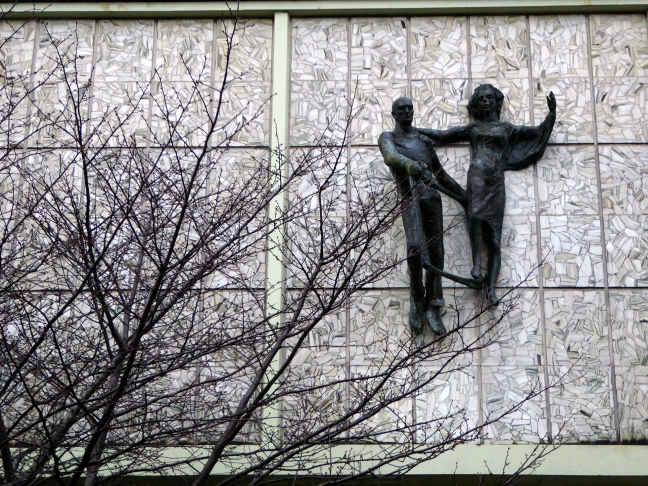 The upper tier of the building is clad in pale, softly toned and smooth mosaic panels.

On the lower tier, to the side and rear are exquisite ceramic mosaic relief panels, combining individual elements in several unique combinations, each with a central roundel within a square setting. These reliefs are flanked with dark hardwood panels, comprised of raised vertical fins.

Sadly they are partially hidden from full view, behind dark green wire fencing.

Opened in 1964 the building is pure Festival of Britain, a cantilevered upper storey overhanging the entrance with a glass fronted elevation -here it is in 1972. 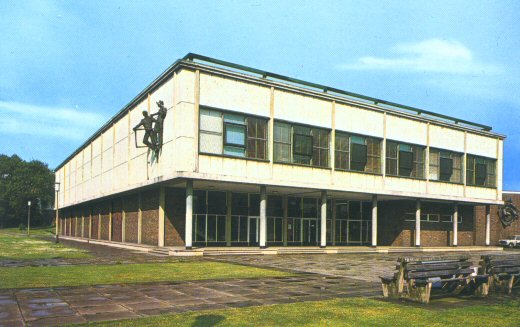 Monday 9th February 2016 and the formerly open aspect, has been landscaped and fenced.

I’ll be back – to take a good look around the inside, but never on a Monday or Tuesday.

One thought on “Museum and Art Gallery – Doncaster”