Something of an iconic, totemic, pin-up poster boy/girl for the Modernists, I bumped into you one rainy day, on the way from here to there. Initially attracted by an unexpectedly bright slab of primrose yellow and white.

Golden Lane was developed in the early 1950s to create local housing for essential workers in the City of London, following the devastation of the Blitz. At the time only around 500 people actually lived in the City of London so the estate was deliberately designed with small units to house single people and couples comprised of the broad social and professional mix needed to support the local community. 554 units were built of which 359 were studios and one bedroomed flats; the remainder were maisonettes and early tenants included caretakers, clergymen, doctors, police offices, cleaners and secretaries. Today there are approximately 1,500 people living on the estate in 559 flats and maisonettes.

Golden Lane was commissioned from architects Chamberlin, Powell and Bon by the City of London Corporation (which still manages it) and built on bombed sites previously occupied by small businesses and industries. Some of the basement areas of the former buildings were retained as sunken areas of landscaping. Building took place over a 10-year period between 1952 and 1962 when Crescent House on Goswell Road was completed. Golden Lane was listed Grade II in 1997 (Crescent House is Grade II*). When built, Great Arthur House was the tallest residential building in London and its Le Corbusier inspired design included a resident’s roof garden. The estate also included a leisure centre with a swimming pool and tennis courts. It is now run by a private operator and is open to both residents and the general public.

I stuck around too take a look, struck by the variety of scale, detail and space within a relatively tight integrated development. Mature greenery abounds along with a delightful water feature.

It would appear that following the 70s right to buy the estate is a 50/50 mix of social and private ownership, relatively trouble free and well maintained, something of an anomaly in our go-ahead, left behind land.

Go take a look for yourself see what you think. 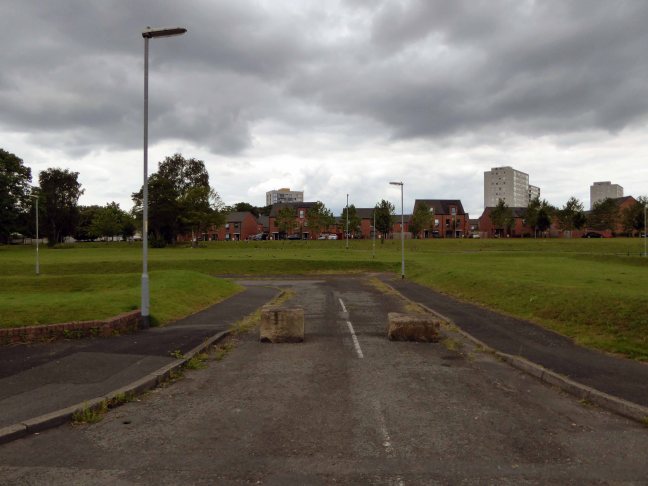 As with all things material and corporeal there was time when you simply didn’t exist.

1860 adjacent to Woodward Street and the Rochdale Canal, a simple agglomeration of loose limbed industrial buildings and such – yet to be christened Blank.

Though contradictorily I have found reference to a bankrupt foundry in the London Gazette 1857.

You appear again during the Manchester Blitz.

Though I have to ask the question of the namers of streets – why so Blank, an off day at the office – we have whole blocks named for poets, painters, and far flung places, so why so Blank?

Hadn’t they heard of nominative determinism – born to be Blank.

Whilst in search of a Brown Cow I found a photograph on the Local Image Collection of 60’s maisonettes in the area alongside Woodward Street.

This Municipal Modernist development seems to have been short-lived and subject to yet more demolition in the area, to be replaced by late 70’s terraced housing.

Which in turn had been tinned up and demolished around 2008.

How did that happen – seemingly viable homes previously changing hands for £100,000 deemed surplus to requirements – land banking, ahead of an as yet unseen masterplan?

Your life was short and sharp – shaped by economic shifts, world war and the local authorities ephemeral housing policies. There is little evidence of your existence, photographic or otherwise, so I want to set the record straight – draw a blank.

Here you are as of July 2019 – tarmac intact, drains fully functioning, pavements paved, awaiting orders. A circuitous run of grassy ridges resembling the remains of some Roman or Iron Age fortification.

Where do we go from here?

As Marvin Gaye so succinctly asked.

Why is there just one remaining tower block dancing unclad around Ancoats?

Let’s go back in time and see if we can find out – it seems that back in 1807 there wasn’t a Woodward Street to be found, the ever expanding industrial might of Manchester had not yet reached these particular green fields of Ancoats.

By 1824 it shows a fresh face to the world christened Woodworth Street, sparsely dotted with new development.

Almost fully formed in 1836 and renamed as Woodward Street, the area begins to accumulate the familiar domestic and industrial clutter of a burgeoning Victorian City.

By 1860 the street is fully formed and open for business.

Workers finding homes in austere and functional brick back to backs, typical of the period’s housing.

Fast forward to the early Sixties and the street is showing signs of age – the century old industries are already in decline, steady jobs, mills and factories gone west and east, well-worn housing looking terminally tired and in need of a little care and attention.

But wait what’s this coming around the bend?

The first wave of urban regeneration, post war optimism incarnate, a bright new shiny future – out with the old and in with the new, as Municipal Modernism stamps its big broad architectural feet all over Woodward Street.

Our story is far from over, this optimism is short-lived the homes, houses and industry are swept away yet again, replaced with two story modern terraced housing and an all too obvious absence of regular employment – yet the tower blocks prevailed.

Former streets were over written and remain as poignant vestigial marks in the landscape.

Grand plans are made for their revival.

Though their future was built on more than somewhat shifting and uncertain sands.

A tower block has been left lying empty for a whopping 18 years. The 13-storey building at Saltford Court in Ancoats has been unoccupied since Manchester council closed it in the 1990s. It was bought by top developers Urban Splash six years ago but residents have now hit out about it still being empty. Neighbours of Saltford Court say it has become an ‘eyesore’ and magnet for vermin since the firm bought it.

A large group of blocks stood tinned up and unloved, yet owned, for a number of years, victims one supposes of land-bankers, developers speculating on an even better return, as the warm waves of gentrification washed slowly over them, from nearby New Islington.

All but one was refurbished, clad and re-let.

Woodward Court was spared – set aside for the homeless.

A period piece surrounded by Post Modern and Revivalist pretenders.

Why not go take a look.