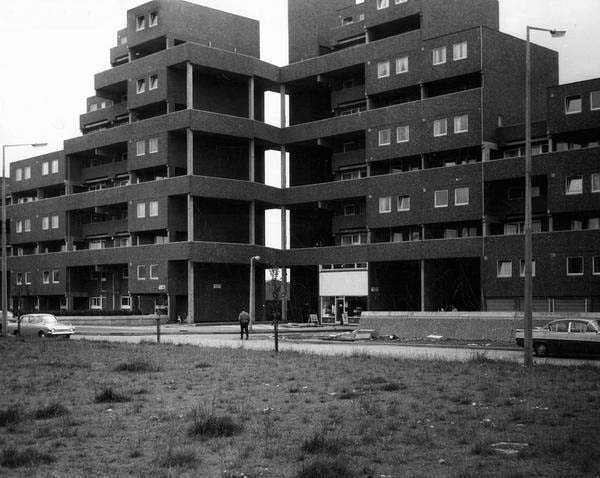 The road to Hell is paved with good intentions and as it would subsequently transpire, loosely attached Bison concrete wall-frame system panels.

Wythenshawe apart, the City of Manchester admitted that it had 68,000 houses described as “grossly unfit” by 1959. 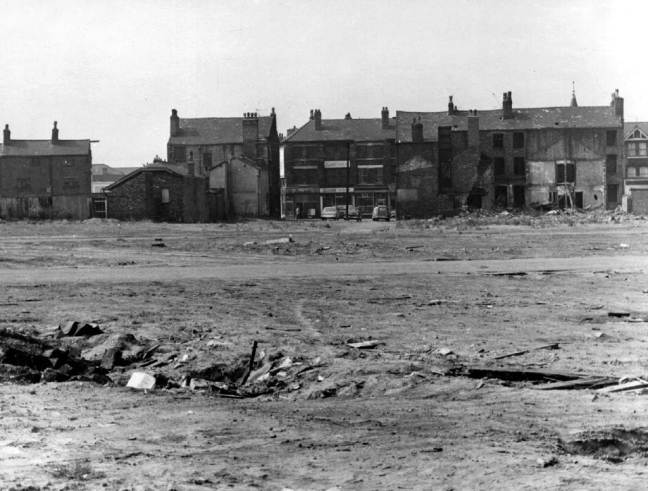 Its solution was to demolish 90,000 dwellings between 1954 and 1976 and to erect 71,000 dwellings by way of high rise flats and to move residents out to newly prescribed “overspill” estates – at Heywood and Langley in the north, Hyde in the east and Worsley in the west.

Most of these displaced people, however, found themselves resettled in tall tower blocks, which, no matter how architecturally innovative, or how improved their facilities, proved disastrous in social terms.

In Coverdale Crescent Ardwick such an architecturally innovative development was built.

The estate, which became known as Fort Ardwick, was a deck access block of 500 homes. Completed in 1972, it was built with the same Bison concrete wall-frame system that had been used in neighbouring Fort Beswick.

By the mid-1980s it was clearly suffering from structural faults. The council employed a private firm of consultants to survey the estate, which found that water was leaking through roofs, steel fixings were corroded and concrete was breaking away. The council had to spend £60,000 immediately to bolt 1,100 panels back on to the building’s internal skin. The city architect, David Johnson, claimed that the report highlighted the rapid deterioration of Fort Ardwick’s fabric.

They said it was shoddy, thrown up, not enough care taken. The concrete panels weren’t made properly – the holes didn’t quite line up. You know what it’s like – you’re putting a flatpack cupboard together and something’s not in the right place but you just bodge it instead of sending it back, starting again, because you want the cupboard up and you’ve got other shit to do.

They had to get these consultants in, after they’d finished, to rebolt all the panels or something , so the whole thing didn’t fall down. Cost a bloody fortune my nan said, and that’s our taxes. And even then the rain got in. They’d put straw between the concrete, which sounds a bit medieval to me, and no-one wants wet straw walls, right? Cockroaches and rats and mould and that.

My nan remembers when they knocked down the terraces. I remember when they knocked down the fort. And maybe they had a point about it being shoddy, because soon as the diggers got their claws in, the whole thing fell to pieces, like it was made out of cardboard and bits of sellotape, not concrete and glass. A fort one week, a pile of rubble the next. No-one wept for it, they say.

I didn’t cry, but I stood at the end of the street and watched the diggers pawing at the walls, ripping the place to bits, our old kitchen wall gone and the cooker and the cupboards and the crap plastic clock just there for everyone to see. Except there was no-one else looking. 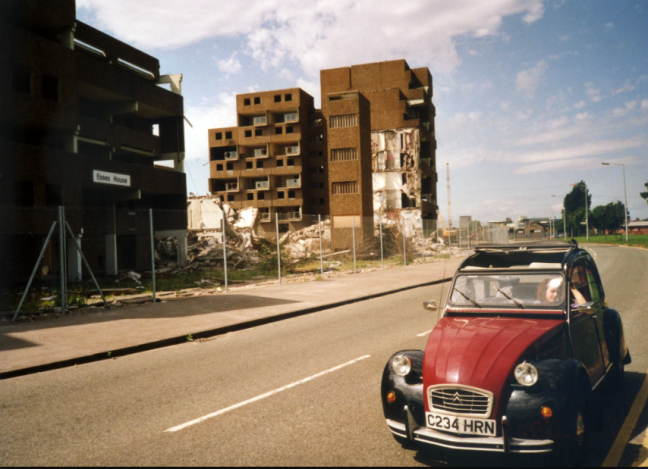 Local MP Gerald Kaufman reported to Parliament in 1974 that, during a conversation with residents, one of them had proclaimed that

“If Labour wins the election, it ought to do two things: abolish the House of Lords, and demolish Fort Ardwick.”

The estate was demolished in the 1980s and the new Coverdale Estate was constructed on the site in 1994.

The House of Lords still stands unabashed by the Thames.