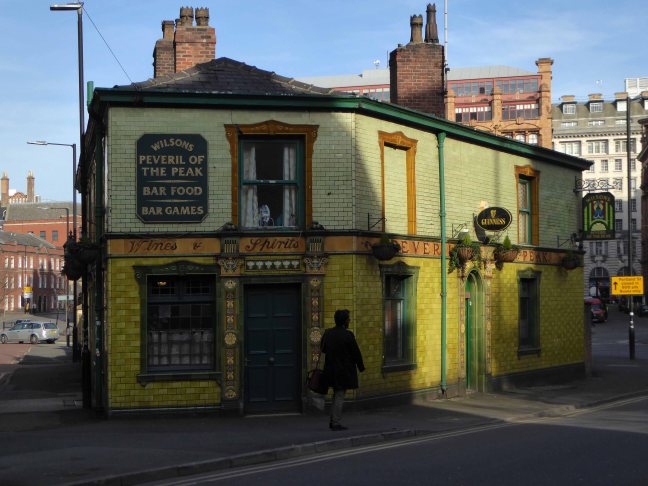 To begin at the beginning or thereabouts, Sir Walter Scott publishes his longest novel Peveril of the Peak in 1823.

Julian Peveril, a Cavalier, is in love with Alice Bridgenorth, a Roundhead’s daughter, but both he and his father are accused of involvement with the Popish Plot of 1678.

Most of the story takes place in Derbyshire, London, and on the Isle of Man. The title refers to Peveril Castle in Castleton, Derbyshire.

The pub also shares its name with the London to Manchester stagecoach.

Which is all very well as the pub is largely known locals as The Pev – ably run since January 1971 by Nancy Swanick.

Nancy and son Maurice, who runs the cellar, also say they have shared the pub with a paranormal presence over the years.

Customers have seen pint glasses levitate off the bar and fall into the glass-wash, it’s like having our own ghostly helper!

The pub was Grade II listed in June 1988 – a fine tiled exterior and 1920’s interior refit largely untouched, it stands distinctly unattached to anything, decidedly somewhere betwixt and between Chepstow Street and Great Bridgwater Street.

Originally a Wilson’s house – the brewery lantern survives over the door.

I’ve taken a drink or two in here over the past thirty or so years, played pool and table football, watched the half time Hallé musicians swish in and out for a swifty.

A little island of green in a sea of grey.

Pop in for one if you’re passing