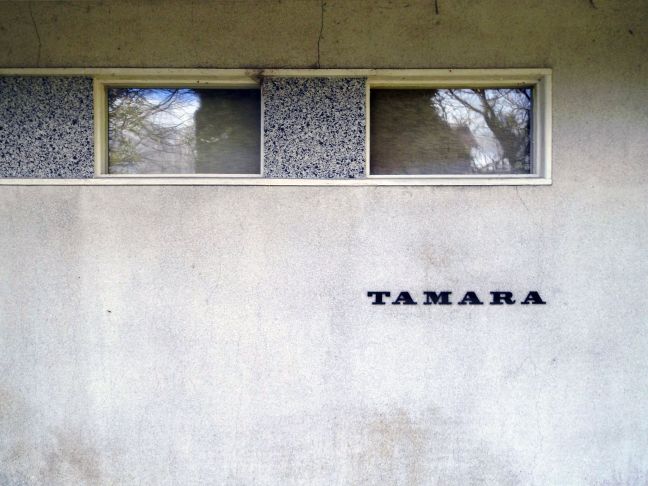 I’ve often cycled by here, on occasion taking time to take a snap or two.

You seemed to be in decline, in need of care and attention. Stood amongst Peak vernacular and sub-Lutyens villas something of anomaly.

A diminutive Modernist house – a rose amongst the herbaceous borders.

Someone seems to have taken you in hand and work is underway, I just hope that they put your name back in place.

Tamara is a female given name most commonly derived from the Biblical name Tamar, meaning date – the fruit, date palm or palm tree. In eastern European countries like Armenia, Croatia, Czech Republic, Georgia, Hungary, North Macedonia, Poland, Russia, Serbia, Slovenia and Ukraine it has been a common name for centuries. In Australia it was very popular from the 1960s to 1990s.

In the United States, the name was fairly common from the late 1950s to mid 1990s, bolstered by the popularity of the film Tammy and the Bachelor – Tammy is commonly a nickname for Tamara. In the US the most girls named Tamara were born in 1970 and the number of Tamaras born per year was greater than 1,000 as late as 1996.

The name is now fairly uncommon in the US: in 2010, the name fell off the Top 1000 SSA Baby Names list, with fewer than 250 baby girls named Tamara that year.

One thought on “Tamara – Whaley Bridge”