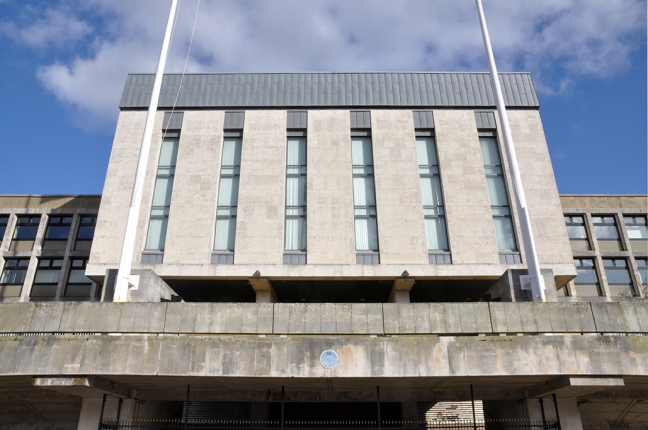 “The Civic Centre tower is the Oldham’s centre of local governance. The fifteen storey building has housed the vast majority of the council’s offices since its completion in 1977. Standing at the summit of the town, the tower stands over 200 feet 61 m high. It was designed by Cecil Howitt & Partners, and the topping out ceremony was held on 18 June 1976.The Civic Centre can be seen from as far away as Salford, Trafford, Wythenshawe and Winter Hill in Lancashire, and offers panoramic views across the city of Manchester and the Cheshire Plain.”

Part of the building joins onto an older office block which dates from the mid-1960s. That was originally headquarters for Oldham’s Regional Health Authority before their move to St. Peter’s Precinct.

I just stand back and gaze in wide wonder at this white giant resplendent against deep blue late Winter skies. High above the surrounding areas of Greater Manchester, it is more than a sum of its parts. The finest materials and finish, bold, optimistic and modern, singing of a civic pride that refuses to be diminished.

Having survived the slow and painful exodus of the cotton industry, and the consequent years of municipal under funding, Oldham is rebuilding itself, with this gem at its centre.

Further info and thanks to: East of the M60