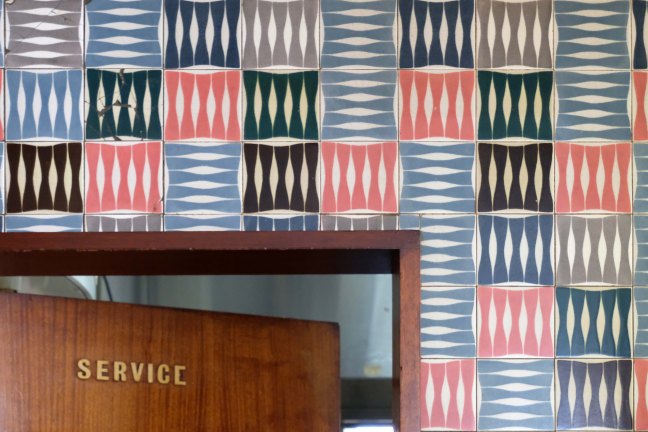 Welcome, at the Kardomah Cafe we have a long history of excellent service, great food and wonderful coffee. We are an independent, established, family run business of nearly 50 years. Traditional values are important to us and have helped us create a warm and friendly atmosphere, which is seen by many of our customers as an important part of their lives, a place to meet their friends, whilst enjoying quality food and drink.

The company that created the Kardomah brand began in Pudsey Street, Liverpool in 1844 as the Vey Brothers teadealers and grocers. In 1868 the business was acquired by the newly created Liverpool China and India Tea Company, and a series of brand names was created beginning with Mikado. The Kardomah brand of tea was first served at the Liverpool colonial exhibition of 1887, and the brand was later applied to a range of teas, coffees and coffee houses. The parent company was renamed Kardomah Limited in 1938. The brand was acquired by the Forte Group in 1962, sold to Cadbury Schweppes Typhoo in 1971, and became part of Premier Brands some time between 1980 and 1997. The brand still exists, selling items such as instant coffee and coffee whitener.

The Kardomah Cafés in London and Manchester were designed by Sir Misha Black between 1936 and 1950.

The original Swansea branch was at 232 High St, and known as ‘The Kardomah Exhibition Cafe & Tea Rooms’, moving to the Castle Street in 1908.

The Castle Street cafe was the meeting place of The Kardomah Gang, which included Dylan Thomas, and was built on the site of the former Congregational Chapel where Thomas’s parents were married in 1903. The cafe was bombed during WW2 and was later replaced by the present Kardomah Coffee Shop Restaurant in Portland Street.

An in-depth history is available here.

I’d never had the pleasure of visiting a Kardomah before, imagine my delight when I was directed there by local artist, activist and archivist Catrin Saran James, during our delightful Swansea Moderne tour!

Following an extensive walk from one end of town to the other, I returned there for a late midday bite to eat and a sit down – it looked a little like this:

Many thanks to the staff and customers for putting up with me wandering around for a while with my camera, whilst they worked and ate. 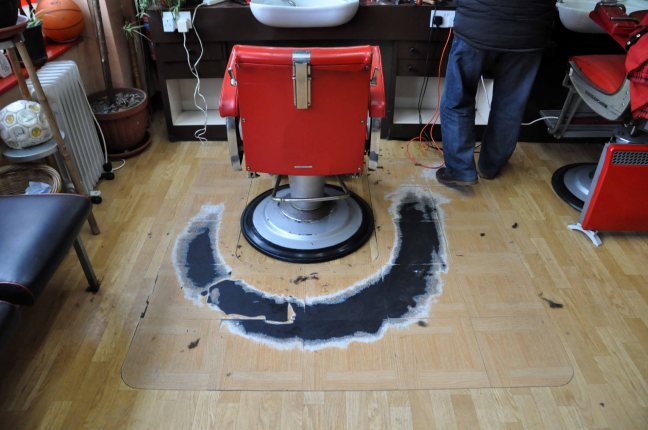 I passed by almost every day, cycling back and to, to work.

One day I stopped, popped in, asked to chat and snap – Tony obliged.

Cypriot George in the city centre had already give me salon time.

These photographs were taken in March 2104 – Tony’s still there, cutting hair.

Since 1971, presiding over his empire of mainly masculine ephemera, rival football clubs fight it out for space on the crowded walls. Motorcycles race around the dado rail, stood stock still, gathering another dusting of dust. A slow accretion of memories and memorabilia, tracing a lengthy short back and sides life, of short back and sides, as stylists’ style snaps come in and out of style and back again.

Thanks again Tony a privilege to spend some time in your world.

I’m in a different world:

A world permanently waving at itself.

My thanks to Sheila – sixty years a stylist and her customers for allowing me into their world for a short time – a privilege and a pleasure.

Little seems to have changed here within – on the corner of Oldham Road and Mellor Street.

Shelia’s certificates of 1962 – so proudly displayed.

Blimey, I remember the castle and the hamster wheel thing. It was, in those days, as close to you would get to an adventure play park, it was on the same site that is now held by Clambers and it was all outdoors. The Castle, the Hamster Wheel, an army zip slide, seesaws, roundabouts and I think there was a small paddling pool. The Castle stunk of wee, probably where kids couldnt be bothered to get to the toilet. I remember it even had towers that you could go up .

Next to the play park was a putting course and you use to pay where the bowling green hut is now. Then the other side was a crazy golf course and you purchased the tickets from the model village hut. We had some great times up there . We use to spend the morning in the museum and then a snack and a drink at a very small cafe that was just below White Rock Road, in Cambridge Road (since gone) and then off to the putting, the play park and then the crazy golf, in that order

Can you imagine kids being allowed out to do that now ? We were 12 years old in 1973 and use to catch the 433 bus from the Fortune of War (well thats what we called the bus stop anyway) in Priory Road, to the Oval and back.

The Hastings Model Village took three years to build and opened on 19th February 1955. Designed by Stanley Deboo, it featured models of classic Sussex houses including oast-houses and timber-framed houses.

Sadly the Model Village was forced to close in December 1998 after vandalism caused £5,000 worth of damage. It was replaced by a miniature golf course built by Chris Richards.

The model village was replaced by a lazer maze style gaming centre in 2011, but still some of the original model village foundations remain at the site to this day. 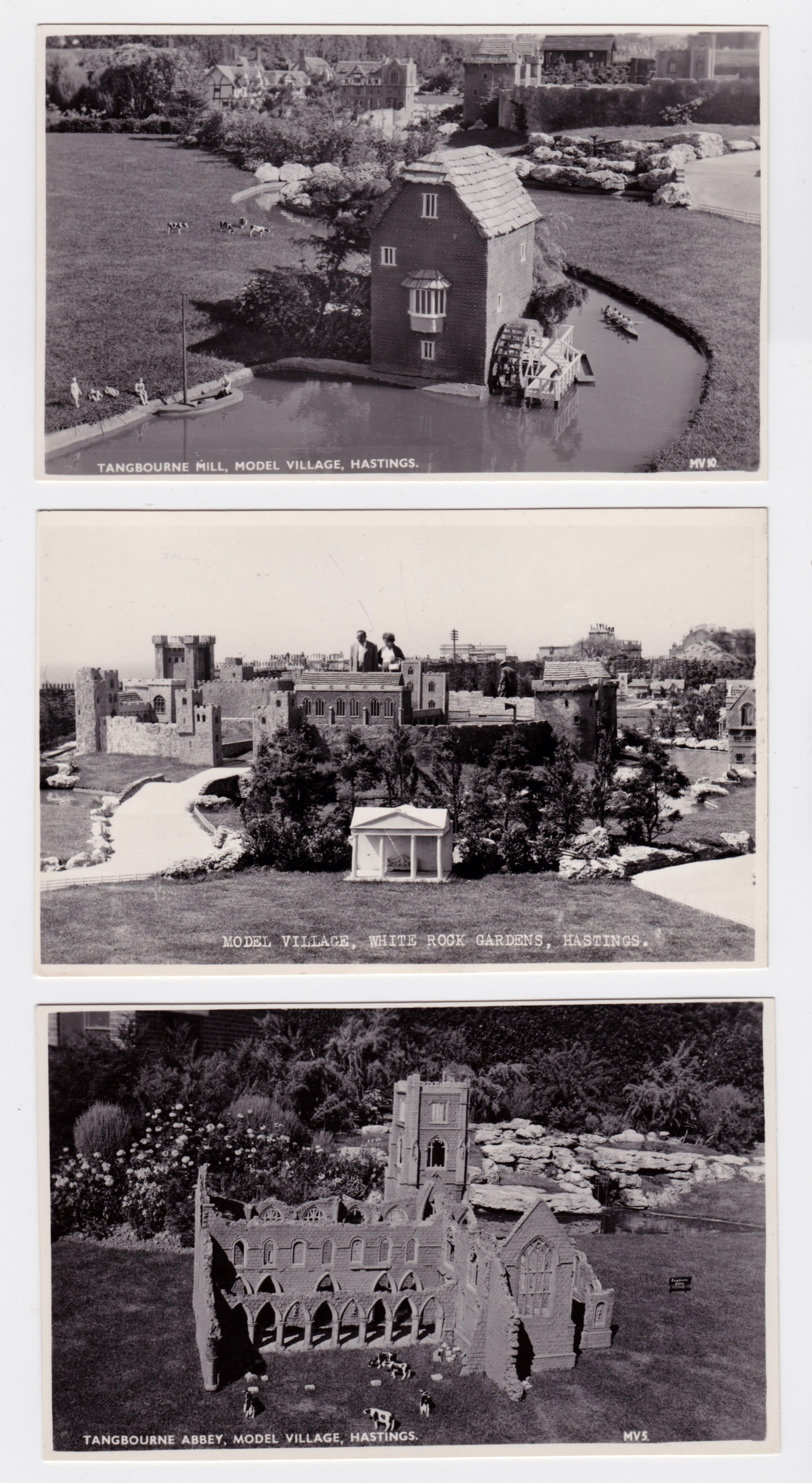 Here are the mechanically retrieved lost remnants of a lost world. 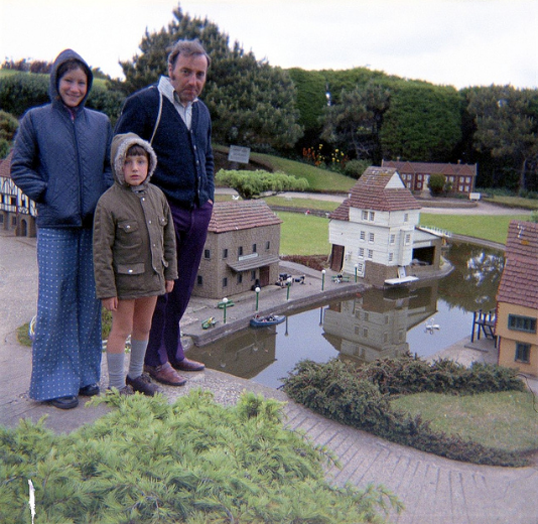 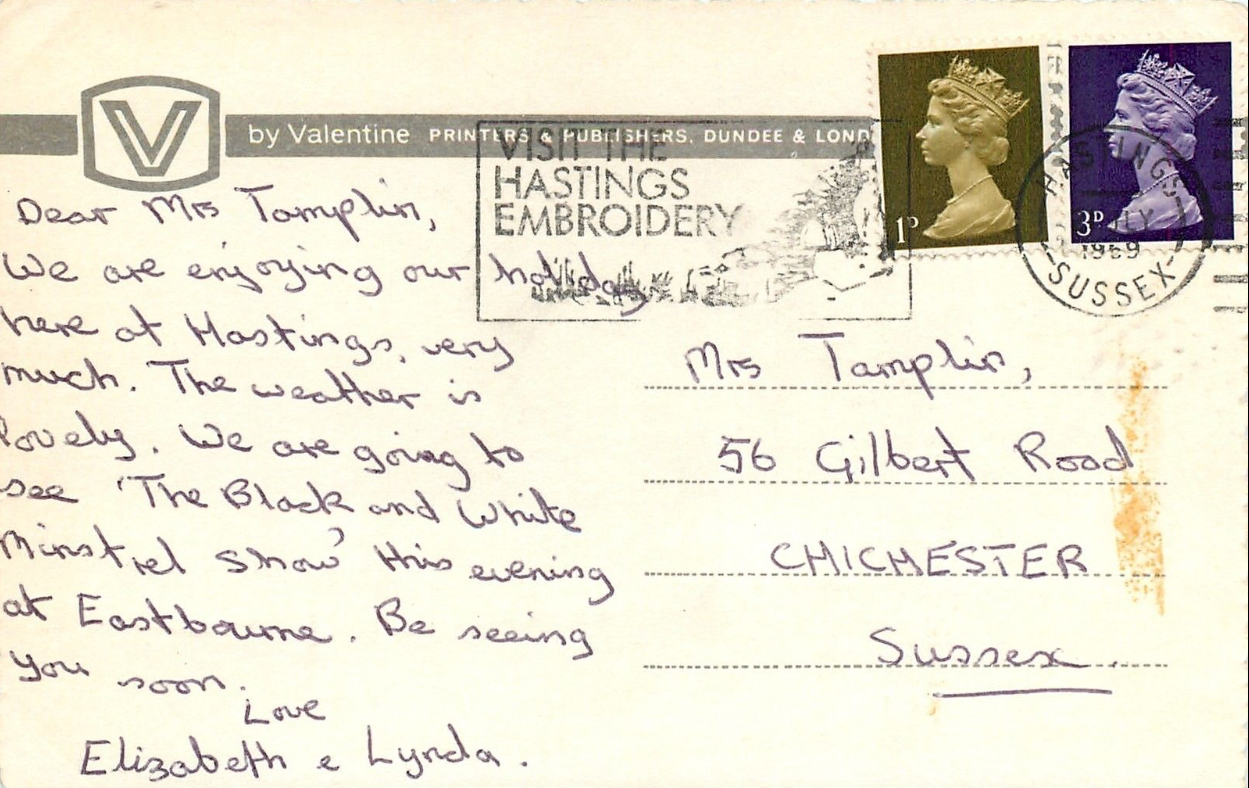 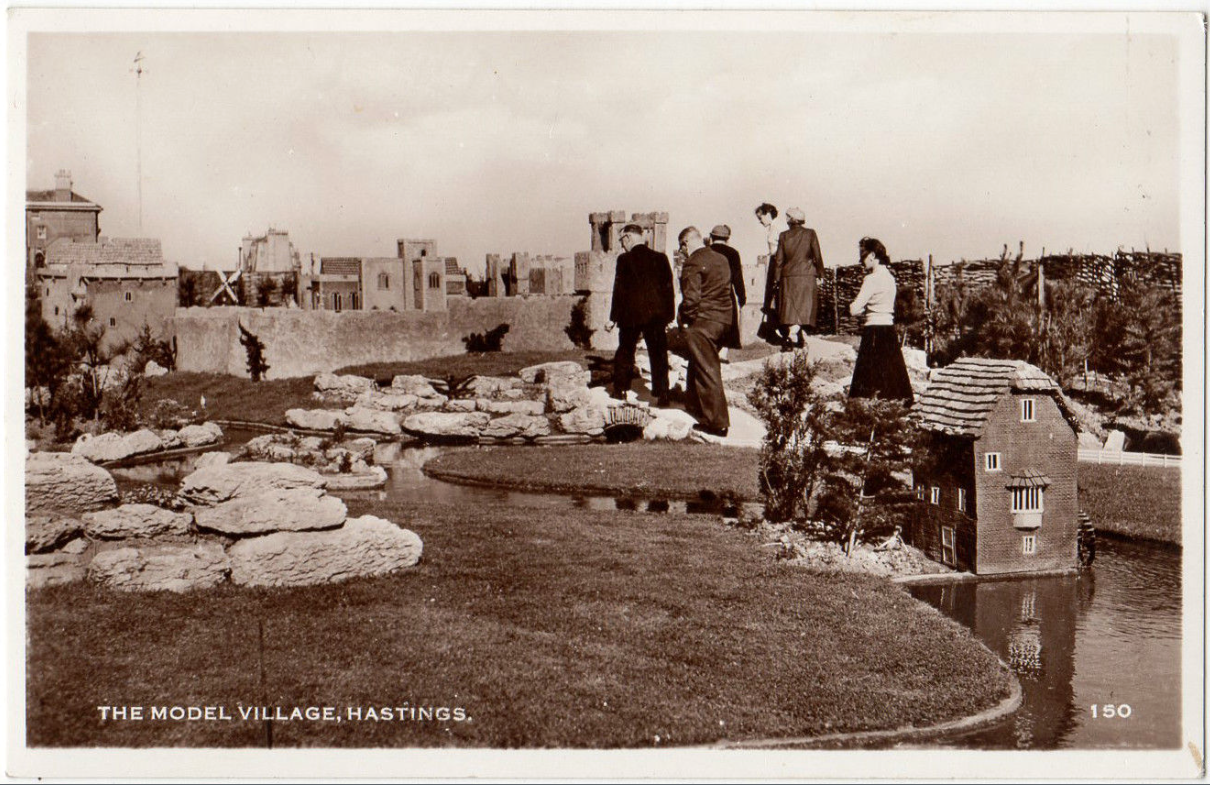 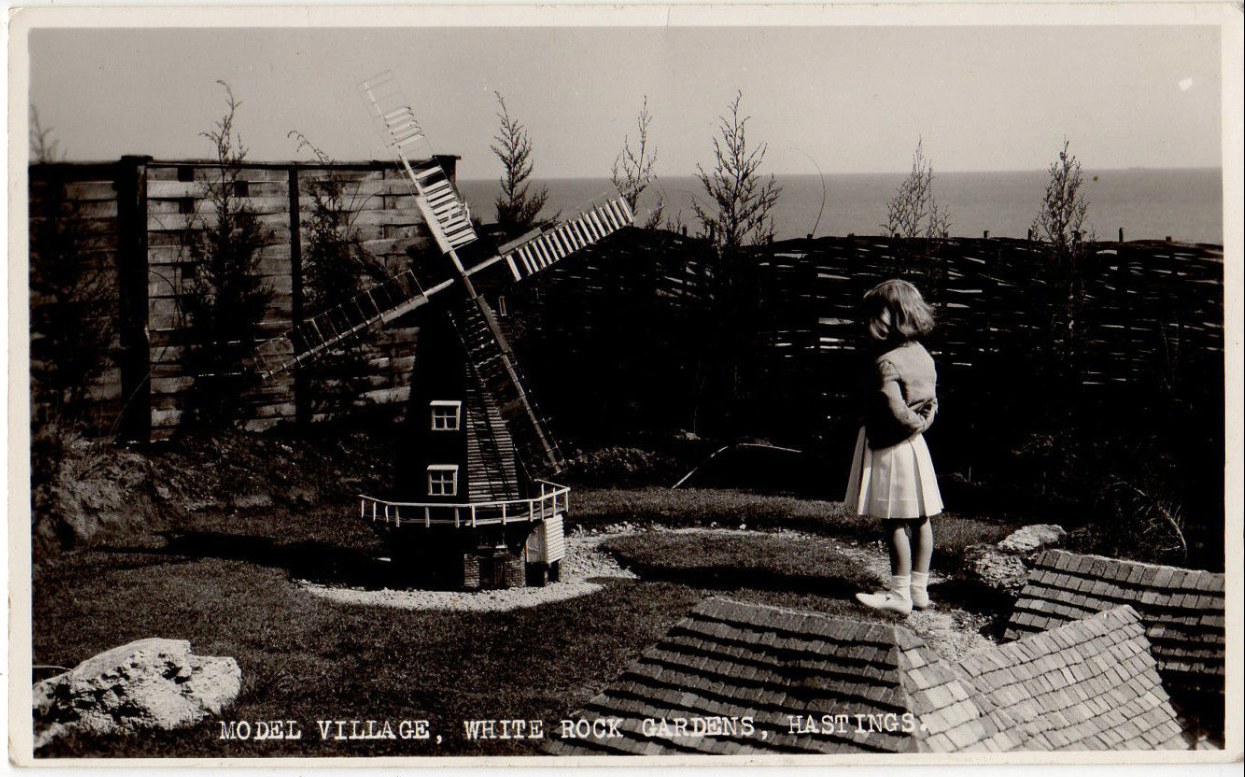 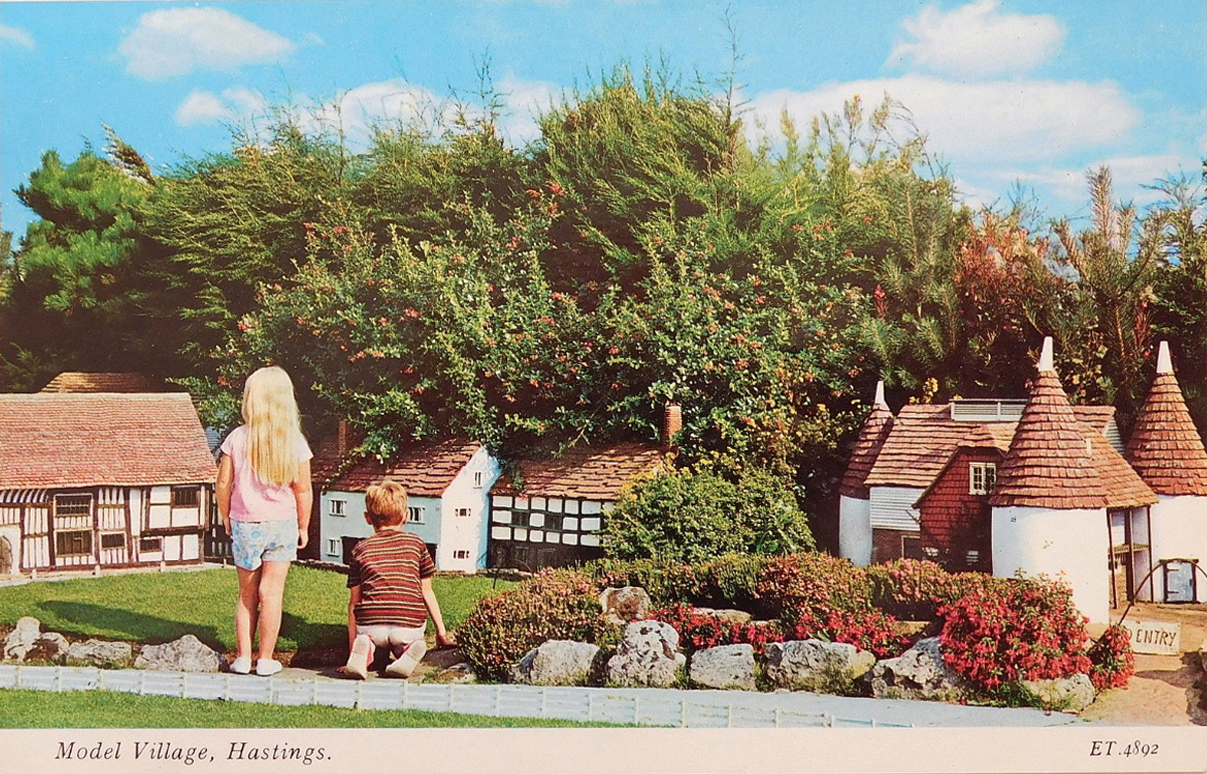 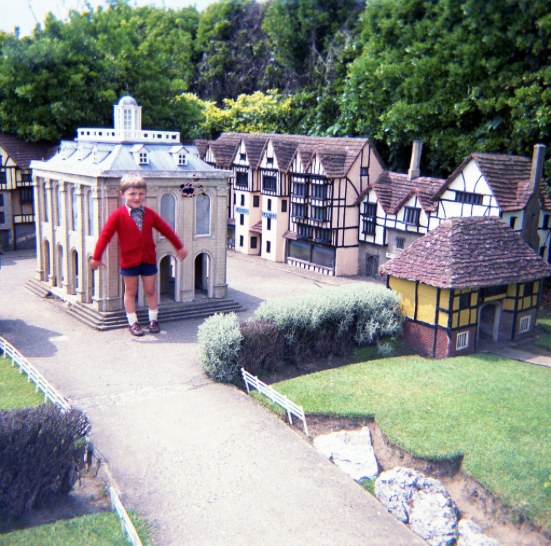 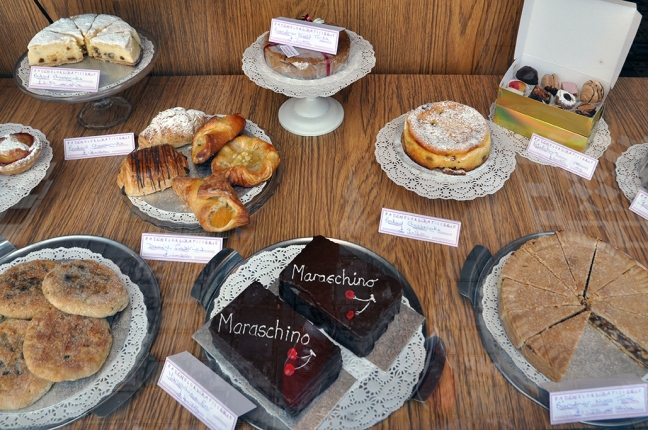 Idly meandering through Cliftonville, along Northdown Road, I chanced upon the most delightful of cake shop windows. Being something of an aficionado of cakes, shops and windows it seemed like an ideal opportunity to snap away, with customary broad-smiling, wide-eyed enthusiasm. Furthermore why not go in? I was met with the most charming of receptions from the patron Stuart Turner and staff – not unreasonably inquisitive regarding my impromptu picture taking, I explained my particular interest in the patisserie. The interior of the 50’s bakery, shop and café is perfectly preserved, with a little sympathetic restorative work. Well upholstered and formica topped the furniture is the finest of its kind, each table graced with fresh flowers, condiments and loving care and attention. An exquisite array of breads, pastries and cakes, resting on delicate doilies, displayed in glass fronted cases. I encourage you to visit, take tea, take cake, take away the fondest of sweet memories. 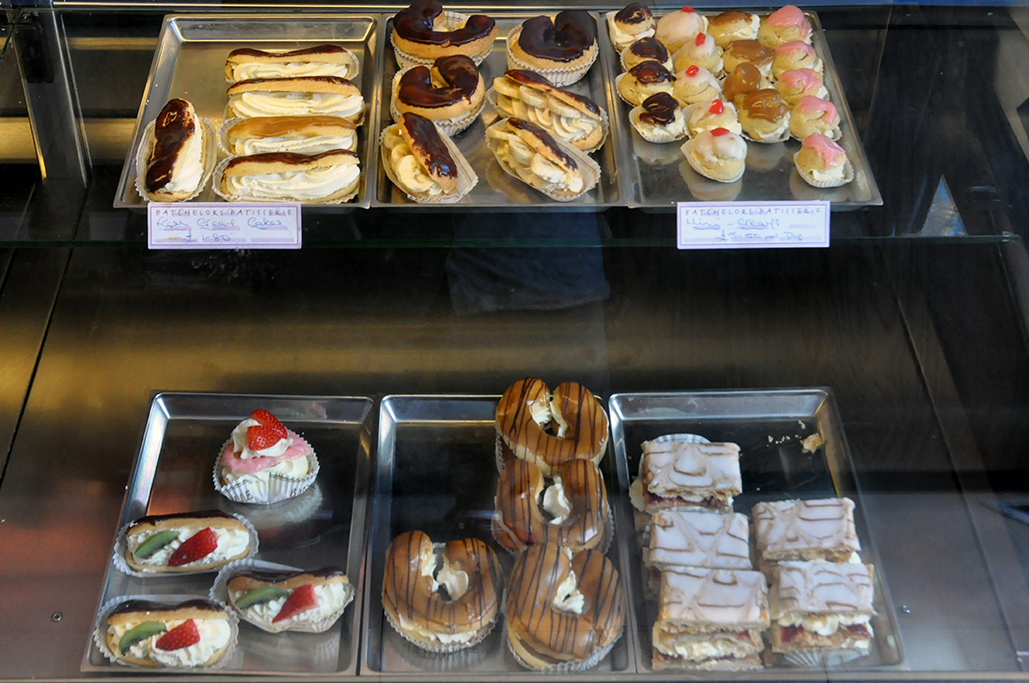 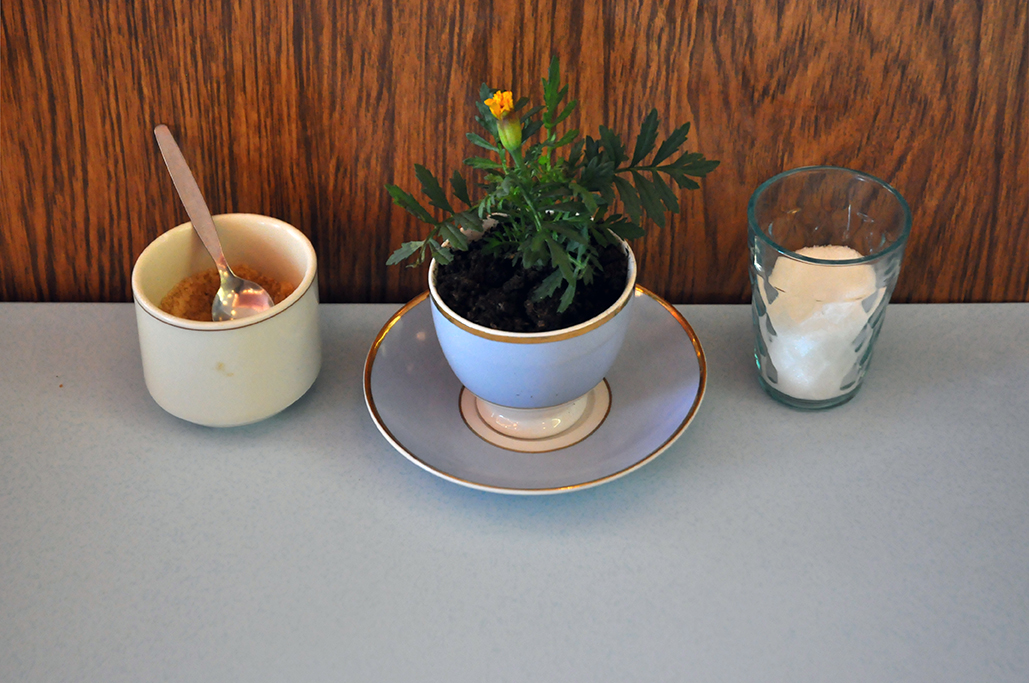 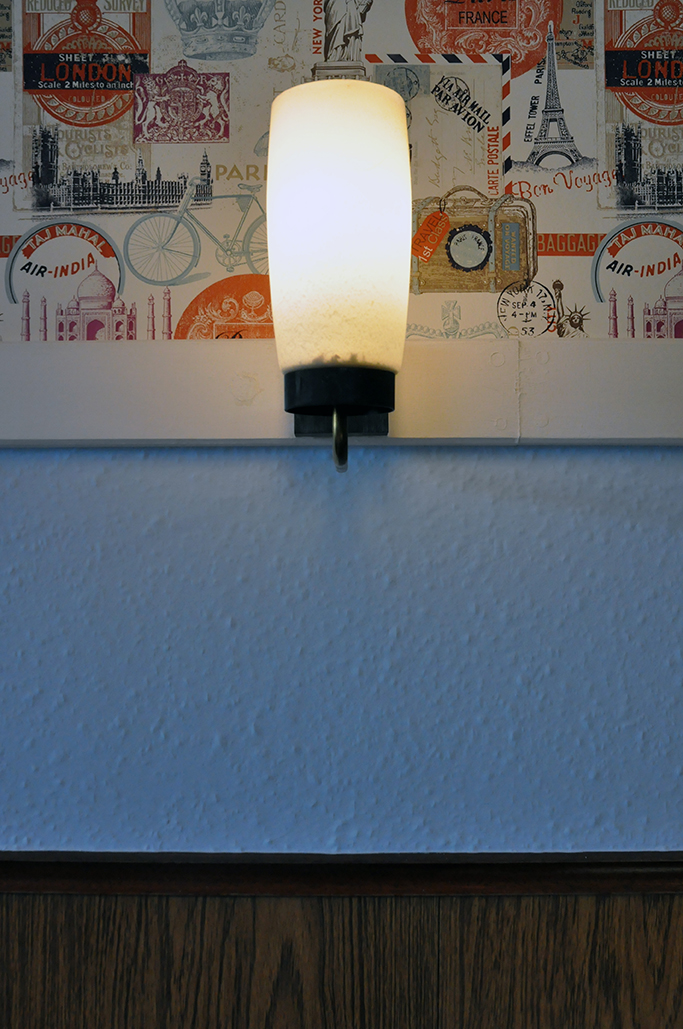 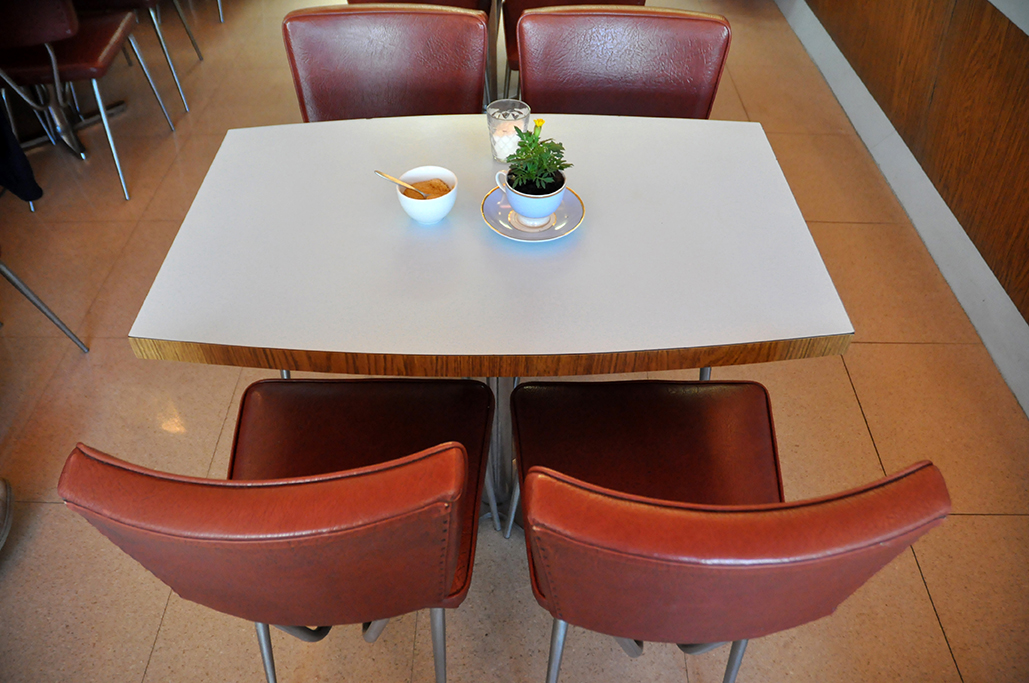 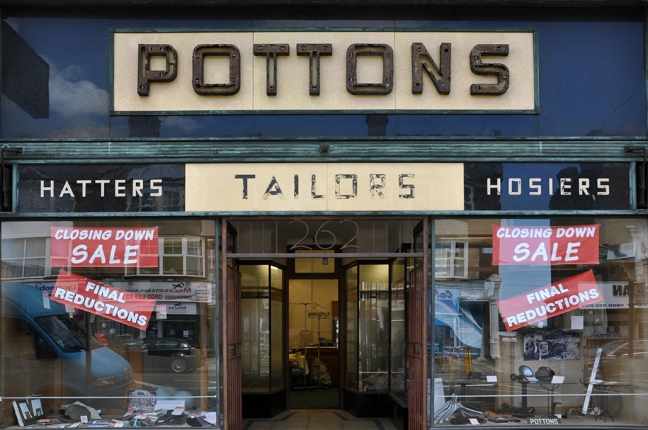 Should you, as I did wander down Northdown Road, Cliftonville, you will chance upon Pottons at 262.

By now however, ingress is more than somewhat inhibited.

The most exciting and extant period fascia, once gave way to oak fittings and fixtures festooned with all manner of menswear, exotic and plain accoutrements, now inaccessible.

A few sad remnants were on sale, administered in their final days by Lorraine, employed for 35 years in a family business, whose trade had once included made to measure, fine millinery and quality accessories for the discerning gent around town. 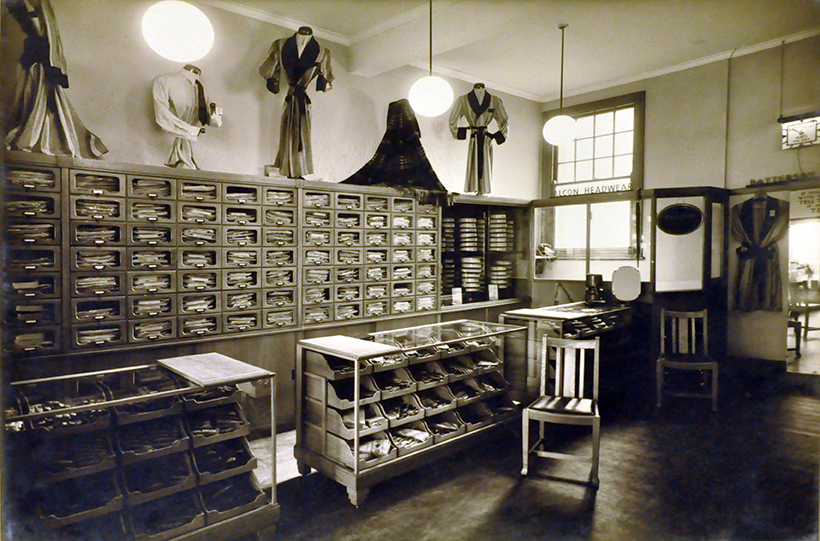 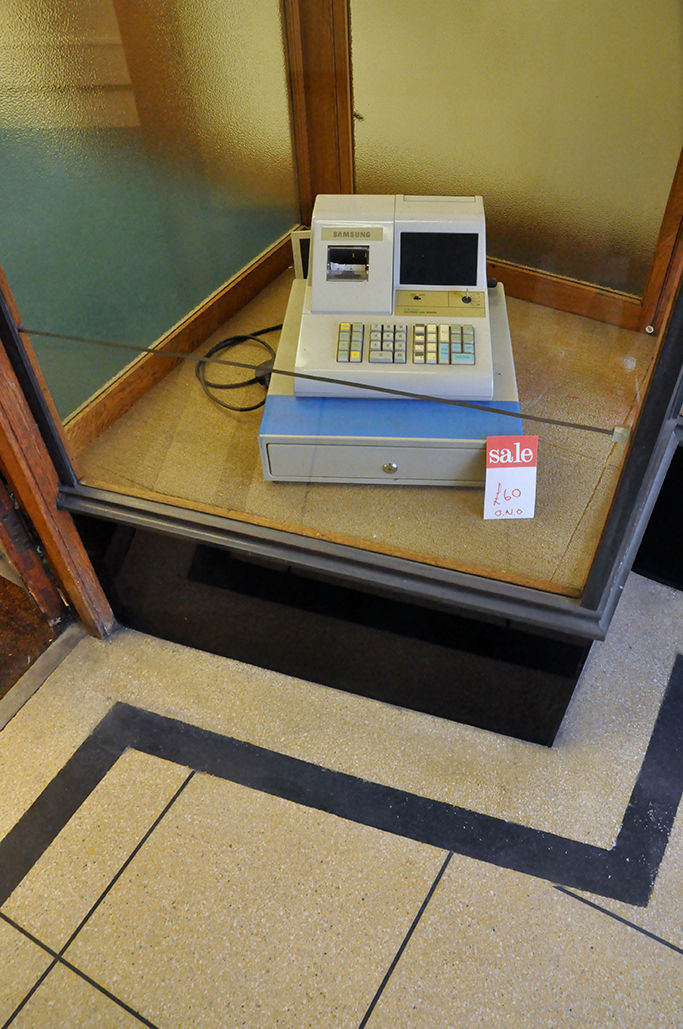 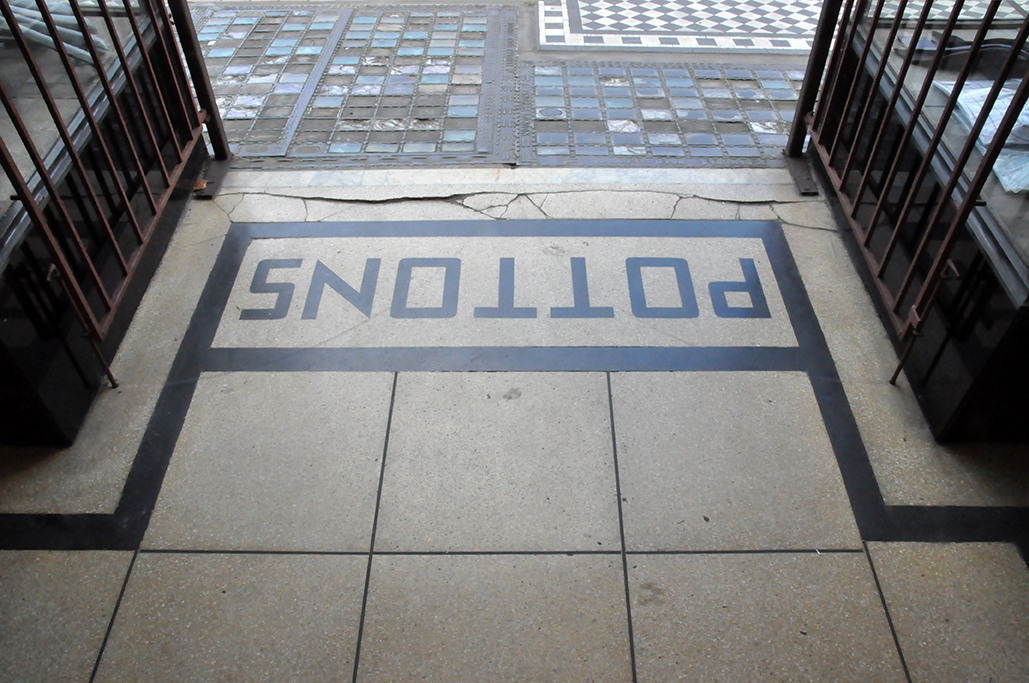 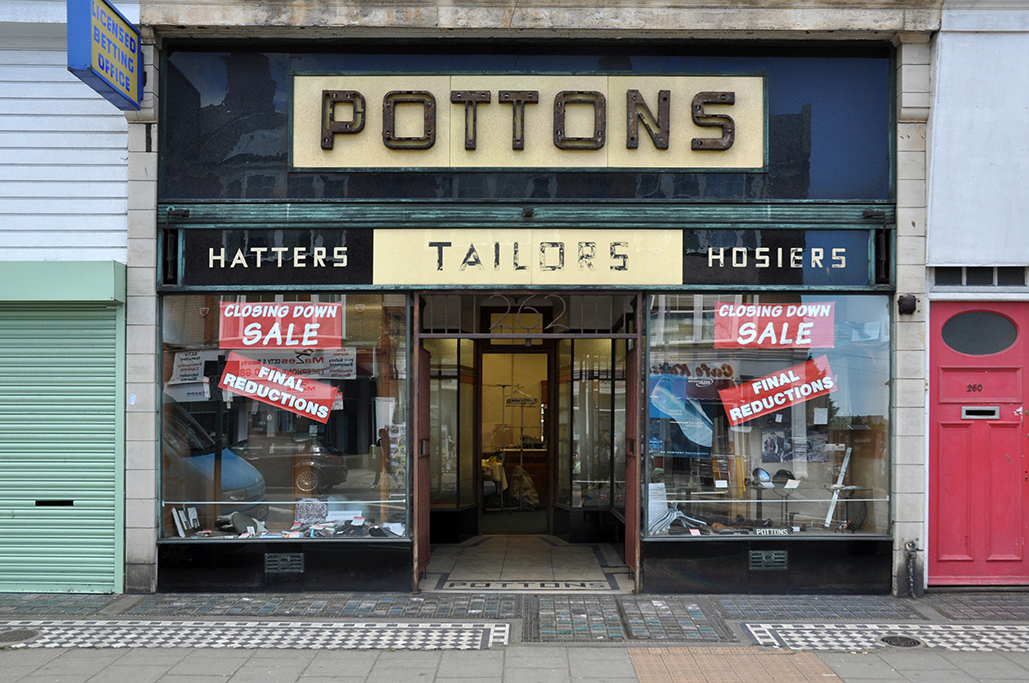 Every town worth its salt should have a decent second hand book shop.

Room at the Top – on the ever so elegant Market Square, centre of the Old Town and part of the ever enlarging nexus of vintage shopping.

Always at the most reasonable of prices – you can get a brew too!

So take an hour out to browse, pursue and lollygag in convivial surroundings.

Leave with bags full excitement and a broad grin.