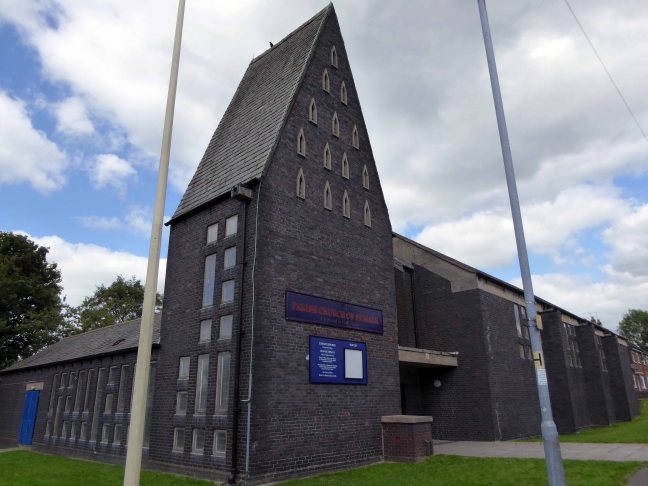 Life is full of little surprises, to turn from Middleton Road into Milne Street in downtown Chadderton and discover a triangular, blue-grey brick tower soaring into the September sky.

So solid geometries pierced by rectangular, triangular and angular gridded windows, deservedly Grade II Listed in 1998, made all the more extraordinary by its seemingly ordinary surroundings.

The whole an uplifting and embracing space, punctuated by the curved y-shaped wooden supports, rising to the timber framed roof structure.

It was a pleasure to meet the current incumbent Father Stephen and a privilege to spend some time exploring this altogether delightful and impressive church.

I suggest that you do the same.

G.G. Pace 1960-63 – Blue engineering brick; graduated slate to pitched roofs – low pitched to church and entrance and steeply pitched to tower. Concrete dressings around windows. Five sided aisled space, three walls being orthoganal and the liturgical north side being canted outwards to provide room for the choir. Entrance with narthex to west and west also is a small rectangular chapel. Corner site, the corner itself dominated by a low rectangular brick tower with a high gabled roof. Four bay nave, the bays separated by buttresses and with rectangular windows set in varying groups high in the wall. West wall of nave is visible, and secondary glazing has been sensitively installed over the west window between the western buttresses. Thick exposed board-marked concrete beam at eaves. On return elevation, tower is flush with small chapel, with irregular groups of rectangular windows to both. Rectangular leaded lights. Recessed entrance with two doors of timber and leaded-glazing in vertical strips. Liturgical north and south faces of the tower each has a stack of 14 small pointed louvres. Jutting gutter spouts in exposed board-marked concrete.

A fine example of Pace’s idiosyncratic manner, this church shows the influence of the Liturgical Movement, especially in the forward placement of the altar.

A fine companion to Pace’s William Temple Church in Wythenshawe. 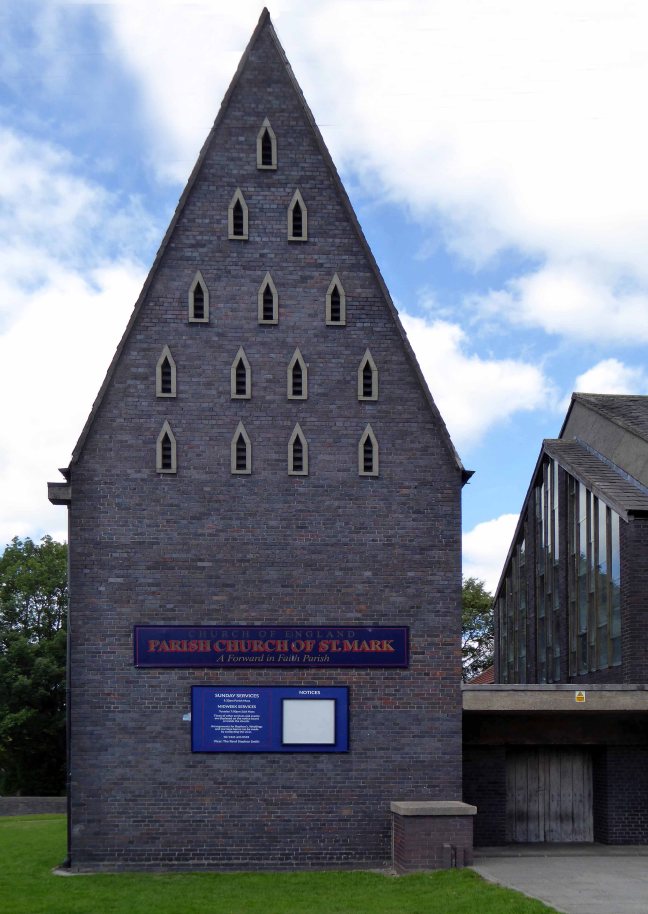 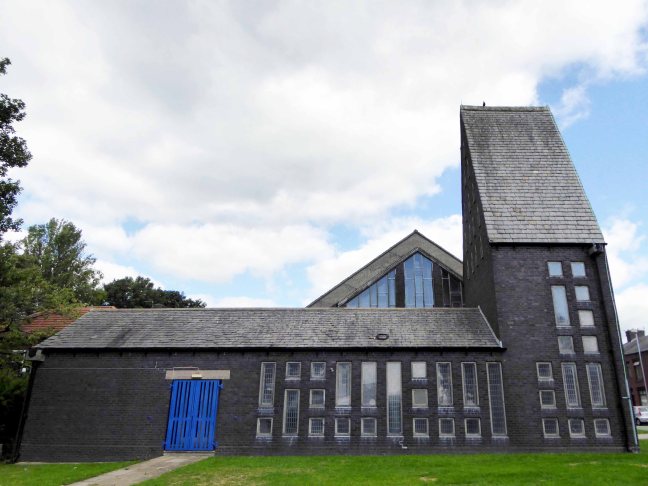 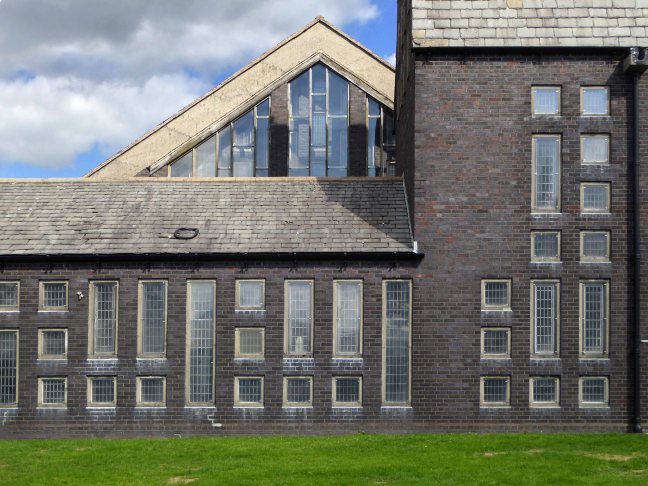 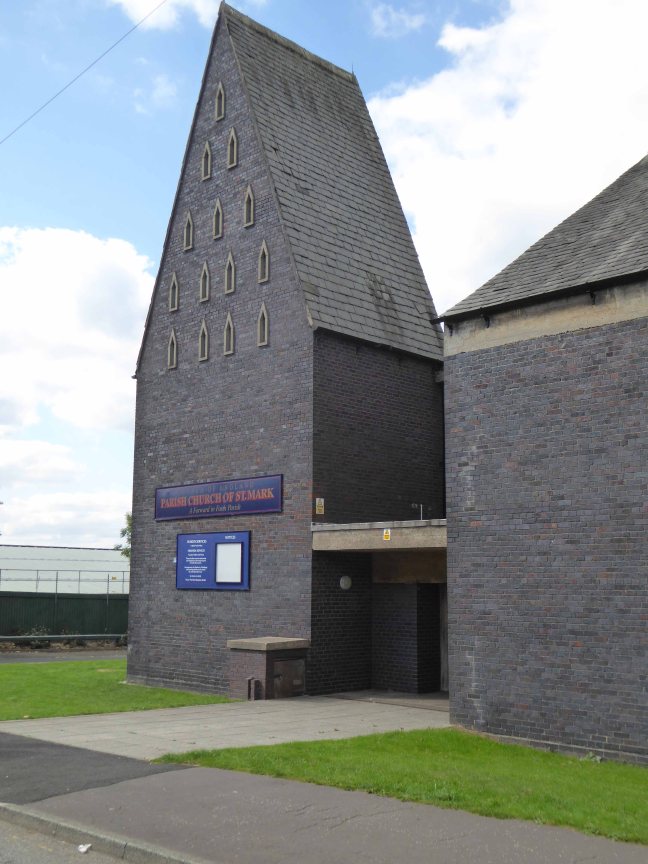 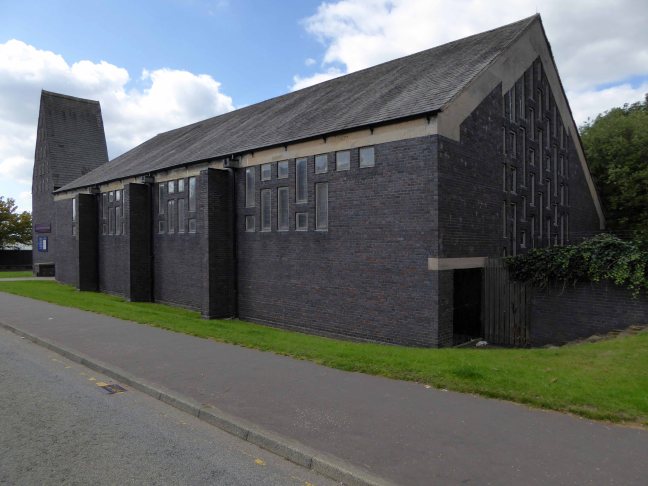 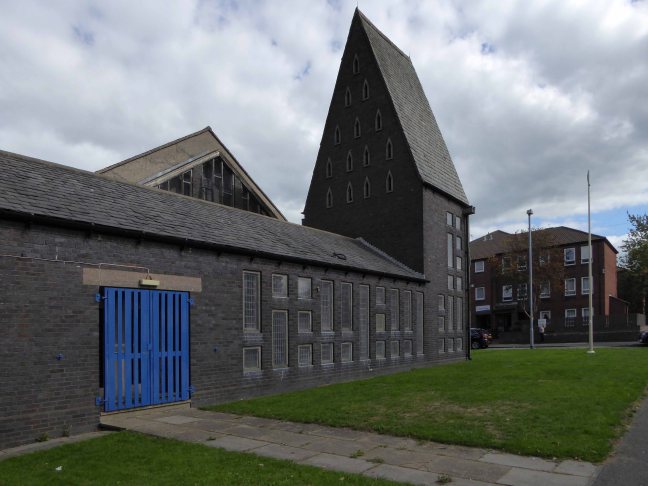 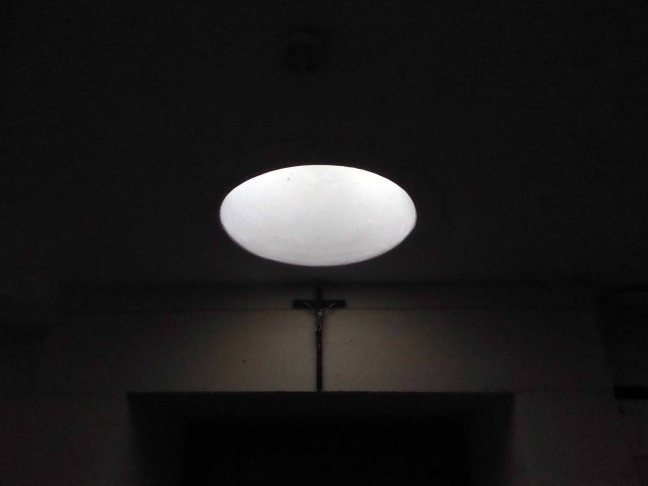 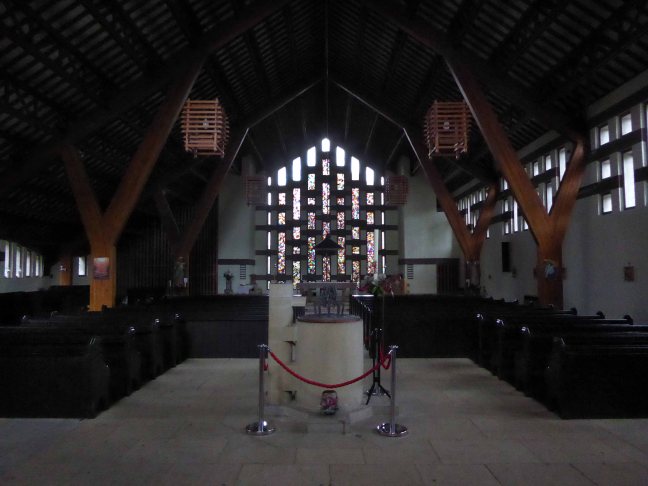 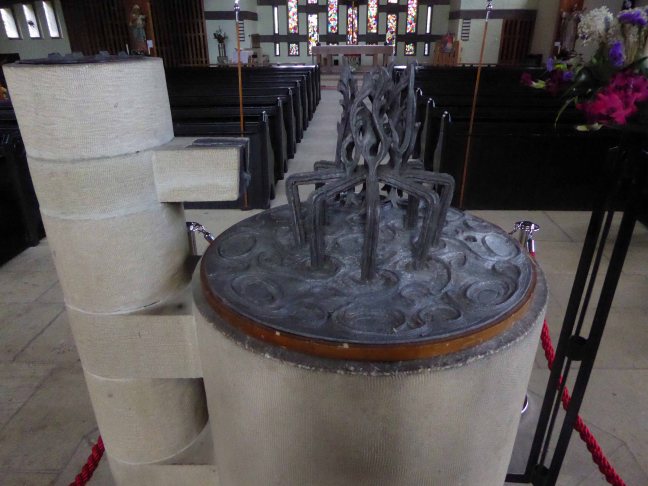 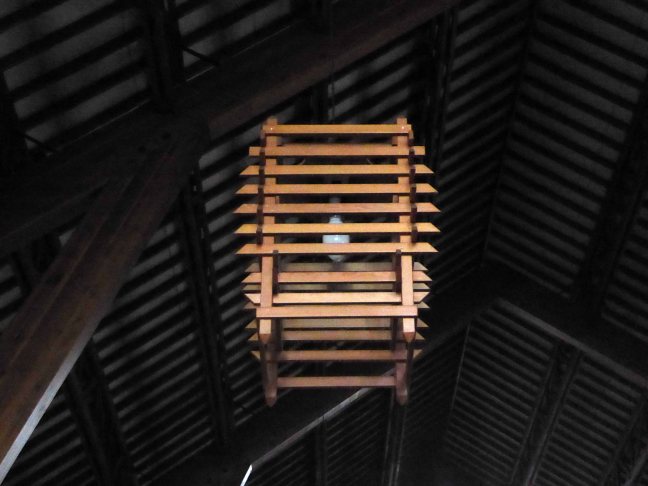 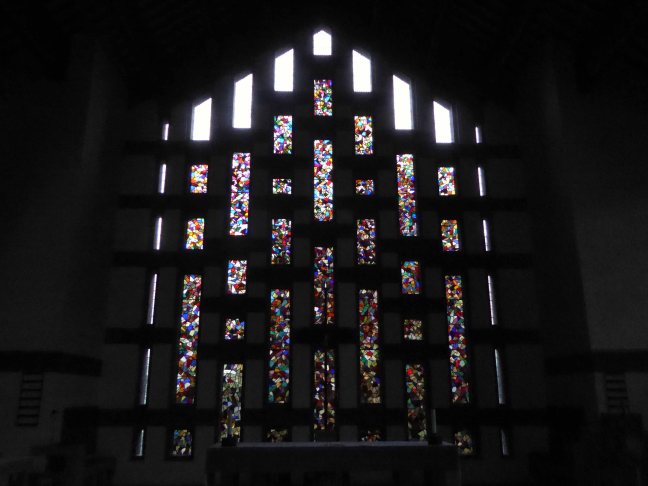 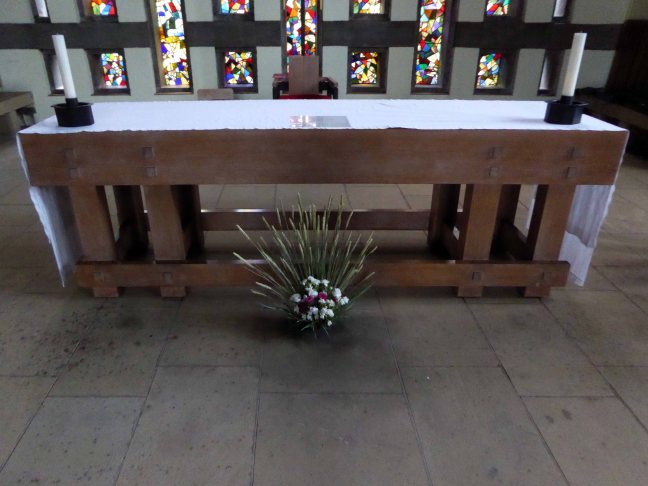 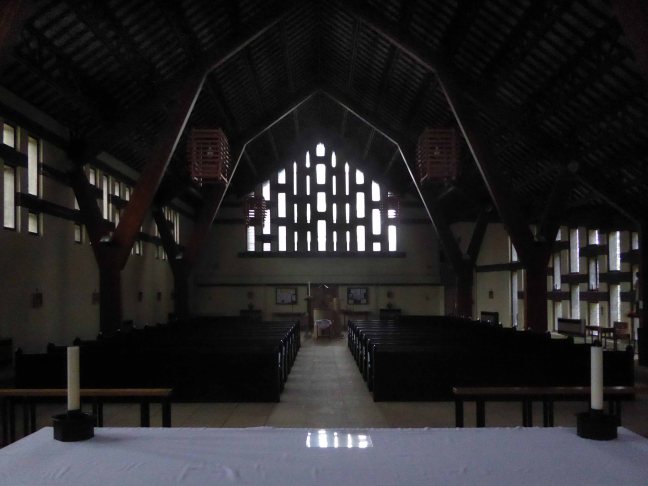 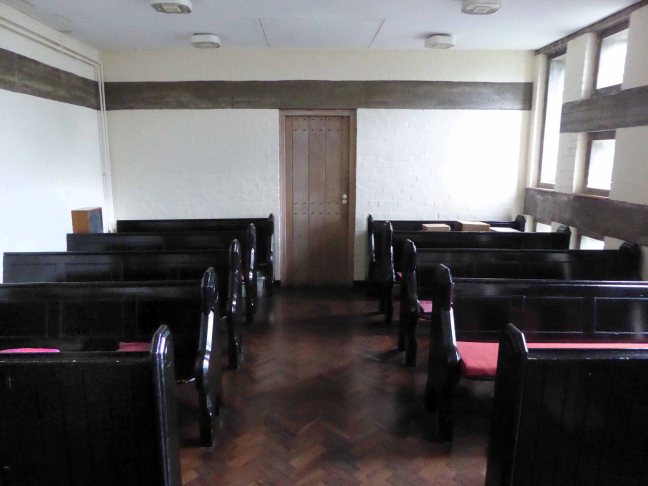 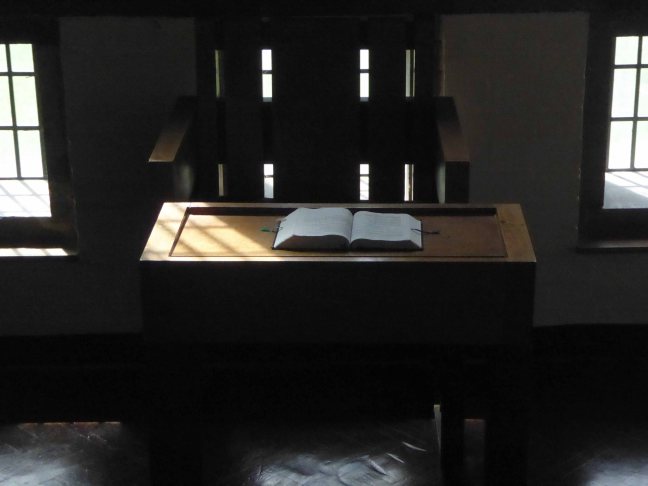