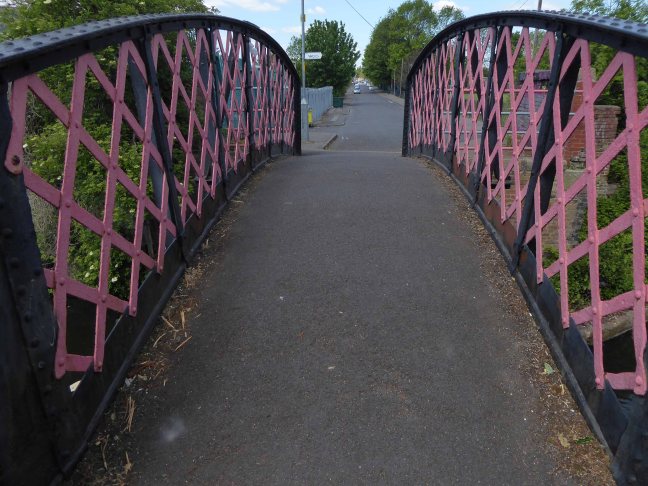 This is a short walk from Mediprop to Guide Bridge Station under half a mile, over two hundred years of history.

Hovering above ground level, rising above the rail.

Between the Ashton Canal.

The canal received its Act of Parliament in 1792. It was built to supply coal from Oldham and Ashton under Lyne to Manchester. The first section between Ancoats Lane to Ashton-under-Lyne and Hollinwood was completed in 1796.

The Great Central Railway in England came into being when the Manchester, Sheffield and Lincolnshire Railway changed its name in 1897, anticipating the opening in 1899 of its London Extension. On 1 January 1923, the company was grouped into the London and North Eastern Railway.

I had walked beside the elevated path, alongside the canal coming home from school, rode by it whilst working as a Guide Bridge goods guard.

This was busy railway, steel coal, oil and people hurtling back and forth across the Pennines, under the DC wires of the Woodhead Line.

One memorable night the Royal Train stayed overnight, in what are now the SB Rail OTM sidings.

Toffs in dinner jackets were leaning from the windows, as we gazed in awe from the platform.

Along with the Jone’s Sewing Machine Company all long gone.

Thomas Chadwick later joined Bradbury & Co. William Jones opened a factory in Guide Bridge, Manchester in 1869. In 1893 a Jones advertising sheet claimed that this factory was the – Largest Factory in England Exclusively Making First Class Sewing Machines. The firm was renamed as the Jones Sewing Machine Co. Ltd and was later acquired by Brother Industries of Japan, in 1968. The Jones name still appeared on the machines till the late 1980s.

From 1987 until 1999 Brother were sponsors of Manchester City FC.

The site is now home to new homes and homeowners, as the are seeks to capitalise on the spread of wealth from Central Manchester.

Time changes everything except something within us which is always surprised by change.

Let’s take a walk together.