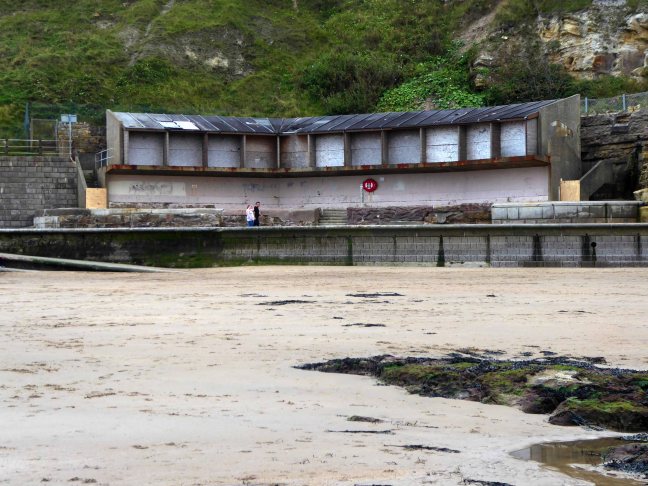 Whole chunks of the land fall in the sea, eventually.

The South Bay Gardens were slipping away.

Some of the oldest sun bathing chalets almost became an Arts Hub.

Seaside chalets were under threat, with the cause believed to be the failure of a retaining wall.

The swimming pool has been and gone, only an empty shell remains.

There are speculative plans and piecemeal repairs, but these are difficult times, and attracting substantial finance and flocks of tourists to revitalise the town, is no simple matter.

From 2011 I have visited South Bay, intrigued by all the above, but there’s a special place in my heart for these concrete chalets.

They never get a mention.

Here they are some years ago.

They stand forlorn on the concrete shore overlooking an indifferent North Sea, hoping for a future in an uncertain age.

As I snapped I chatted to a local ANTIFA Anarcho Punk – ex Mansfield Miner and political activist, he feared that they would be swamped by some tidal wave of gentrification.

If so when, not soon.

As a post script I have been informed that the site was used as a kid’s den in the CBBC TV series All at Sea!