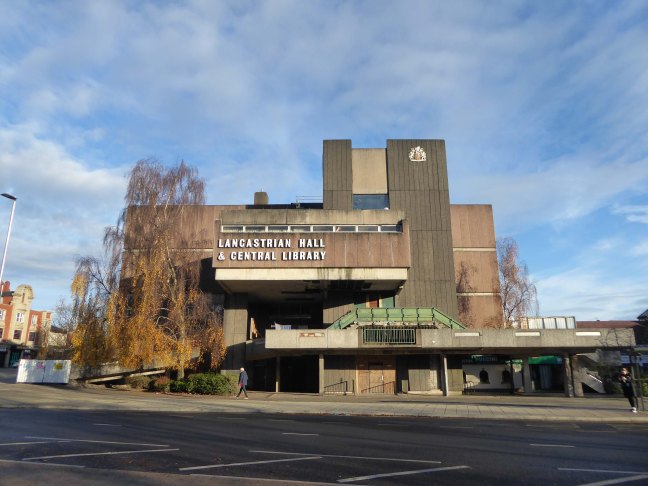 Constructed at the tail end of the Sixties – the last gasp of Municipal Modernism in the Borough, providing education, edification and entertainment for the local population.

The fountain is gone, the building is closed – the party’s over.

The Fast Cars are history – well they were history, until I was told that they are still speeding along!

A council has spent £348,000 on a masterplan for a town centre that the public has never seen.

Consultants have been used to come up with ideas to regenerate Swinton in Salford.

The town centre is dominated by the imposing Lancastrian Hall, opened in 1969, with an adjoining shopping mall.

The hall housed a council library and was used for civic and community meetings, wedding receptions and election counts.

But it has been closed since 2015 after the library moved to the new Gateway Building on the other side of Chorley Road.

So this magical structure of stairways, undercrofts, elevated walks and majestic concrete clad volumes is under threat.

Swinton and the Lancastrian Hall deserve much better.

Over 550 people took part in the recent visioning work, and we are grateful for their time and valuable contributions.

An overwhelming majority of those who shared their views saw Swinton as a good place to live and bring up a family – somewhere friendly, with a strong sense of community.

People valued their local green spaces, but strongly felt that there needed to be more investment in the town centre, and a plan to tackle empty buildings and shops.

Overall, people felt that Swinton needed to be a more vibrant place, with more going on – and more reasons for people to visit and spend their leisure time there.

This is an opportunity to create tomorrow’s local centre, but that does rely on removing the Lancastrian Hall, rethinking the shopping centre, and repurposing the Civic Centre and the spaces around it.