Welcome to the world renowned shopping and entertainment destination.

Intu, who own the Manchester shopping centre, expects to breach covenants on its current debts as shopping centres struggle in the face of the coronavirus pandemic.

This is a journey from the corner shop to the high street, by the banks of the Bridgewater Canal, a whole retail history told during troubled times.

The Trafford Centre opened in 1998 and is the third largest shopping centre in the United Kingdom by retail size. It was developed by the Peel Group and is owned by Intu Properties following a £1.65 billion sale in 2011 the largest single property acquisition in British history. As of 2017, the centre has a market value of £2.312 billion.

The advent of the motor car, and the development of out of town shopping has seriously affected the viability of the traditional town centre and the almost long gone local shop.

And now in turn the mall is threatened by the increase in online trade and the current lockdown.

The Trafford Centre reopens on June 15th, no doubt the sensation seeking, thrill a moment shoppers will return in droves, to further satiate their unquenchable desire for stuff and more stuff, in a pseudo Romano Soviet oligarch setting.

As of Monday 8th the space was mostly devoid of both customers and cars – there are two home stores open, we arrived on foot and took a look around. 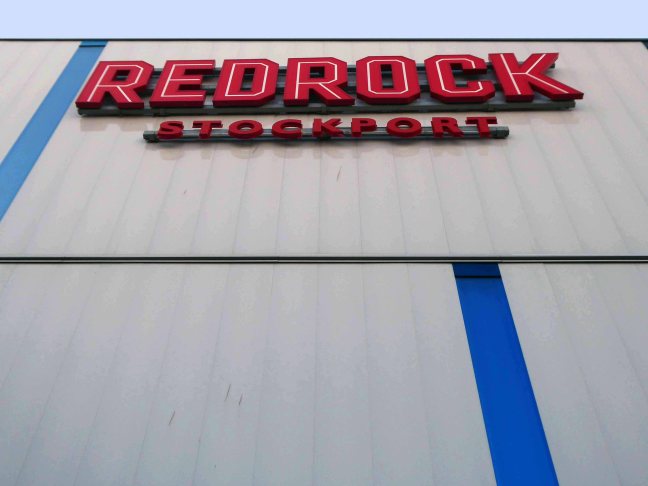 Much maligned, universally loathed – the Stockport leisure facility everyone loves to hate.

No more darkness, no more night.
Now I’m so happy, no sorrow in sight.
Praise the Lord, I saw the Light.

The area between Princes Street and Bridgefield Street was a tight warren of housing, shops and industry, eventually demolished in the 1970s, designated as slum clearance.

Prior to the arrival of the ring road the space remained undeveloped and turned over to car parking.

Little changes as the M60 is opened.

So for over forty years the land lies pretty vacant, but far from pretty.

Until 2015 when planning permission is granted for the £45m Redrock leisure scheme, which includes a 10-screen cinema, restaurants and shops.

This is a very exciting time for Stockport. Developments such as these help our ambition of putting Stockport on the map to bring more people to work, shop and socialise here. We have been keen to involve the public in plans for both developments, by holding various consultation exercises.

So good bye to all this, the local authority is making serious progress, developing Stockport’s future, against a background of structural decline and the dominance of Manchester city centre.

The architects for the scheme are BDP – the building was not well received as it was awarded the Carbuncle of the Year 2018.

Judges were left unimpressed by the – awkward form, disjointed massing and superficial decoration, while readers called it an absolute monstrosity.

Though to be fair The Light has a house style that leans heavily towards the anonymous industrial shed.

The development has however become a commercial success – once inside customers seem more than happy with the facilities.

The people of Stockport have welcomed us with open arms since opening in 2017. We’ve now had over one million guests join us for everything from the latest blockbusters to opera, theatre and concerts.

It’s been that busy that we’ve just added two additional screens and now offer freshly made pizzas, burgers and sliders. We’ve got plenty more exciting additions up our sleeve for next year too!

Yet it continues to attract wave after wave of criticism on local Facebook groups, perhaps the former car parking area should be reinstated, or the Victorian slums rebuilt?

I went to take a look for myself during lockdown – see what you think.

Real attempts have been made to make the landscaping and street view amenable to pedestrians, it feels like an attractive and safe urban space.

The view from the north is less successful, the scale and decorative work looks over ostentatious and confused.

Look away if you wish, it won’t be here forever – and if you fancy something different try The Plaza or The Savoy.

That should keep everyone happy shouldn’t it?