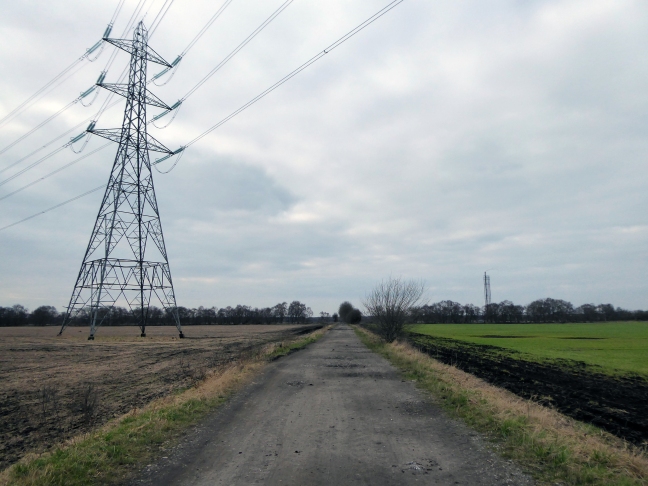 Flat as can be, between rail and river, flat.

Crisscrossed by tramways and drainage ditches.

Carrington Moss is a large area of peat bog near Carrington in Greater Manchester, England. It lies south of the River Mersey, approximately ten miles south-west of Manchester, and occupies an area of about 1,100 acres..Originally an unused area of grouse moorland, the moss was reclaimed in the latter half of the 19th century for farming and the disposal of Manchester’s waste. A system of tramways was built to connect it with the Manchester Ship Canal and a nearby railway line. During the Second World War the land was used as a Starfish site and in the latter half of the 20th century, a large industrial complex was built along its northern edge. More recently, several sporting facilities have been built on Carrington Moss. Today, the land is still used for farming and several nature reserves have been established within its bounds.

Parts of Carrington Moss are accessible to the public over several rights of way.

Industrialisation of the moss took place from 1947–1952 when Petro-Carbon ltd began to build what would later become known as the Shell Site. The estate was leased on 1 October 1968 to Shell Chemicals, who in 1957 had purchased a propylene oxide plant along the moss’s northern edge. Shell had built an ethylene oxide plant in 1958 and began to produce polyether polyols the following year. Council housing was built nearby, at Carrington and Partington, for workers and their families. By 1985 the Shell plant had a turnover of about £200M and employed 1,150 people, but a major restructuring of the business reduced the workforce to less than 500 by 1986. By 1994, four distinct plants operated on the 3,500-acre (14 km2) site, producing a range of chemicals, and materials including polystyrene, polyethylene and polypropylene. In 2005 it was reported that Shell would close their polyols and ethoxylates units, a decision which came into effect in 2007. The estate is currently managed by chartered surveyors Bell Ingram. Lyondell Basell operate the last remaining chemical plant on site.

This is the beleaguered site, still farming, remnants of rail, traces of tipping and vestiges of industry.

Plans are afoot – including of course indicative multi-modal routes.

Hundreds of campaigners fear endangered wildlife at Carrington Moss will be ‘decimated’ if plans to build a new town on green belt land go ahead.

They also argue the development would be ‘catastrophic’ in terms of how it would impact the environment.

Storm Christoph showed that Manchester is susceptible to the adverse effects of extreme weather events, which are forecast to become more regular occurrences.

Greater Manchester Labour for a Green New Deal argue that we must abandon the idea of developing on greenbelt, and instead embrace bold alternatives which reflects the urgency of the climate crisis﹣starting with sites like Carrington Moss.

This is an area in liminal limbo, the pressures of the modern world leaning on its very being, as ash, alder, badger, field mouse, and kestrel give way to Wainhomes.

Where then will the wanderer wander, in search of solace?

Ending our journey at the long gone Partington Station

The remains of the subway.

The company of J. C. Edwards Ruabon Ltd, was based in Ruabon, Denbighshire, and was active from 1903 to 1956 as a brick, tile and terracotta manufacturer from its works at Tref-y-Nant, Acrefair, Albert Works, Rhosllannerchrugog, and Pen-y-bont, Newbridge, Denbighshire.