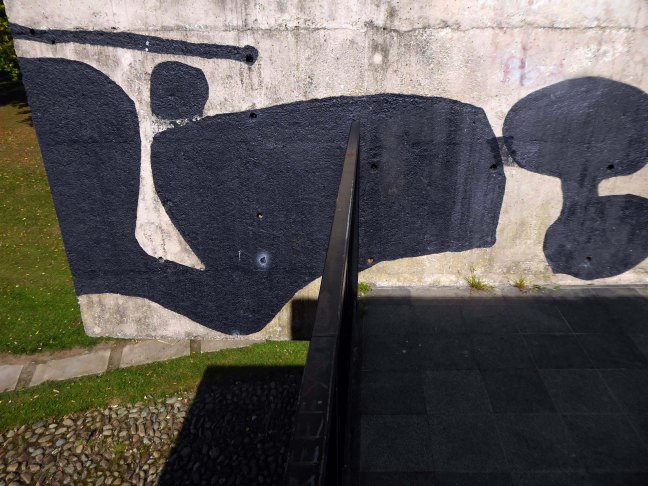 An architecture and sculpture of purely abstract form through which to walk, in which to linger and on which to play, a free and anonymous monument which, because of it’s independence, can lift the activity and psychology of an urban housing community on to a universal plane.

The idea for the Apollo Pavilion was the culmination of Victor Pasmore’s involvement with the planning and design of the new town of Peterlee in County Durham which began in 1954 with his appointment by A.V. Williams, the General Manager, as a consultant architectural designer to the Corporation. The brief was to inject a new initiative into the new town’s design, which had been limited by practical and financial constraints. The early departure of Berthold Lubetkin from the original design team, and the limitations imposed by building on land subject to underground mining, had led to a deterioration in the quality of the architecture being produced at Peterlee.

At Peterlee Pasmore worked initially alongside architects Peter Daniel and Franc Dixon to develop the Sunny Blunts estate in the south-west area of the town, though by the time the Pavilion was built Dixon had left and the team included the more experienced Harry Durell, Colin Gardham and landscape architect David Thirkettle. Pasmore continued to be involved with Peterlee until 1978 and designed the Pavilion as a gift to the town.

It was restored in 2009 with the help of a Heritage Lottery Grant of £336,000. The restoration restored the south side stairway – the other had not been part of the original design, reset the cobbles in the surrounding area and reinstated the two murals on the north and south walls.

A metal gate restricting access at night time to the upper level has been introduced, and the original lighting scheme, out of action since the mid 1970s, has been reinstated.

Along with the Renold’s building mural at UMIST.

I jumped the X9 bus and headed for Peterlee – walked the wide open streets in search of signs.

There were no signs.

I found it instead by chance and instinct.

Peterlee was to be the miners’ capital of the world and was named after the well-known miner and councillor Peter Lee.

Architect Berthold Lubetkin’s plans included everything from football pitches and tennis courts, to a rock-climbing centre and a zoo. However, to Berthold Lubetkin’s frustration, the National Coal Board opposed his plan and, after numerous failed attempts to agree on the siting of housing, Lubetkin quit the project in 1950. He later gave up architecture altogether and took up pig farming.

It remains a grand place to live it seems, tidy housing set in rolling greenery.

There are no longer coal mines or miners.