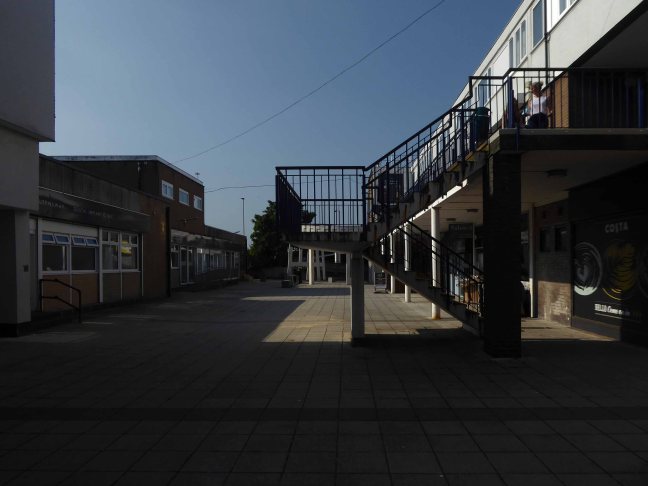 Whilst cycling twixt Redcar and Newcastle one sunny Monday morn, I espied a tower on the distant horizon.

I pedalled hurriedly along and this is what I found.

Across the way the cosmically named Astronaut pub known locally as the Aggy.

Though all it seems, is not well in outer space:

Locals say punters are creating a giant toilet next to a Billingham pub – and performing sex acts.

I wouldn’t disregard what they say, and I can’t say that didn’t happen, said boss Jordan Mulloy.

I know urinating goes on from time to time but people do it outside every pub – anyone I catch doing it will be barred.

The pub stands at the outer edge of the West Precinct.

The precinct sits beneath the Civic Offices.

And has a ramp leading to the roof top parking.

Next door the earlier Queensway Centre.

In November 2013, a time capsule was buried in front of The Family, under a stone with the inscription Forever Forward 30 11 2013.

The capsule is not to be unearthed until the year 2078.

Twenty million pound bid to take back control of the centre of Billingham.

The council says: Proposals include addressing the physical condition of Billingham town centre in support the Council’s ambition to take back control of the centre. Redevelopment would solve the challenges of changing retail trends that are contributing towards excess retail space and high vacancy rates.

This includes exploring options for mixed-use redevelopment and high-quality public spaces that improve accessibility within the town centre and a modern retail offering.

La Ronde’s distinct cylindrical form comes from the car park access ramp that winds around the stair core to the upper floors of the club. The elevated drum-like form inset with cross latticed concrete webs was cast entirely in-situ.

In 1960, Billingham Urban District Council, began one of the most ambitious new leisure centres in Europe. The Forum was funded by the district’s new-found wealth – a product of the local petrochemical industry.  It was designed by local architects Elder Lester and Partners and brought together a variety of recreational activities including an ice rink, swimming pool, sports centre, theatre, and bar all under one roof. The Forum opened in July 1967 to great enthusiasm.  Weekly attendance over the first six months was between 20 000 and 30 000 people, far exceeding all expectations.

The inclusion of the theatre alongside the sports facilities broke new ground in recreational planning and in the shift from sport to the broader notion of ‘leisure’, the Forum predated architectural thinking of the time by nearly a decade.  The building’s form is derived from the functions within, expressed in a variety of bulbous elements.  The most distinctive is the canopy of the ice rink roof which is hung using steel cables running the length of the roof and cross-braced to achieve a clear 73m span.

Something Concrete and Modern