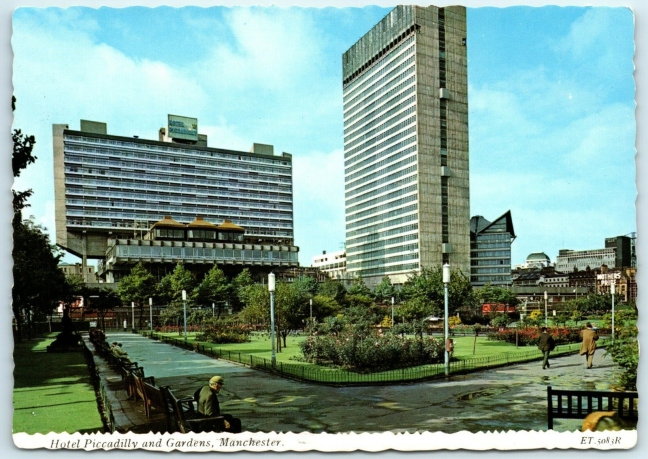 Here we are, right at the heart of Manchester.

Anything worth looking at?

Well not a great deal, it’s 1772 and the Gardens and Plaza, are as yet undreamt of – the area was occupied by water-filled clay pits called the Daub Holes, eventually the pits were replaced by a fine ornamental pond.

In 1755 the Infirmary was built here; on what was then called Lever’s Row, in 1763 the Manchester Royal Lunatic Asylum was added.

There were grander unrealised plans.

Including an aerial asylum.

The Manchester Royal Infirmary moved to its current site on Oxford Road in 1908. The hospital buildings were completely demolished by April 1910 apart from the outpatient department, which continued to deal with minor injuries and dispense medication until the 1930s.

After several years in which the Manchester Corporation tried to decide how to develop the site, it was left and made into the largest open green space in the city centre. The Manchester Public Free Library Reference Department was housed on the site for a number of years before the move to Manchester Central Library.

The sunken garden was a remnant of the hospital’s basement.

During World War II the gardens were home to air raid shelters.

The Gardens became a festival of floral abundance – in folk memory twinned with the Hanging Gardens of Babylon, but with slightly less hanging.

The area has also acted as a public transport hub.

But this simply can’t carry on, keep calm and demand a Plaza!

Drawings are drawn, models are modelled.

Towering cranes tower over the town, deep holes are dug with both skill and alacrity.

A Plaza begins to take shape, take a look.

All we need now are tenants.

Piccadilly Plaza now contains the renovated Mercure Hotel it was formerly known as the Ramada Manchester Piccadilly and Jarvis Piccadilly Hotel; the refurbishment was completed in 2008.

The company was eventually sold at a knock-down price and the new owner did not think the name worth having.

The first broadcast was at 5am on April 2nd 1974, it was undertaken by Roger Day, with his first words to the Manchester audience: “It gives me great pleasure for the very first time to say a good Tuesday morning to you… Hit music for the North West…we are Piccadilly Radio” before spinning Good Vibrations.

It was the first commercial radio station to broadcast in the city, and went on to launch the careers of a host of star DJs, the likes of Gary Davies, Chris Evans, Andy Peebles, Timmy Mallett, Mike Sweeney, Pete Mitchell, James Stannage, Steve Penk and James H Reeve.

And of course my good friend Mr Phil Griffin.

Just around the corner the Portland Bars.

Waiting for a mate who worked at Piccadilly Radio we ventured down the stairs next door to get a drink and because of our clothes/leather jackets we were chucked back up the steps. We should of stood our ground like one of my mates who was told he could stay if he turned his jacket inside out, thinking he wouldnt do it, but he did and had a drink with his red quilted lining on the outside.

Oh and not forgetting the Golden Egg.

Bata Shoes and a Wimpy Bar.

“Food served at the table within ten minutes of ordering and with atomic age efficiency. No cutlery needed or given. Drinks served in a bottle with a straw. Condiments in pre-packaged single serving packets.”

In addition to familiar Wimpy burgers and milkshakes, the British franchise had served ham or sardine rolls called torpedoes and a cold frankfurter with pickled cucumber sandwiches called Freddies.

Even on the greyest days the Plaza was a beacon of Modernity.

Which were to be illuminated by ever changing images, produced by photo electric cells – sadly unrealised.

So goodbye Piccadilly – farewell Leicester Square? – it’s a long, long way to the future, and we’re barely half way there.

While we’re in the vicinity take a quick trip up and down the car park ramp.

Notably the entrance to the Hotel Piccadilly was on the first floor, accessed by non-existent highways in the sky – sweet dreams.