The longest day the least snaps – preoccupied with the avoidance of the main road over to Eastbourne, we took an arduous route over the South Downs Way.

Further preoccupied by and appointment with John Nash at the Towner at One PM.

Firstly however a leisurely ride along the Undercliff – designed by Borough Engineer David Edwards as a public amenity, was begun in 1928 and opened in July 1933.

Sustrans have the habit of heading away from the A roads and onto the backstreets of Britain.

To fill in the gaps on our snap-less journey, here’s my previous trip.

Leaving the coast for the soft rolling Sussex hills, where we encounter the Litlington White Horse.

The Litlington White Horse is a chalk hill figure depicting a horse, situated on Hindover Hill in the South Downs, looking over the River Cuckmere to the west of the village of Litlington and north of East Blatchington in East Sussex.

The current horse was cut in 1924 by John T, Ade, Mr Bovis and Eric Hobbis in a single night and stands at 93 feet long and 65 feet high. A previous horse was cut in either 1838 or 1860 on the same site. Since 1991, the horse has been owned by the National Trust, who regularly clean and maintain the horse along with local volunteers.

Local legend suggests that the horse was originally cut as a memorial to a local girl whose horse bolted when riding along the brow of Hindover Hill, throwing her down the hill which resulted in her death.

However, there is no evidence to suggest this to be true.

Viewing from Terra Firma the lone pursuit of the camo-bucket hatted cyclist.

Who subsequently discovers the heady heights of the Downs.

Which seem to have more in the way of ups than downs.

Though when the gradient eases, graced with the sweetest sweeping green bowls.

We then descend to Jevington Church – St Andrew.

The restored tower is 11th Century

The nave is 12th Century, with a later 13th Century chancel and north aisle.

Most windows are 14th or 15th Century.

Having descended, we are now faced with another lengthy ascent and the prospect of our late arrival in Eastbourne.

Against all odds we are almost on time and permitted entry to the John Nash Exhibition.

The Landscape of Love and Solace.

Ascending with ease in the capacious elevator.

A wonderful show – so much to see, prints and watercolours in superabundance.

Followed by tea and a bun in the smart café.

We hastened to Hastings, pausing briefly to say hello to Pauline, then onward to Rye.

Once again walking the climbs, before dropping down to Winchelsea, where we were met by a relentless easterly headwind.

Our weary legs propelling us ever so slowly through an area of marsh and shingle, softly edged by the sea.

On 15th November 1928 at 6.45am the ‘Mary Stanford’ lifeboat with her crew of 17 was launched to save a stricken vessel. A south-westerly gale with winds in excess of 80 miles per hour was raging in the English Channel. Not one of these brave Rye Harbour men ever returned.

The impact of the disaster on the Rye Harbour community was devastating and deeply affected all who lived there. The disaster was also felt worldwide, and was front page news over the days that followed. The funeral was attended by hundreds including the Latvian Minister. An annual memorial service is held at Rye Harbour church to this day.

The Lifeboat House still stands, but was never used again.

Having cycled along the Solent to Pompey – we set out Brighton bound one sunny Sunday morning in the merry month of May.

Heading for the Hayling Island Ferry.

Determined to make good time as we had an appointment a Pallant House, we pedalled purposefully along the Hayling Billy Line.

We eventually rolled into Chichester, finding our way to the gallery which I had previously only ever dreamt of visiting.

What wonders await at Pallant House?

Inside we found the best of Twentieth Century British Art, displayed in period surroundings.

Suitably satiated we sat headed further east – to Bognor and beyond!

Since 1867 Reynolds has grown from a small shop to the largest furniture store in Sussex, with over 30,000 sq ft on four floors.

The Funeral Service now has three offices in Bognor Regis, Chichester and Littlehampton and the purpose built storage facility in Canada Grove continues to thrive.

We soon found ourselves in Felpham, amongst yet more interesting housing.

We traversed the River Arun at Littlehampton.

Then meshed with the milieu on the prom.

Finding our way back to the coast through the Kingston Gorse Estate – where almost everything is comprehensively prohibited.

Kingston Gorse is a beautiful seaside location close to Goring-by-Sea in West Sussex. In Kingston Gorse, there is a gorgeous housing development with a number of three, four and five bedroom homes.

In 1918 JA Candy, who owned East Kingston Farm, sold the land on which Kingston Gorse now stands to the local builder G Pesket.

In the 1920s he constructed the infrastructure and developed approx. 30 plots including Imray, which he occupied.

The estate was once home to Bud Flanagan who then sold his house to Teddy Knox.

Proceeding towards our overnight digs more than somewhat weary – it’s been a long day.

There are more snaps here taken on my previous trip.

And why is the sink a funny shape?

Any road up we’re off up the road, the sun’s a shining and here we are in Littlehampton.

Looking at a pale blue gas holder, some way off in the middle distance.

Staring up at a fishmonger’s ghost.

Passing by an ultra-squiggly seaside shelter as a runner passes by.

The Long Bench at Littlehampton is thought to be the longest bench in Britain and one of the longest in the world. The wood and stainless steel bench ‘flows’ along the promenade at Littlehampton in West Sussex – curving round lamp posts and obstacles, twisting up into the seafront shelters, dropping down to paths and crossings.

​The bench was opened in July 2010 and can seat over 300 people. It was funded by Arun District Council and CABE’s ‘Sea Change’ capital grants programme for cultural and creative regeneration in seaside resorts. The bench was also supported by a private donation from Gordon Roddick as a tribute to his late wife Anita, the founder of the Body Shop, which first began trading in Littlehampton.

Nothing lifts the spirits quite like a wildflower meadow.

Imagine my surprise having gone around the back – an expressionist concrete spiral stairway.

The phrase deceptively spacious is one that is often overused within the property industry, however it sums up this ground floor flat prospectively. Offering a great alternative to a bungalow and providing spacious and versatile living accommodation, this is an absolute must for your viewing list.

What a delightful Modernist frieze on the side of Marine Point – Worthing!

With lifts to all floors this triple aspect corner apartment is situated on the fifth level and has outstanding panoramic sea views across from Beachy Head to Brighton through to the Isle of Wight. It is also benefits from stunning South Down views to the west and north. The property has been recently refurbished to a high specification and includes features such as: Quick-Step flooring, security fitted double glazed windows, a hallway motion sensor lighting system, extensive storage space and two double bedrooms.

Fox and Sons are delighted to offer For Sale this immaculate seafront penthouse located within the highly desirable Normandy Court situated on the sought after West Parade, Worthing. Upon entry you will notice that the communal areas are kept in good condition throughout.

The finest N in the land!

One of the finest modular pre-cast concrete car parks in the land.

Borough council officers have recommended developing the Grafton car park, with a fresh study recommending that building new homes there is key – saying it is important to help revitalise the town centre and bring in new cutlural and leisure activities.

The car park is currently undergoing essential maintenance to be able to keep it open in the short term but the recommendation is that it should eventually be demolished to make way for the new development.

In the meantime they have painted it a funny colour.

On the concrete Undercliff on my way out of Brighton.

The Seven Sisters in view.

Before you know it you’ve booked into an Eastbourne B&B enjoying the multiple benefits of the complimentary biscuits and a mini-kettle brew.

Followed by a pint in the delightful Dolphin.

A stroll around town.

Returning to the backyard of The Dolphin. 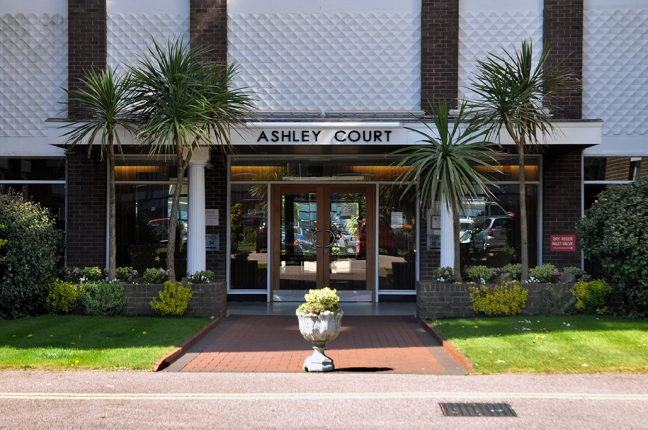 The seashore seems ideally suited to tall well appointed private housing, this is the architecture and landscape of wealth and privilege.

Built and maintained in the finest sixties and seventies Modernist style and fashion, affording panoramic visits across the Hove Lawns to the sea, and the soft rolling hinterland of the Downs. 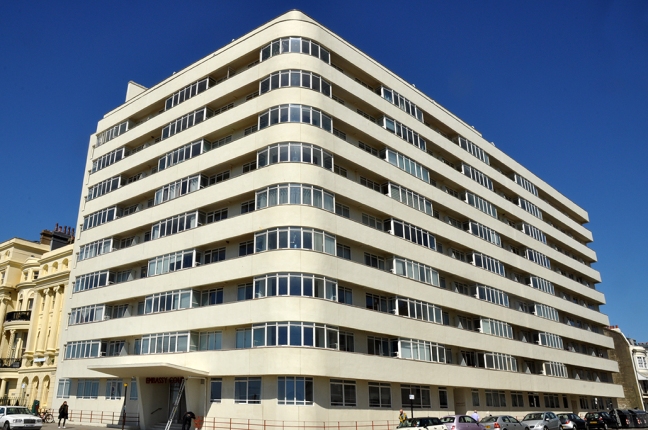 Embassy Court has always had a very special place in my heart.

Forty years ago as a young art student attending nearby Portsmouth Polytechnic, we were taken by Maurice Denis in a minibus to visit the modernist buildings in our locale, this was my first love.

Two days ago I returned to Brighton, sprinting spryly along the prom to meet an old friend.

We were ever so pleased to see each other after all these years, I walked around admiringly and smiled.

Embassy Court is an 11 storey block of flats situated on the Brighton seafront on the corner of Western Street and the Kings Road. It was designed by the architect Wells Coates and completed in 1935.

It is amongst of the most outstanding examples of pre-war Modernism in the UK, it has a grade II* listed status and remains a major Brighton landmark. This beautiful, elegantly proportioned block contains 72 flats, with awe-inspiring sea views, is considered one of the coolest places to live in Britain.

Restored in 2005 after a long period of decline, Embassy Court is now owned by a limited company, Bluestorm Ltd., born from a Leaseholders Association which obtained the freehold of the  building in 1998.