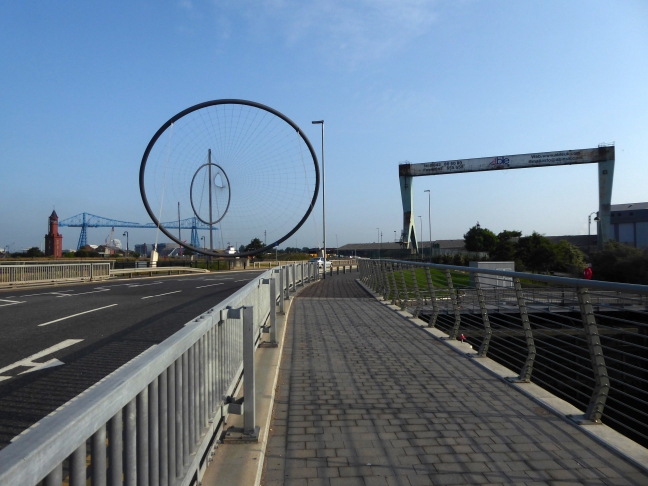 An early start on another sunny day, cycling along long straight roads out of town, towards Middlesborough.

Having previously visited Hull and Scarborough and all points in between.

The Albion club in South Bank has stood empty for the last three years.

Now local lad Mark Trainor has the keys – and says opening the doors to the club his own family frequented for years will be a dream come true.

He’s planning to cater for everyone, he says, and it won’t just be all about drinking.

Parents will be able to call in for a coffee after dropping the kids at school, there will be pool nights and Mark’s personal favourite – Pie Day Fridays.

The £2.7m Temenos structure has taken four months to piece together on the banks of the River Tees near Middlesbrough’s Transporter Bridge.

Thousands of metres of steel wire have been woven between the two steel rings to create the 164ft high and 360ft long sculpture.

It was created by artist Anish Kapoor and structural designer Cecil Balmond.

Temenos is a Greek word meaning land cut off and assigned as a sanctuary or holy area.

Following a 1907 Act of Parliament the bridge was built at a cost of £68,026 6s 8d  by Sir William Arrol & Co. of Glasgow between 1910 and 1911 to replace the Hugh Bell and Erimus steam ferry services. A transporter bridge was chosen because Parliament ruled that the new scheme of crossing the river had to avoid affecting the river navigation.

The opening ceremony on 17 October 1911 was performed by Prince Arthur of Connaught, at its opening the bridge was painted red.

In 1974, the comedy actor Terry Scott, travelling between his hotel in Middlesbrough and a performance at the Billingham Forum, mistook the bridge for a regular toll crossing and drove his Jaguar off the end of the roadway, landing in the safety netting beneath.

The cycle track followed the river, which sports a fine array of industrial architecture.

Tees Newport Bridge designed by Mott, Hay and Anderson and built by local company Dorman Long who have also been responsible for such structures as the Tyne Bridge and Sydney Harbour Bridge, it was the first large vertical-lift bridge in Britain.

Crossing the river and heading for Hartlepool.

I was delighted to be drawn toward Dawson House here in Billingham.

A prefabricated polygonal structure of the 1970s, with laminated timber frame. The seating came from Pugin & Pugin’s church at Port Clarence.

I convinced myself that this building on Station Road Seaton Carew was a former pub, I discovered following consultation with the local studies offices, that it was in fact a former children’s home destined to become a doctors.

I found myself looking back across the estuary to Redcar.

Where the bingo was closed and the circus had left town.

Every Englishman’s home is a bouncy castle.

A large post-war church built to serve a housing estate, economically built and with a functional interior. The campanile is a local landmark.

The parish of St John Vianney was created in 1959 to serve the growing West View Estate, on the north side of Hartlepool. The church was opened by Bishop Cunningham on 4 April 1961. The presbytery was built at the same time.

I found myself on yet another former railway line.

The Cycleway was once a railway line designed by George Stephenson to take coal from the Durham coal fields to the docks in Hartlepool, where the coal was then distributed throughout the world.

The landscape opened up to coal scarred scrub, I lost the path and found a church, which imposed itself upon the hillside.

Seeking assistance from a passing cyclist I negotiated a safe passage to Sunderland.

The Sunderland Synagogue is a former synagogue building in Sunderland, England. The synagogue, on Ryhope Road, was designed by architect Marcus Kenneth Glass and completed in 1928. It is the last surviving synagogue to be designed by Glass.

The synagogue was listed as a Grade II historic structure in 1999.

I crossed the Queen Alexandra Bridge

The steel truss bridge was designed by Charles A Harrison – a nephew of Robert Stephenson’s assistant.

It was built by Sir William Arrol between 1907 and 1909 and officially opened by The Earl of Durham, on behalf of Queen Alexandra on 10 June 1909.

I took a right and arrived in Roker, where I saw these well tanned and tattooed cyclists taking a rest.

Pressed on, largely alongside the coast to South Shields.

Tyne Cyclist and Pedestrian Tunnel was Britain’s first purpose-built cycling tunnel. It runs under the River Tyne between Howdon and Jarrow, and was opened in 1951, heralded as a contribution to the Festival of Britain.

I cycled the banks of the Tyne, fetching up at the Quayside with a fine view of the Baltic.

Washed and suitably brushed up I hastened to the Bridge Tavern – to take a glass or two.