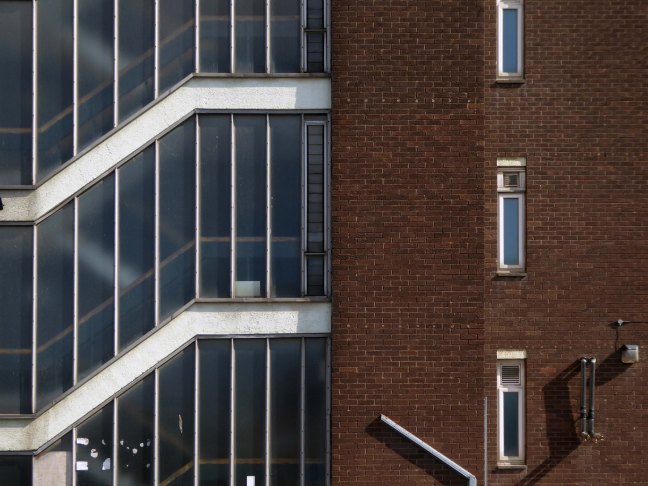 We begin on the Crescent – taking in the former AUEW Building.

It is currently unoccupied.

The University’s Masterplan is shifting emphasis to the Peel Park and Media City sites.

The original master plan would have swept away the Victorian Technical Institute and Salford Art Gallery.

Across the road are the Maxwell Buildings.

They were built between 1959 and 1960 to a design by the architect C H Simmons of the Lancashire County Architects Department.

The interior decorative order of Sixties’ institutions was integral to the architectural design, sadly this is no longer so.

Which may be the subject of ambitious redevelopment.

Take a turn around the corner to the Cockcroft Building.

To the left is the Clifford Whitworth Library – this is the original architectural impression – signed Peter Sainsbury.

The original fascia was tile clad.

Yet again the original interior was integral too the architectural scheme and period.

It was designed by WF Johnson and Partners of Leamington Spa, as a lecture theatre block and gallery. It sits with its long axis running parallel to the railway behind. The series of grey volumes, occasionally punctuated by colourful floods of red and green trailing ivy, hang together in a less than convincing composition. The orientation and access to the building seem confused and detached from any cohesive relationship to the rest of the campus, but there is something perversely attractive about the right essay in the wrong language. The reinforced concrete building contained five lecture theatres, communal spaces, an art gallery, AV support areas and basement plant rooms. Following a major refurbishment in 2012, several additions were made to the exterior and its total concrete presence somewhat diminished. It still houses lecture theatres and a number of other learning and social spaces.

A ways down the road the former Salford Technical College.

Now the part of the University of Salford, this grouping is probably the most significant work by Halliday Meecham during this period. The blocks wrap to almost enclose a courtyard and they step up in height towards the rear of the site. To the front is a lecture theatre block in dark brick. The multi-storey elements are straightforward in their construction and appearance and have had their glazing replaced. Perhaps the richest elements here are the three totemic structures by artist William Mitchell, which were listed at Grade II in 2011. Mitchell was actively engaged with the experiments of the Cement and Concrete Associations during the 1960s and produced a wide variety of works for public and private clients; other works regionally include the majority of the external art and friezes at Liverpool Metropolitan Cathedral and the Humanities Building at Manchester University. These textured concrete monoliths appear to have an abstract representation of Mayan patterns and carry applied mosaic. They were made on site using polyurethane moulds. There is another Mitchell work hidden behind plasterboard in the inside of the building.

Subsequently assimilated into the University.

Just down the way The Woolpack is no more.

The Ellor Street dream begins to come true – complete with interviews with residents of the newly constructed Walter Greenwood, Eddie Colman and John Lester Courts all which towered some 120 feet above the Hanky Park skyline.

These particular blocks of flats were of special significance because their completion was the end of the first stage of the Ellor Street redevelopment scheme which was to provide 3,000 new homes, the £10 million pound Salford Shopping Precinct and a new civic centre – which never got built – making this A Salford of the Space Age.

The tower blocks are now clad and the site a construction base for cladders.

Full details of Salford’s complex and extensive redevelopment can be found here at Tower Block.

Walter Greenwood Court was demolished in 2000/2001, whilst Eddie Colman and John Lester Court are now student accomodation for the nearby Salford University.

The architectural core of the site has been retained, including the 23 storey Briar Court residential tower.

Tucked in behind is Mother of God and St James RC Church.

Clearances took place from the middle of the twentieth century and new high-rise housing blocks were built, as well as a shopping centre.

There was a Catholic presence in the area from 1854, when schools were built. What was described in The Tablet as a beautiful church, an Early English Gothic design by M. Tijou – presumably Herbert Tijou, architect of the chapel to Loreto College, Manchester, was opened by Cardinal Manning, Archbishop of Westminster in 1875.

One hundred years later this church was demolished and replaced by the present building.

The architects were Desmond Williams & Associates, the design bearing some similarity to their St Sebastian, Salford. In 2010 the church of All Souls, Weaste, was closed, and the marble sanctuary furnishings brought to the church.

All orientations given are liturgical. The church is steel framed with brick walls and a monopitch roof (originally covered with copper, now with felt).  Bold brick forms create a presence, and the design is somewhat defensive, with few windows. The building is entered from a lower porch which forms a narthex. The slope of the roof and the stepped clerestory lighting create a striking impression inside, and full-height windows towards the east end incorporate stained glass figures said to have originated in the previous church. Marble sanctuary furnishings are presumably those from the church in Weaste and appear to be of later twentieth century date, while the font is of traditional type with a clustered stem and may have come from the earlier church.

This is an area which has seen a succession of clearances, redevelopment and shifts in demographics during a relatively short and intense period of change.

That process of change continues to hastily unfold.