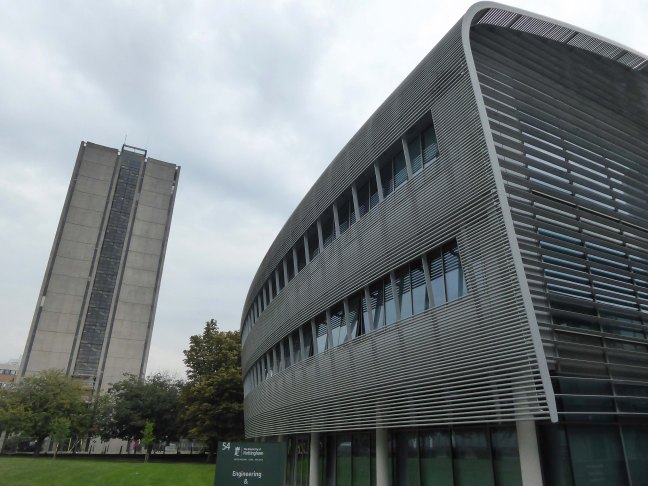 The Main Campus based on Jesse Boot’s Highfield parkland incorporating Lenton House and Lenton Hall. Boot along with his architect Percy Morley Holder developed a building scheme in 1921, achieving university status in 1948.

Further additions to the rear 2013

The New Theatre was established in 1969, and was originally housed in the Archaeology and Classics building of the University of Nottingham. In 2001 an extended foyer was added to the building, following a donation from an alumnus of the university.

The summer of 2012 saw an extensive redevelopment of the building housing the New Theatre. The former Archaeology and Classics building was demolished from the site; leaving the New Theatre as a freestanding building. Parts of the old building were retained and repurposed as new rehearsal rooms, and a studio space; as well as a significant remodelling of the dressing room, and extending the foyer.

The collection of buildings in University Park Campus, colloquially known as Science City, was first masterplanned by Basil Spence in 1959. His vision was largely realised by Renton Howard Wood Associates during the 1960s. Since then, numerous additions and alterations have been made to suit the ever increasing student numbers and the changing needs of the University.

A view over the Science Buildings by Basil Spence 1955 and partner Andrew Renton 1961 onward.

The University of Nottingham needed to double the size of its existing academic library to cater for an expansion in serious scientific study. Hopkins Architects faced the difficult task of doubling the size of a rather unremarkable 1960’s building – designed by Basil Spence, on a tight sloping site.

Jubilee Campus is a modern purpose-built campus which now extends to 65 acres and is located only one mile from University Park. The initial phase was opened by Her Majesty the Queen in 1999. The state-of-the-art facilities now include:

Central to the development of the site has been the setting of high BREEAM Standards – an holistic approach to achieve ESG, health, and net zero goals. ​It is owned by BRE – a profit-for-purpose organisation with over 100 years of building science and research background.

Built on the former site of the immense Number 3 Raleigh Bicycle Factory – which was opened by Field Marshal Lord Montgomery in 1957.

At its peak in the 1950s, Raleigh employed 7000 people on a 40 acre site that covered most of Lenton Boulevard, Triumph Road and Orston Drive.

In May 1999, Raleigh announced that it was to cease volume production of frames in the UK. The frame welding robots, installed in 1996, were auctioned off in December 1999.

Enjoying a prime location on the University of Nottingham’s Jubilee Campus, the building provides a number of multidisciplinary and specifically designed laboratory spaces, as well as high quality single and multiple occupancy offices, technical support bases and breakout spaces.

Set within 65 acres of lakeside grounds, close to Nottingham city centre, The Jubilee hotel & conferences offers an innovative setting for events, along with all the comforts of a modern hotel.

If you are looking for sustainable venue hire, look no further. With a range of meetings spaces, breakout areas and bedrooms; The Jubilee is perfect for event and conferences organisers looking for a light, airy and relaxing setting.

Designed to minimise the impact on the environment of its construction and operation. The design of the building is made up of modules manufactured off-site. The building support pillars and trusses are made from a combination of German spruce, Austrian Spruce, and American red cedar.

The designers used computational fluid dynamics to design the curved roof. This enables ventilation of the building by taking advantage of the prevailing wind. One of the laboratories is also ventilated in this way, to determine the viability of doing so elsewhere. The building also features a green roof, and solar panels that cover 45 per cent of the roof area and provide up to 230.9 kW. The four towers on the roof hide the building’s plant equipment. Additionally, a 125-kilowatt biofuel combined heat and power system was built on-site, providing the majority of heat needed for the buildings.

At first glance the centre appears to be a hi-tech structure that would not look out of place in a sci-fi movie, with a complex array of metal fins forming a metallic bronze-coloured circular envelope that seems to float around a central core.

Keep looking though and some of the design cues are clearly industrial – the metallic external envelope echoing the form of some finely machined, mechanical component or even the patterned tread of a tyre.

Aspire is a 60-metre tall, red and orange steel sculpture by Ken Shuttleworth of MAKE, and was, until overtaken by Anish Kapoor’s Orbit, the tallest free standing public work of art in the United Kingdom. It is taller than  Nelson’s Column, the Angel of the North, and the Statue of Liberty

The name Aspire was chosen after a competition to name the sculpture, which was open to staff and students at the university.

A showcase £6.5m research centre, which brings together world-class experts in energy research, has chosen ALUCOBOND® A2 from 3A Composites GmbH, finished in Sakura 917 from its spectra colour series for its cladding.

Institute of Mental Health by BENOY 2012

The House for a Gordian Knot by Ekkehard Altenburger

The library was named after the philanthropists Sir Harry and Lady Djanogly who gave a significant contribution towards the cost of its construction. Sir Harry Djanogly is the father of Jonathan Djanogly, who became MP for Huntingdon in 2001.

Mouchel’s involvement with the iron industry, and his ties with France, brought him into close proximity with the French engineer François Hennebique (1842-1921), who had been a contractor in Brussels. A self-educated builder, Hennebique had patented an idea of strengthening concrete using iron and steel bars – a forerunner to the widespread modern reinforced-concrete method used in construction today.

Sadly – returning in September the last building had been recently demolished. 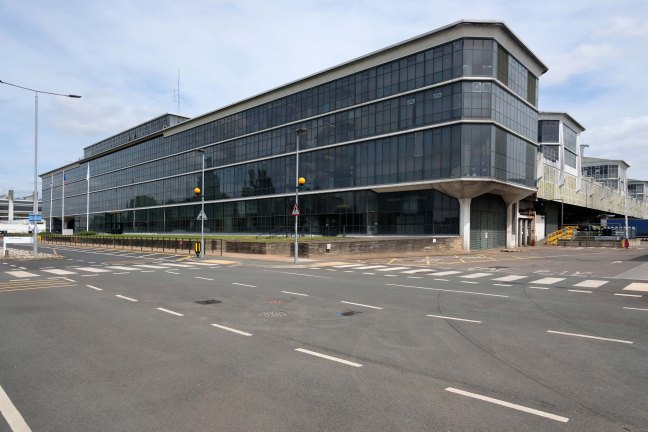 I boarded the 49 bus to Boots.

I alighted from the 49 bus at Boots and proceeded to take a look around.

The pharmaceutical factory for the Boots Company was built in the 1930s and was designed by Sir E Owen Williams. It uses reinforced concrete as an external frame. The strength of the frame allowed the design to incorporate large areas of glass.

Much of the site is now listed.

Here is the company’s official history

At this point I was asked to leave the site – having arrived on a public service bus, I was unaware that this was a restricted area.

This was explained to me by the ever so helpful security staff.

I made my excuses and left.