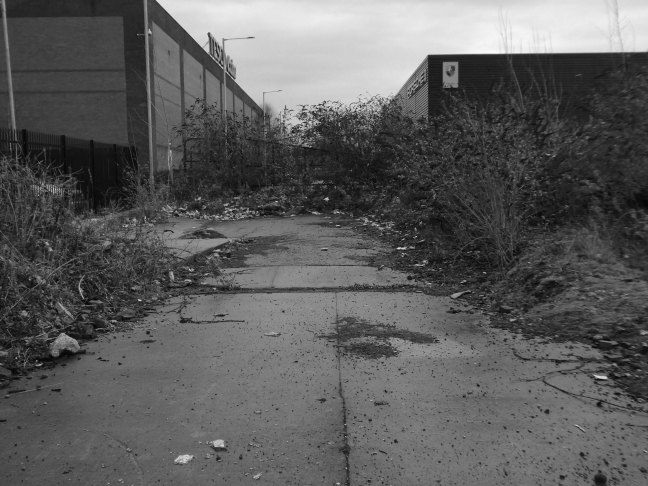 We once were lost, but are we saved?

A remnant from a discarded photographic album locates us in Cornwall.

The Ordnance Survey places us at the heart of the Industrial Revolution.

Now we are in the shadow of Tesco Extra and a recently opened Porsche dealership.

As of 2022, the supermarket chain had a brand value of roughly 9.91 billion US dollars.

Porsche Automobile Holding SE net worth as of January 2023 is 16.51 US dollars.

By the side of the River Tame and the M60 Motorway

The 19th-century industrial concentrations in the above-named urban areas resulted in the Tame being a much polluted waterway. As well as industrial pollution from the dyes and bleaches used in textile mills, effluent from specialised paper-making cigarette papers, engineering effluents, including base metal washings from battery manufacture, phenols from the huge coal-gas plant in Denton, rain-wash from roads and abandoned coal spoil heaps there was also the sewage effluent from the surrounding population. Up to two-thirds of the river’s flow at its confluence with the Goyt had passed through a sewage works. The anti-pollution efforts of the last thirty years of the 20th century have resulted in positive fauna distributions.

There is a plot of land to the left of Porsche which remains undeveloped, I often walk around this area, what would have once been for myself and others the place of childhood high jinx.

Now it is the domain of the fly-tipper, the home of the homeless, a war zone for a species which has declared war upon itself.

A desert of detritus, interpolated with tangles of brambles, seas of teasels and the ubiquitous buddleia.

This is the unofficial showroom for the unofficial Anthropocene Epoch – always crashing in a different car, during increasingly unseasonal weather, the superabundance of abundance.

It seems that the sun may set on us, before the sun finally sets.

Let’s take a peep at Portwood.

Vehicle use affects our whole quality of local life. Traffic can be dangerous and intimidating, dividing communities and making street life unpleasant, whilst air pollution and traffic noise can make urban living uncomfortable.

The impacts of mass consumption are: Misuse of land and resources, exporting pollution and waste from rich countries to poor countries, obesity due to excessive consumption, a cycle of waste, disparities and poverty.

We have previously taken a look at Portwood as was – let’s take a giant leap forward to today.

The industry to the east has gone west – no more bees and alligators, instead there’s Tesco and Porsche.

Why make when you can buy?

I though, have always been fascinated by the rough ground that now seems so left behind.

Where once I found a weathered book of lost photographs.

This is a scarred and neglected landscape, even the developer’s sign has given up the ghost.

There are brambles, buddleia, rough grass and teasels amongst the rubble.

The remnants of roads, kerbed and tarred, strewn with hastily dumped detritus.

Enter beneath the M60, where the Tame and Goyt conjoin to become the Mersey, a dimly lit passage home to the itinerant aerosol artistes.

All that remains of the long gone mills – the concrete base.

Detritus tipped and strewn, amongst the moss.

The remnants of roads going nowhere.

This horror will grow mild, this darkness light.