The city, however, does not tell its past, but contains it like the lines of a hand, written in the corners of the streets, the gratings of the windows, the banisters of the steps, the antennae of the lightning rods, the poles of the flags, every segment marked in turn with scratches, indentations, scrolls.

Paul Dobraszczyk posted this Shirley Baker photograph, he was puzzled by its exact location, it puzzled me too.

For nearly all that is depicted here, is now no longer extant, save one hopes, for the group of playmates.

All that is solid melts into air, all that is holy is profaned, and man is at last compelled to face with sober senses his real conditions of life, and his relations with his kind.

Manifesto of the Communist Party

Shirley Baker was a renowned documentary photographer, who worked extensively in Greater Manchester.

I love the immediacy of unposed, spontaneous photographs and the ability of the camera to capture the serious, the funny, the sublime and the ridiculous. Despite the many wonderful pictures of the great and famous, I feel that less formal, quotidian images can often convey more of the life and spirit of the time.

I am grateful to Stephen Bann who has identified the monument as the Bann Family vault:

Stephen Bann and his younger brother – many thanks for the text and photograph Stephen.

Her photograph was taken in Stockport 1967 – I first assumed it was taken from St Mary’s Church, looking toward the former power station.

Using the Stockport Image Archive, I found the possible site, in this photograph of Tiviot Dale Station.

There on the eastern edge of Lancashire Hill – Hanover Chapel.

An area of intense activity, road, rail, housing and infrastructure.

Hanover Chapel closed 1962 – though we may assume from Shirley Baker’s photograph, that following its demolition the graveyard remained intact but untended.

The chapel is thought be seen in the 1954 film Hobson’s Choice, directed by David Lean and starring John Mills, here awaiting his bride to be – the parish church of St Mary’s on the skyline.

Though closer examination reveals that this is not Hanover Chapel – where did those pillars come from?

Where are we, in a labyrinth of invention with a superimposed Stockport backdrop?

My thanks to Robert Collister for these observations.

Improbably out of time, the cooling towers are yet to be built, or blown up.

The film’s screenplay was the work of Shelagh Delaney, whose previous work A Taste of Honey also used local locations.

Where Finney has pulled up, feeling proper poorly.

Where once there was a continuous run from the chapel to the town centre, the motorway has since intervened.

The Tiviot Dale pub on the right is no more, closed in 2013.

We had people from all parts of the country turn up on our final day, some of them brought their children who wanted to come because they remember the pub so fondly from their childhood. It was really humbling to see that our pub had touched so many lives.

The King’s Head/Full Shilling on the left closed in 2015, though still standing.

I remember this pub as a Boddingtons house in the 1970’s. Excellent bitter served by handpump from small vault at the front and a larger “best room” behind, both very narrow given the width of the pub. The landlord employed an unusual method of ensuring everyone got a full pint; a half pint glass of beer was kept between the pumps and your pint was topped up from the half which was constantly replenished to keep it fresh. I have not seen this practice in any other pub.

When’s the next tram due?

At the adjacent gas works – gas holder number three was dismantled in 1988, gas holders one and two were removed in 2019.

The nature of infrastructure, housing and industry has changed radically.

They themselves clad and revamped.

The Nicholson’s Arms built to serve the flats closed and currently empty, signs say to let – replaced an earlier pub, sited on the corner of long gone Nicholson Street.

Today from the road there’s simply no trace of the site’s past purpose.

At the centre of what is now a compact civic grassed area – a trough.

The dense stand of trees is impenetrable – no longer a view of the non existent power station and beyond.

And they that shall be of thee shall build the old waste places: thou shalt raise up the foundations of many generations; and thou shalt be called, the repairer of the breach, the restorer of paths to dwell in.

As a footnote I did meet brothers Stephen, Derek and Peter who appeared in this Shirley Baker photograph 55 years ago – she promised them an ice cream each – they never ever received an ice cream.

They are seen in Sunnyside Street Ordsall – long since demolished.

A commemorative plaque from the Chapel still exists, sited now on the wall of Wycliffe Congregational Church Georges Road Stockport.

A Moebius Band of motorway formerly known as the M63 wraps and warps itself around the city, ever so conveniently linking the traffic of Greater Manchester with itself.

Ever so conveniently it passes through Stockport – only moments from my home.

Before the white man came.

The view from Princes Street along Hatton Street – towards Heaton Norris Rec.

A boon to the modern day motorist, though happily the modern day pedestrian is also catered for in the form of the Hatton Street Footbridge – linking Great Egerton Street below, with Heaton Norris Recreation ground above.

For the past two years the footbridge has been inconveniently closed, during the development of the Redrock Leisure Facility, built on the site of the former car park, in the foreground of the image above. Thus prohibiting the passage from the Post Modern world of the big brash entertainment box, to the leafy cobbled street beyond.

The Hatton Street footbridge has two spans of in-situ u-section deck, is at ground level on the north side, but is reached by steps or ramp from Great Egerton Street on the south.

I’m ever so pleased that access has been reinstated, from me it is both fully functional yet imbued with an elegant concrete sculptural grace, worthy of Niemeyer or Lasdun.

So take a walk on the slightly higher side, either way you win. 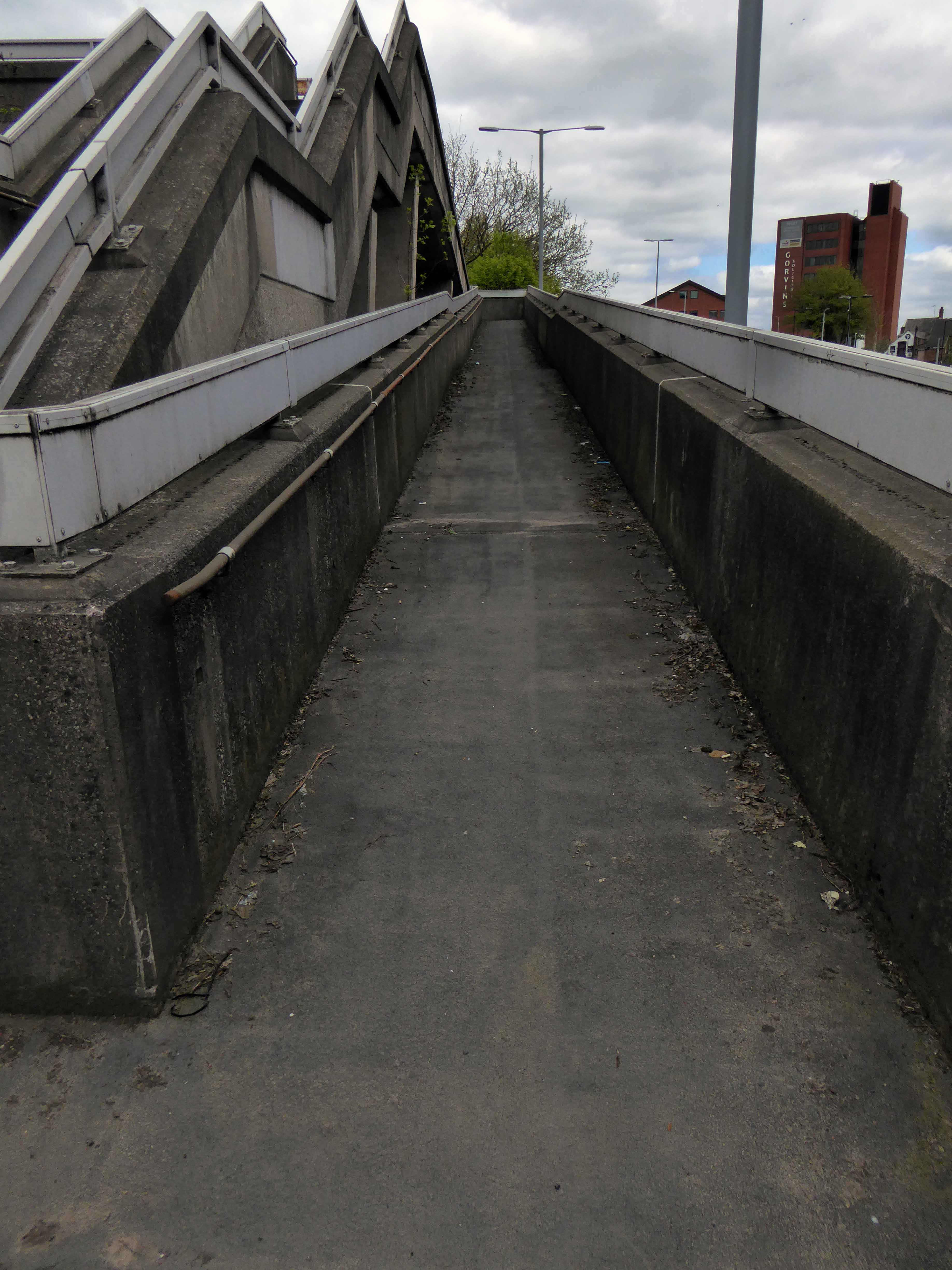 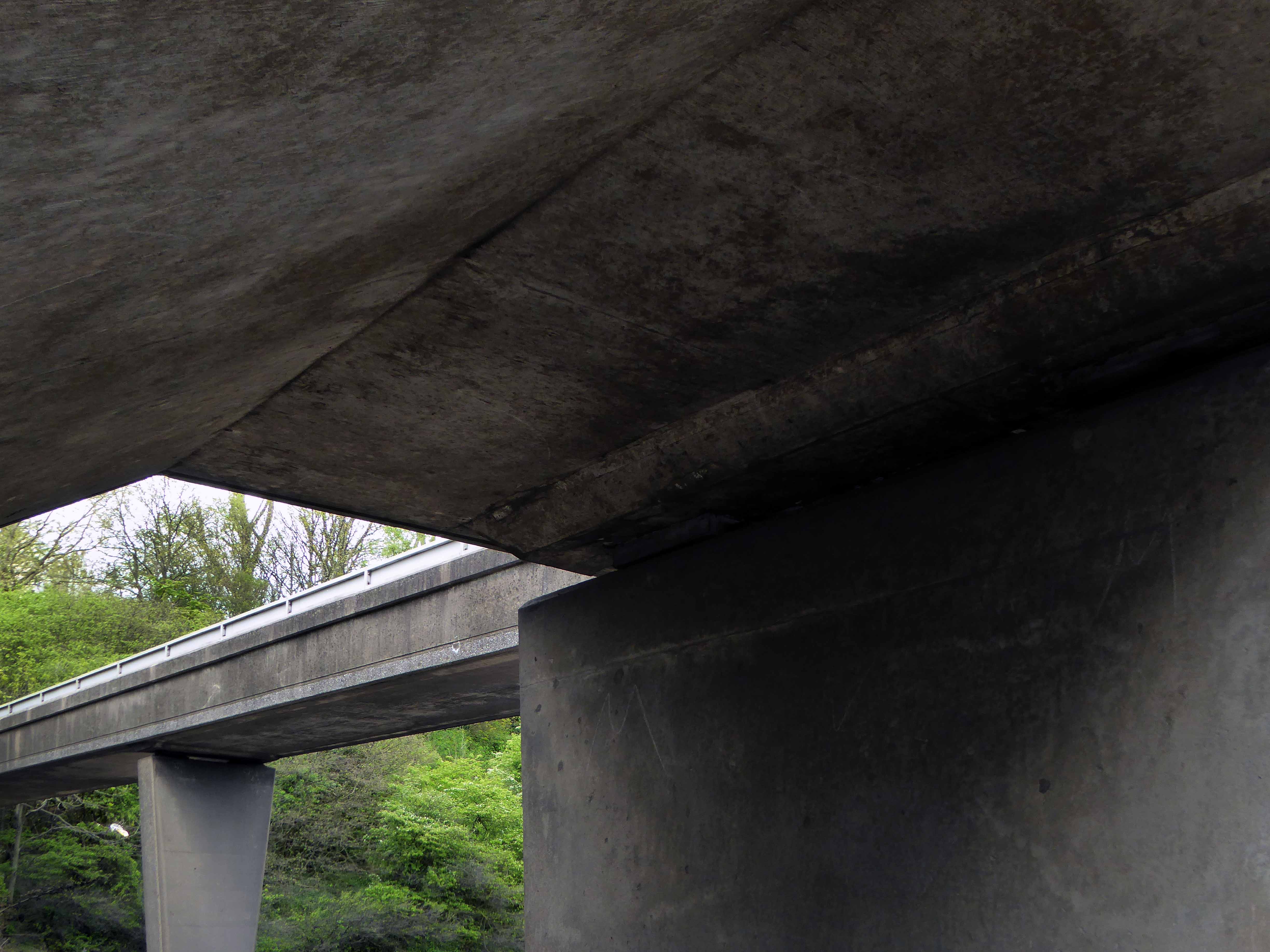 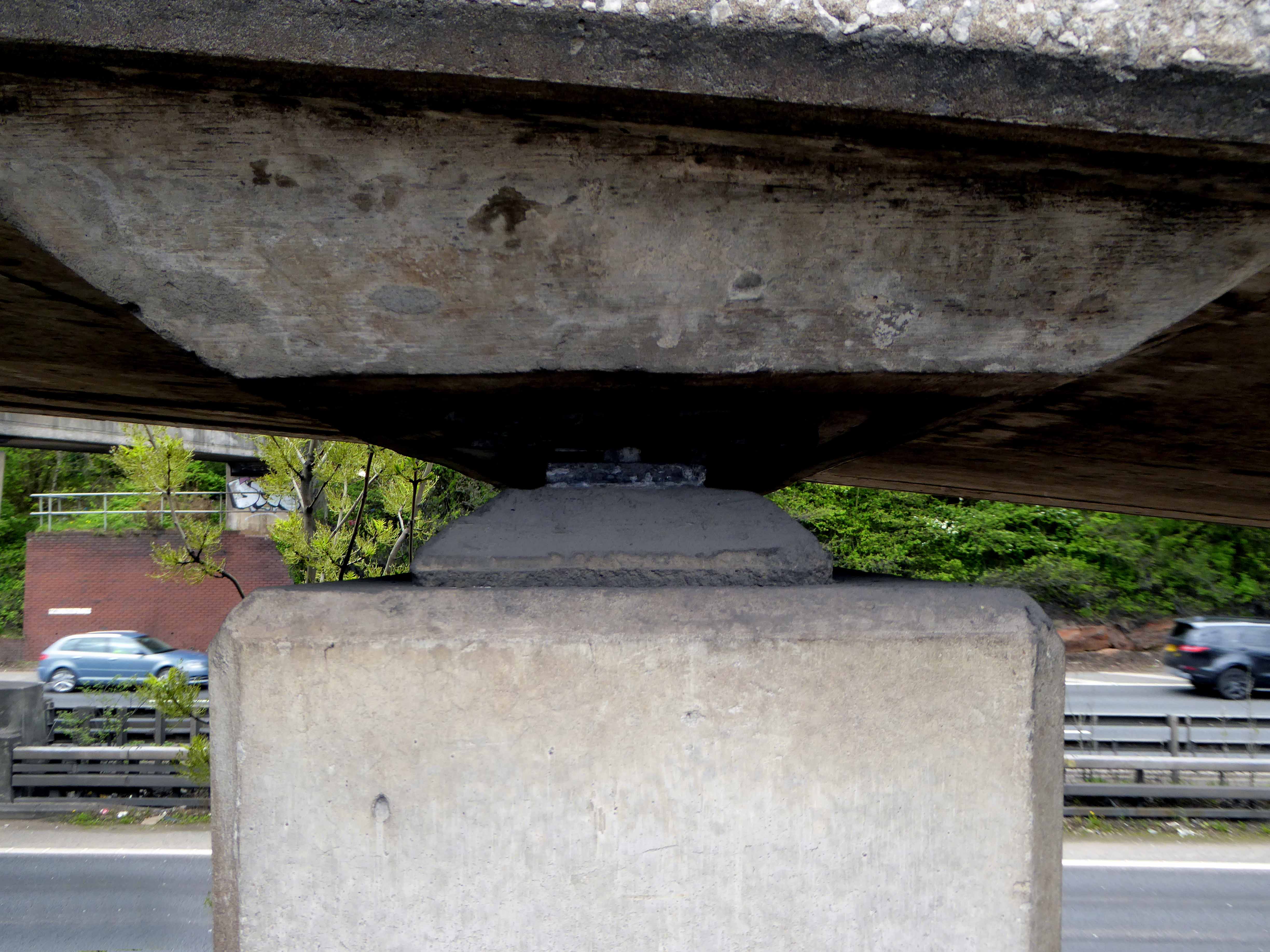 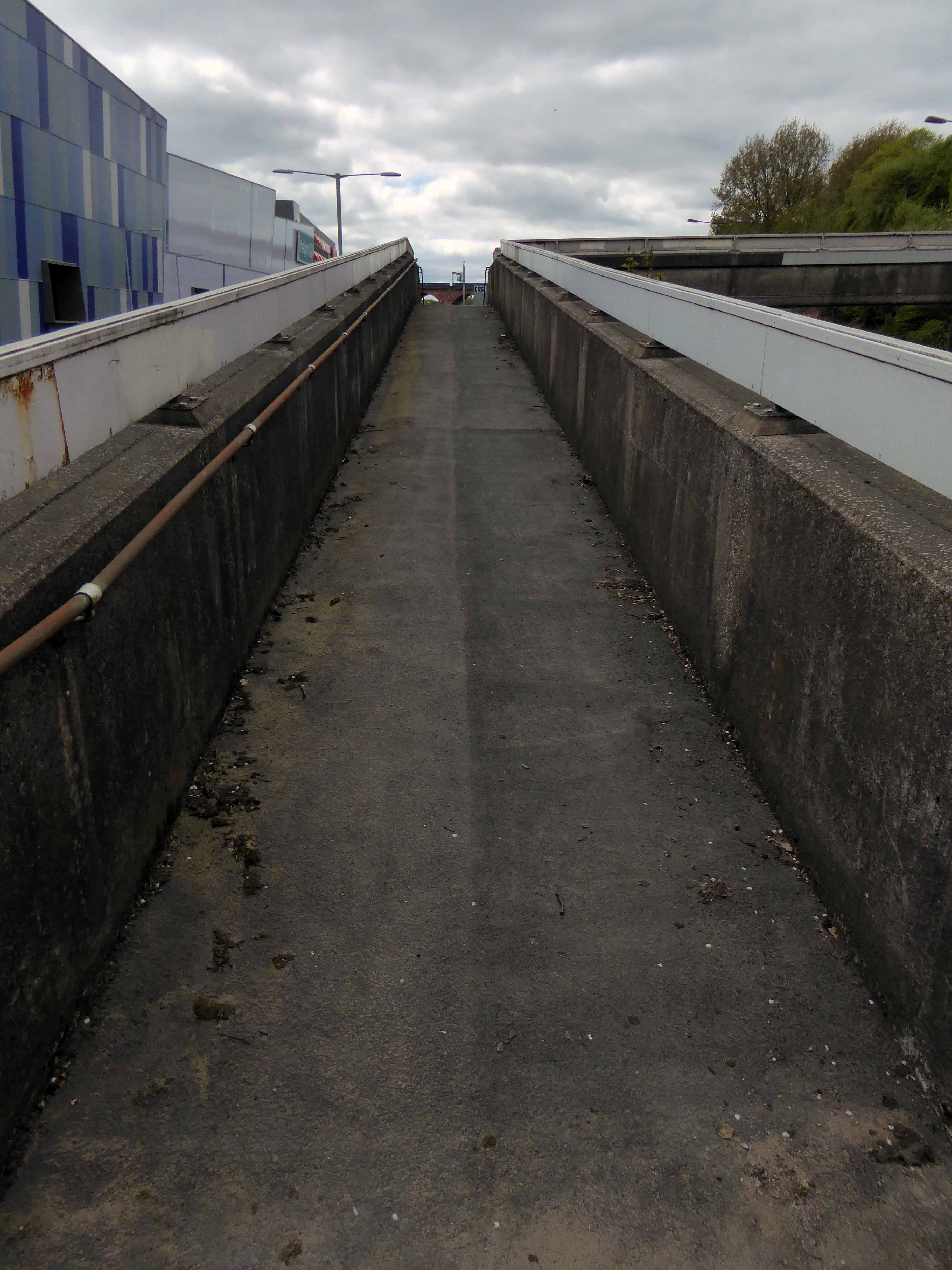 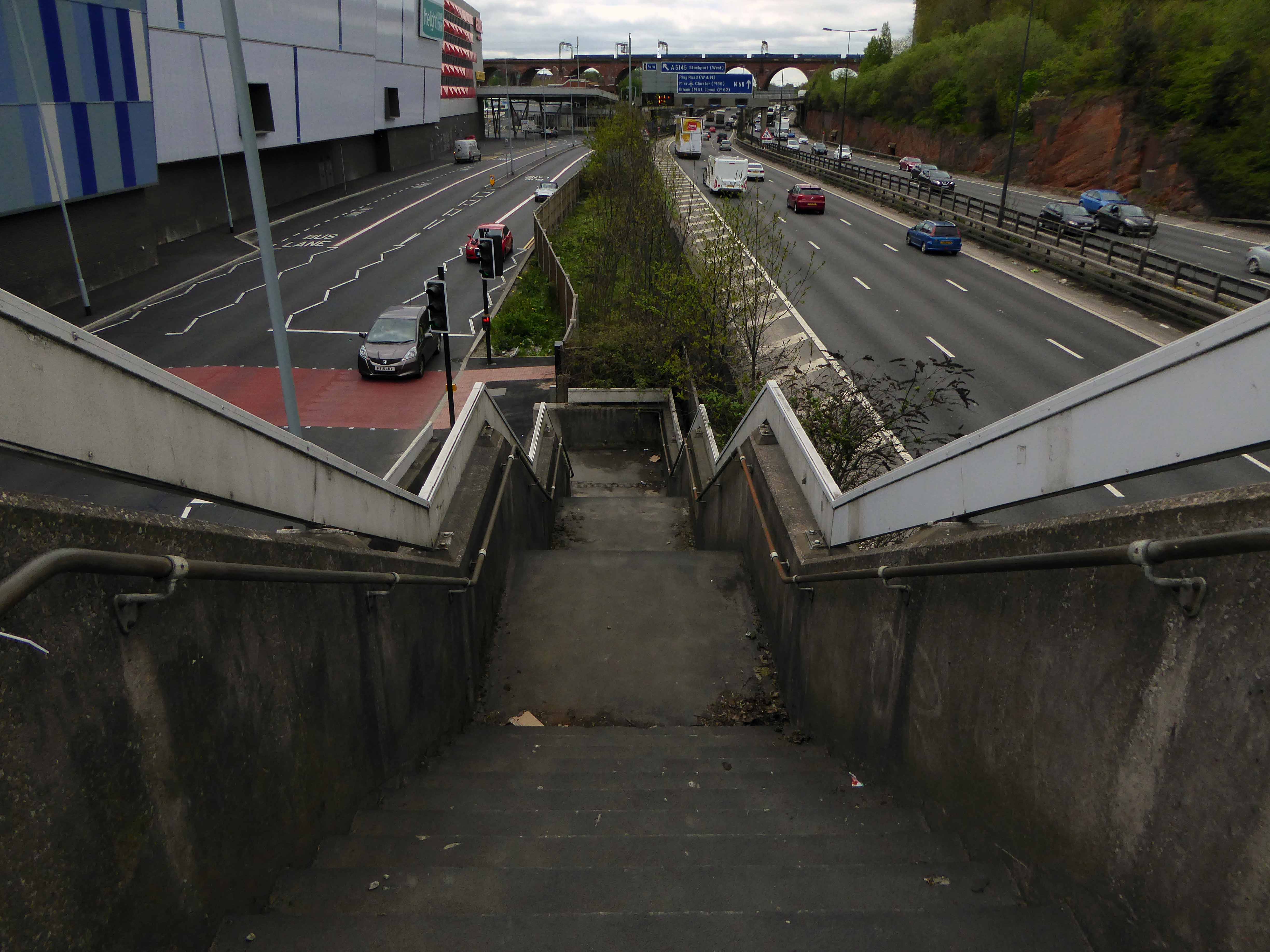 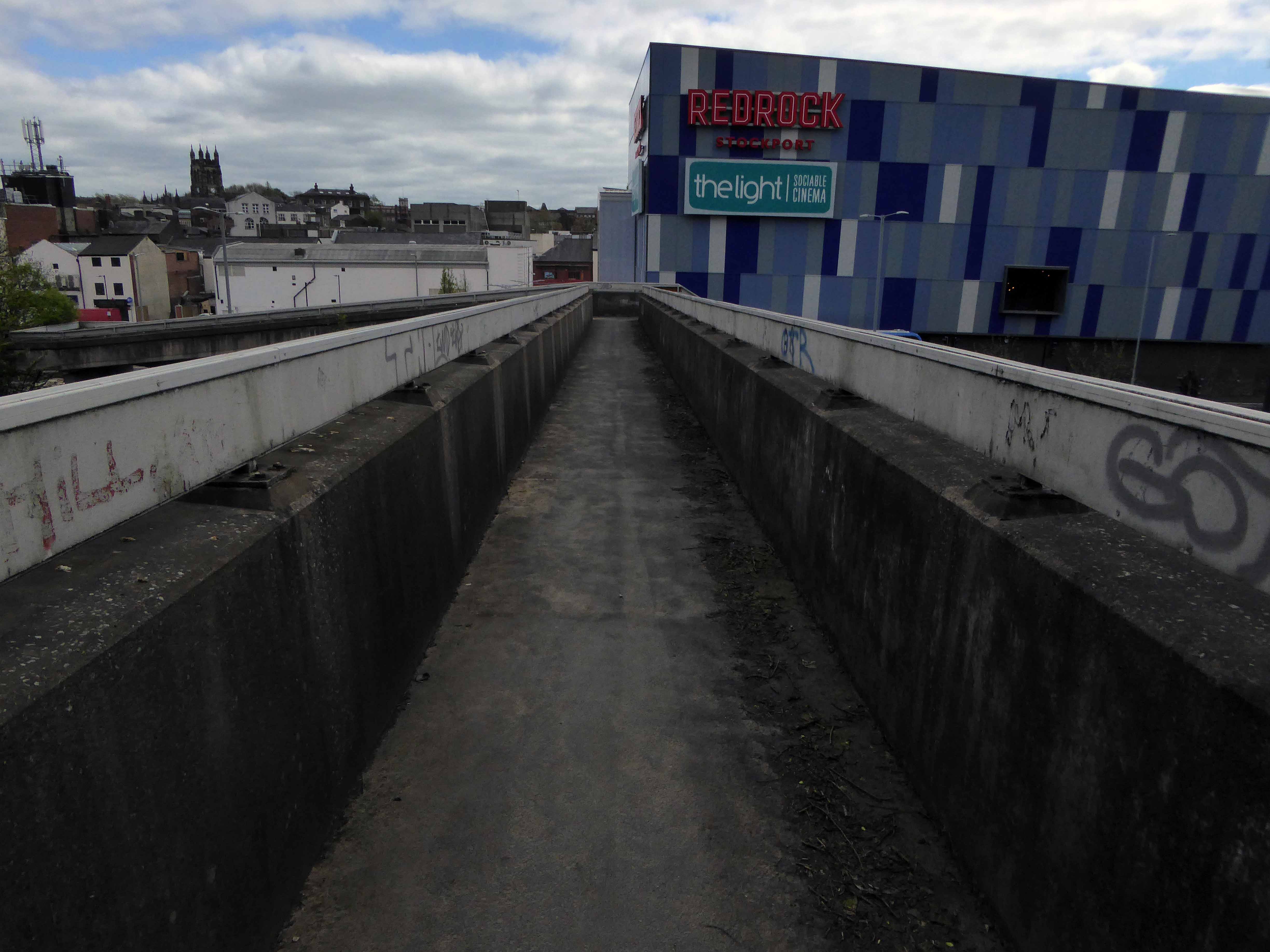 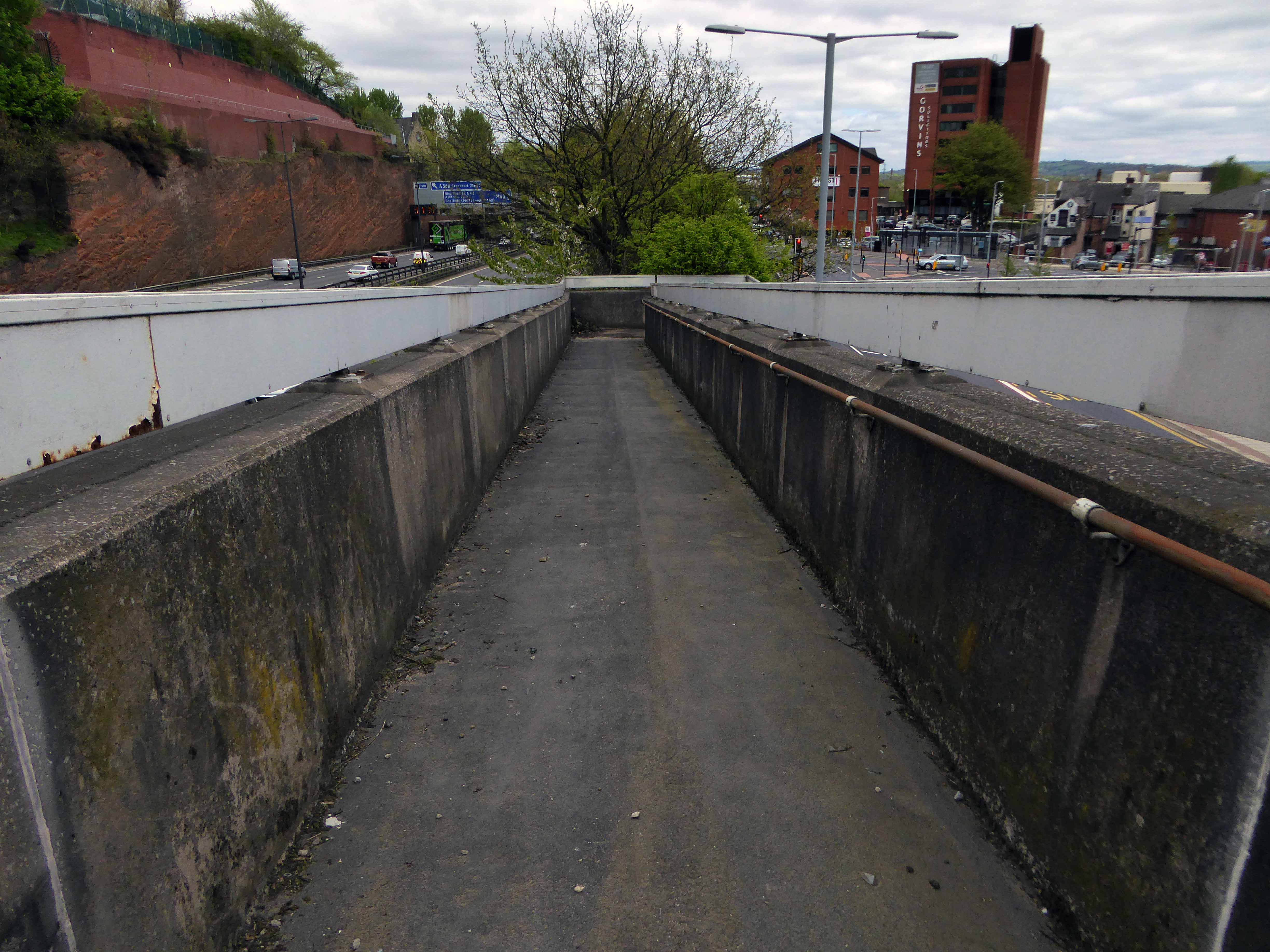 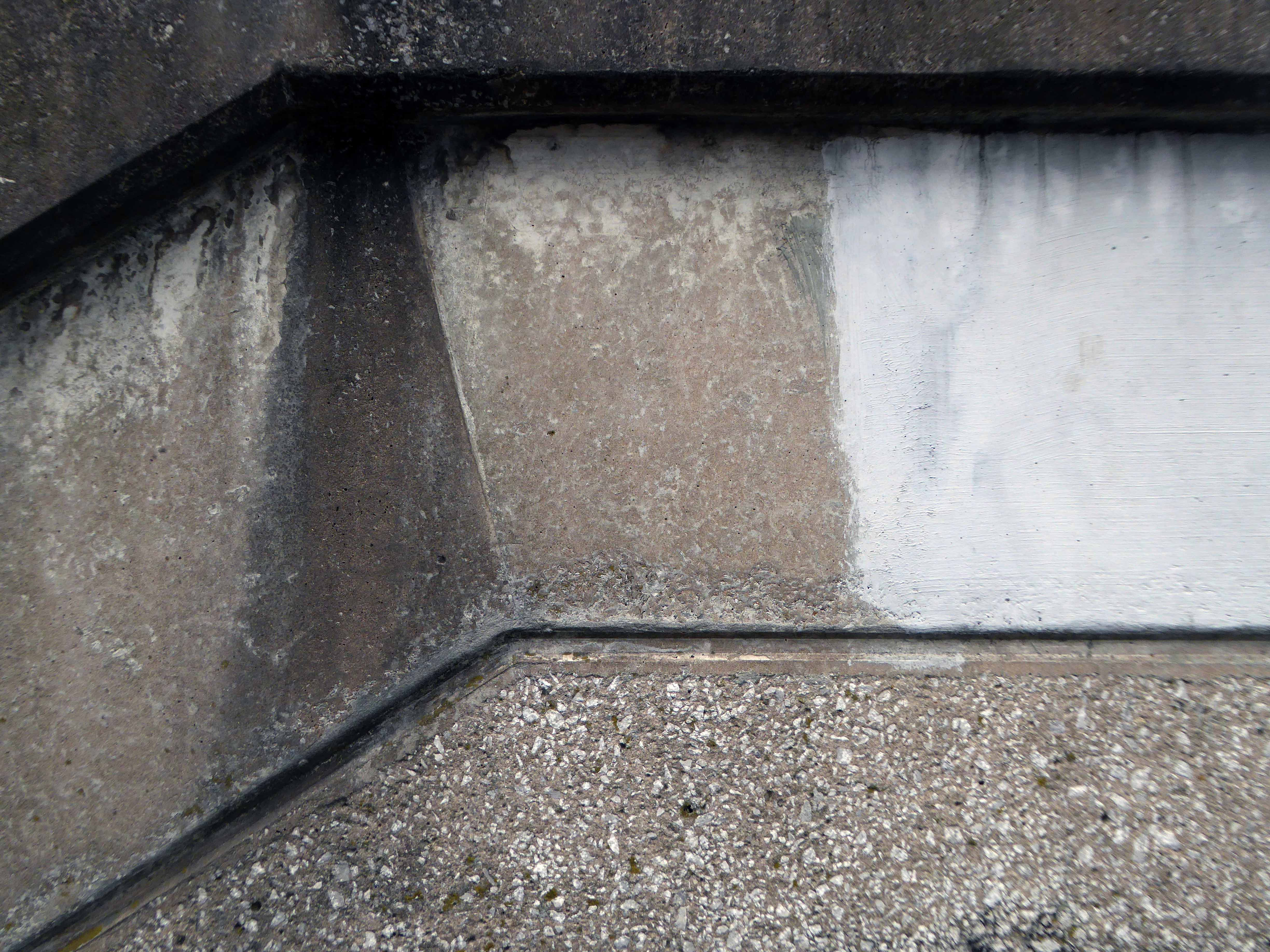