It never fails to surprise, turning the corner of a somewhat anonymous suburban street to find:

A building of outstanding importance for its architectural design, advanced liturgical planning and artistic quality of the fixtures and fittings.

The Benedictines came to Leyland in 1845 and the first Church of St. Mary’s was built on Worden Lane in 1854. The Catholic population was small at this time, but had grown to around 500 by 1900. Growth was assisted by the industrial development of Leyland and after the Second World War the town was earmarked as the centre of a new town planned in central Lancashire. By the early 1960’s, the Catholic population was 5,000. Fr Edmund Fitzsimmons, parish priest from 1952, was a guiding force in the decision to build a large new church of advanced liturgical design, inspired by progressive continental church architecture of the mid 20th century.  The church was designed by Jerzy Faczynski of Weightman and Bullen. Cardinal Heenan blessed the foundation  stone  in  1962  and  the  new  church  was  completed  ready  for  its consecration and dedication by Archbishop Beck in April 1964.

Central altar. Entrance in large projecting porch with roof rising outwards and the roof slab cantilevered above the doors, its underside curving upward.

Large polychrome ceramic mural representing the Last Judgment by Adam Kossowski occupies the width of the porch above the two double- doored entrances.

Above these the exposed brick drum rises to the exposed, board-marked concrete folded roof. The aisle walls comprise thirty-six panels of abstract dalle-de-verre stained glass, totalling 233 feet in length, by Patrick Reyntiens, mostly in blues and greens. The theme is the first day of Creation. Suspended above the altar is the original ring-shaped light fixture, and also Adam Kossowski’s ceramic of Christ the King.

Further original light fittings are suspended above the congregation.

The font is placed in the narthex, in a shallow, marble-lined depression in the floor. It comprises a concrete cylinder with an inscribed bronze lid.

Behind it is a tapestry representing the Trinity, designed by the architect J. Faczynski.

Many thanks to Father John and the members of the congregation for the warm welcome that they extended to us on the day of our visit to their exceptional Grade II Listed church.

One fine day – whilst walking back to and/or from happiness, in the general direction of Blackburn town centre, I happened to chance upon three towers.

Whilst not in any sense Tolkienesque – for me they held a certain mystique, wandering unclad amongst swathes of trees and grass.

Three thirteen-storey slab blocks built as public housing using the Sectra industrialised building system. The blocks contain 183 dwellings in total, consisting of 72 one-bedroom flats and 111 two-bedroom flats. The blocks are of storiform construction clad with precast concrete panels. The panels are faced with exposed white Cornish aggregate. Spandrel panels set with black Shap granite aggregate are used under the gable kitchen windows. The blocks were designed by the Borough architect in association with Sydney Greenwood. Construction was approved by committee in 1966.

Providing an excellent backdrop for the passing parade.

Each entrance porch with a delightful concrete relief on the outer face.

On the reverse a tiled relief – sadly painted over.

They are well proportioned slabs set in ample open landscape dotted with mature trees – maintained to a high standard.

The original design of Liverpool architect F.X. Velarde attracted so much attention when St Gabriel’s opened in 1933.

“The new building… marks a new departure from the accepted ecclesiastical style and is unique in this district,” said the old Blackburn Times when it was consecrated on April 8, 1933, by the Bishop of Blackburn, Dr P.M. Herbert.

But this is a church which throughout its life has been fraught with settlement cracks, repairs and redesign – it’s original towers truncated and clad, flat roofs pitched and timbers replaced.

For 34 years ago, the landmark building was facing possible demolition — with the parish confronted with a then-immense bill of £15,000 for repairs. The crisis was due to serious damage to the roof timbers caused by water penetration.

Eventually, it took £40,000-worth of refurbishment inside and out lasting until 1975 to save St Gabriel’s — at considerable expense to its original appearance. The main tower was shortened by six feet and later clad at the top with glass-fibre sheathing while the east tower was removed altogether and its flat roofs were made into pitched ones to deal with the rotting roof timbers and problems of settlement.

In fact, the difficulties that its design and construction posed were recognised much earlier in 1956 when the church, which had cost £20,000 to build, was found to be in urgent need of repairs that would cost more than £1,500. For an inspection by the Diocesan Architect found that major defects in the flat roof could have serious consequences unless they were given early attention and portions of the parapet wall were found to have large cracks due to settlement while half the building’s brickwork needed pointing.

And so it now stands forlorn and unused – services are now held in the adjacent church hall. A series of interlocking monumental interwar functionalist brick clad slabs, once thought to resemble a brewery or cinema, now awaits its fate. Though it remains a thing of wonder in both scale and detailing, well worth a wander around if you’re passing.

Having never ever been, I thought it time to go.

Several trains from Stockport later, along the length of the East Lancs Line, I arrived at Burnley Manchester Road Station via the reinstated Todmorden Curve.

Having wandered aimlessly awhile, it was time for a spot to eat – and there it was a vision to behold before my very eyes.

We’re situated in the town centre on St James’ Street, just a little bit further down from DW Sports – the old JJB store and next to the entrance to the old Empire Theatre, when you get to the art gallery you’ve gone too far!

The menu had caught my eye – pie!

To get in and get some grub was my sole and urgent imperative.

A warm welcome awaited, and even warmer food, served with alacrity and aplomb – tasty homemade meat and potato pie, chips, peas and gravy. A soft light crust and mushiest mushy peas – a real delight, seen off in no time and all washed down with a piping hot mug of tea.

£4.40 all in – service with a smile, in cosy, comfortable, traditional café surroundings.

I’ll be back – go and treat y’self soon. 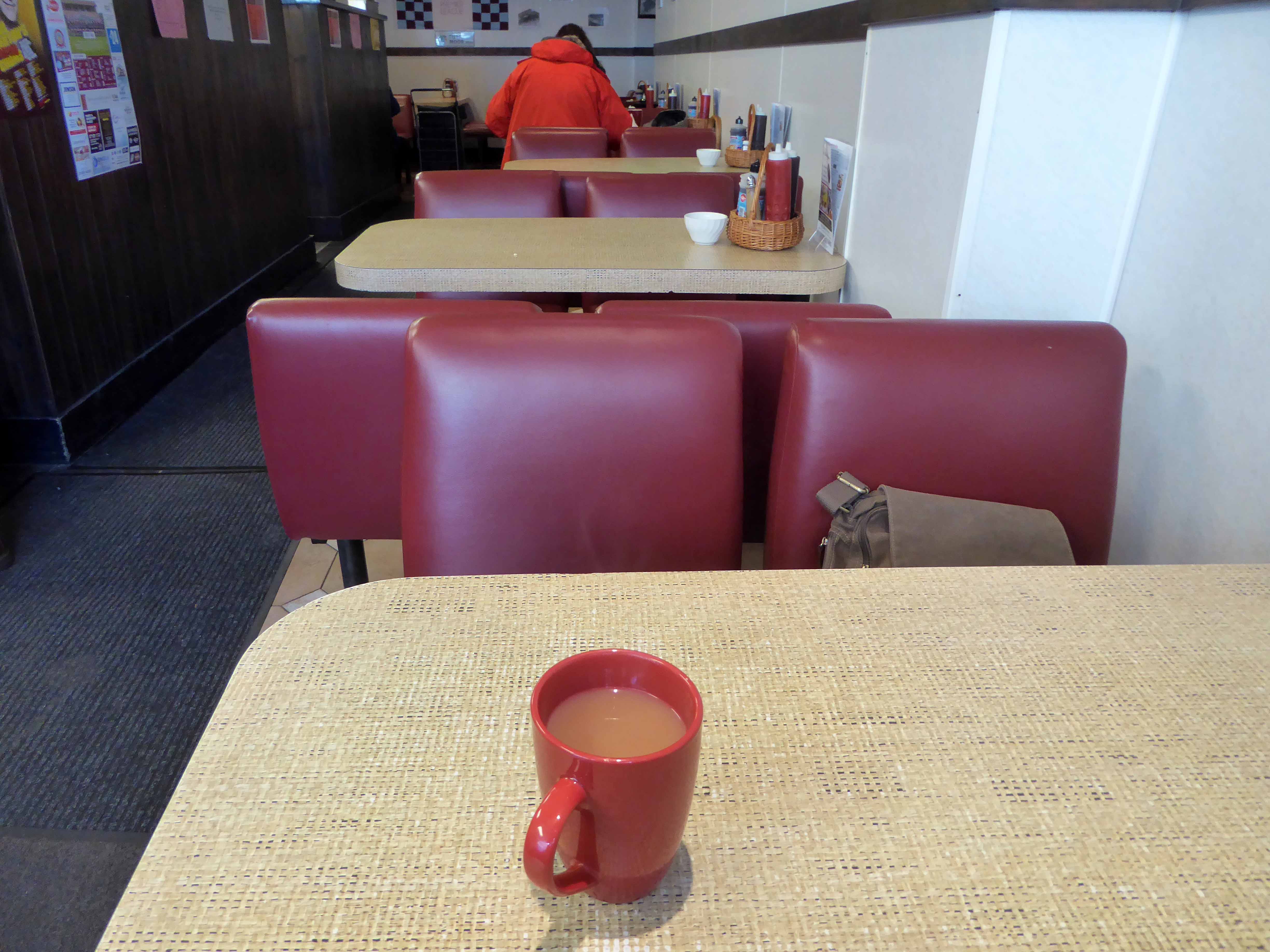 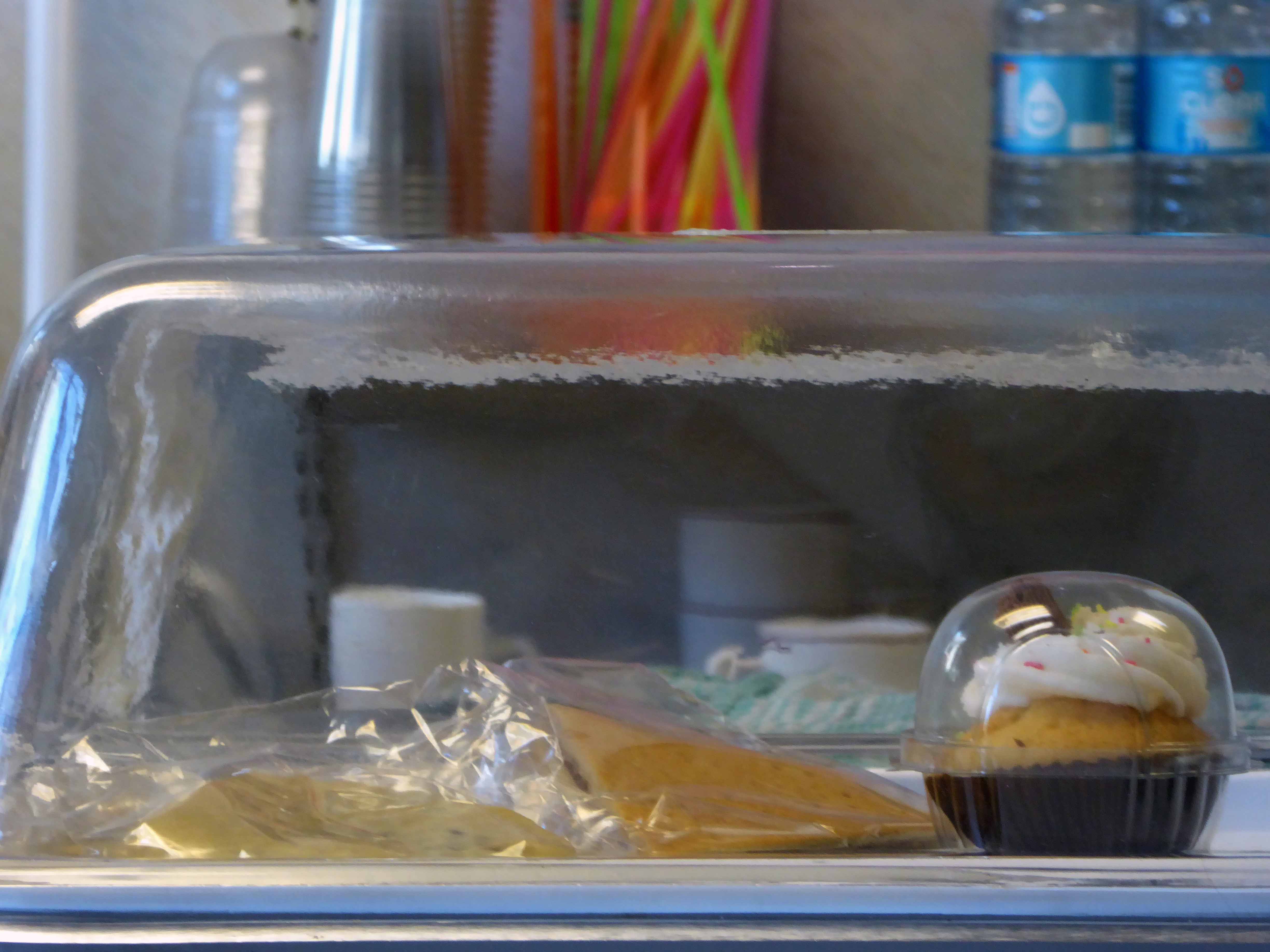 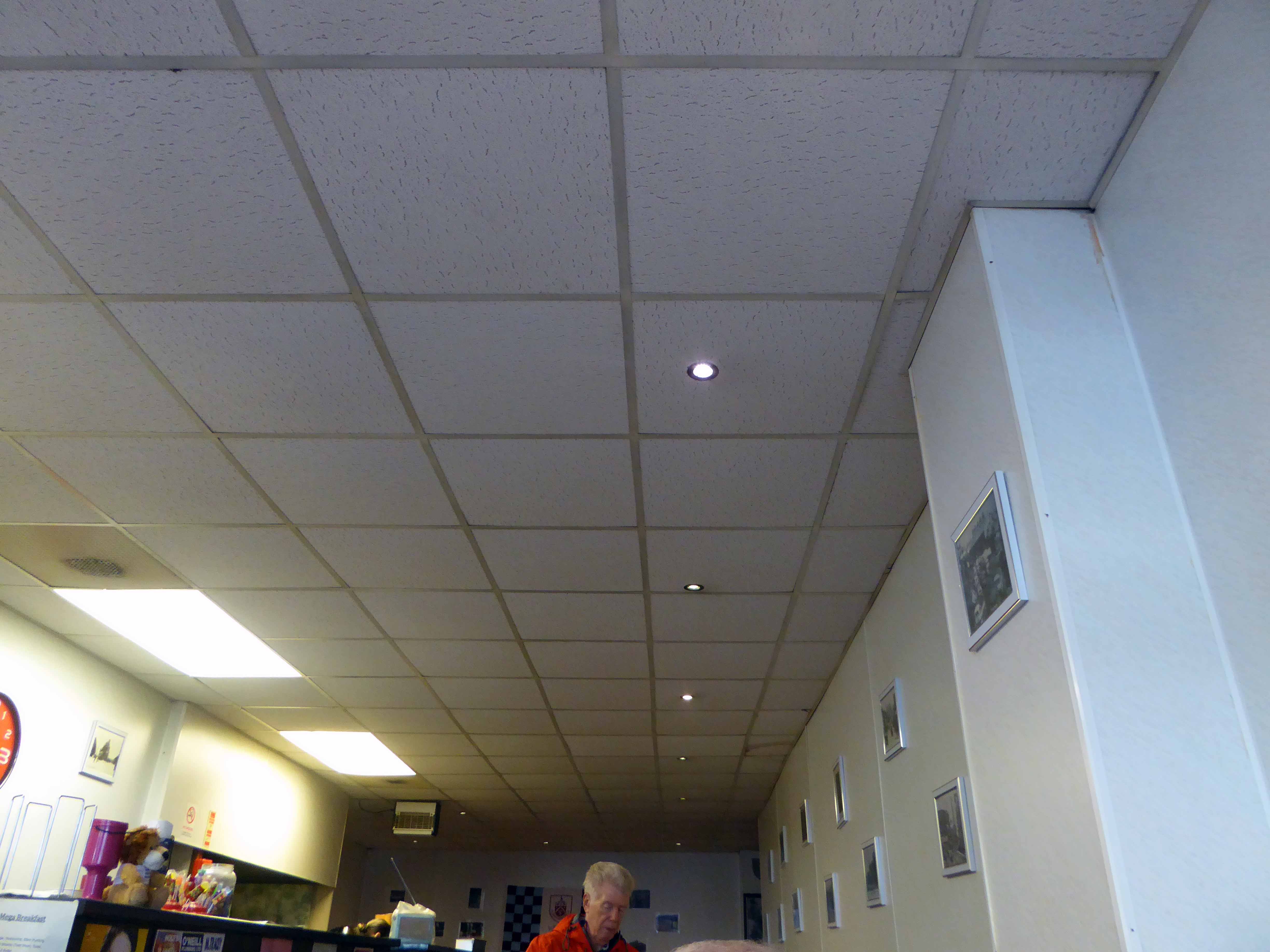 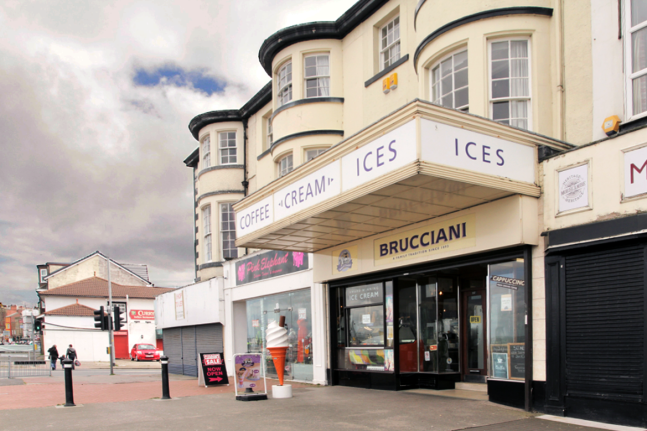 Built on the eve of war in 1939, the local paper feared that Brucciani’s might not be good for the sedate Victorian image of Morecambe and that its presence could be positively harmful to young people. Originally a milk bar, Brucciani’s typifies the simple, geometric ‘high street deco’ styling popular at the time. The brown wood and chrome exterior has black lacquer base panels to the street, porthole lamps above the doors, ziggurat pattern doors, classic deco handles and original menus. The interior preserves extensive wall panelling, a slightly reworked counter, red Formica tables, red upholstered chairs, wall-to-wall etched glass of Venetian canal scenes, mirrors, deco clocks and even the original penny-in-the-slot cubicles in the cloakrooms.

I’ve been coming here for over ten years now, alone or in company, come rain or shine and without fail, as sure as ice is nice, I have a banana spilt – or to be more precise a Banana Royal.

This is a café with a café menu, café furniture, café staff and service.

It only ever wanted and wants to be a café, unchanged by the uncaring winds of vicissitude and fashion. To tread the turquoise and tan linoleum, ‘neath the period lighting fixtures and fittings, to be seated on the warm red leatherette, one elbow on the circular Formica table is to enter into into a pact with a perfect past.

It’s on the front you can’t miss it – overlooking the Sunset Bay. 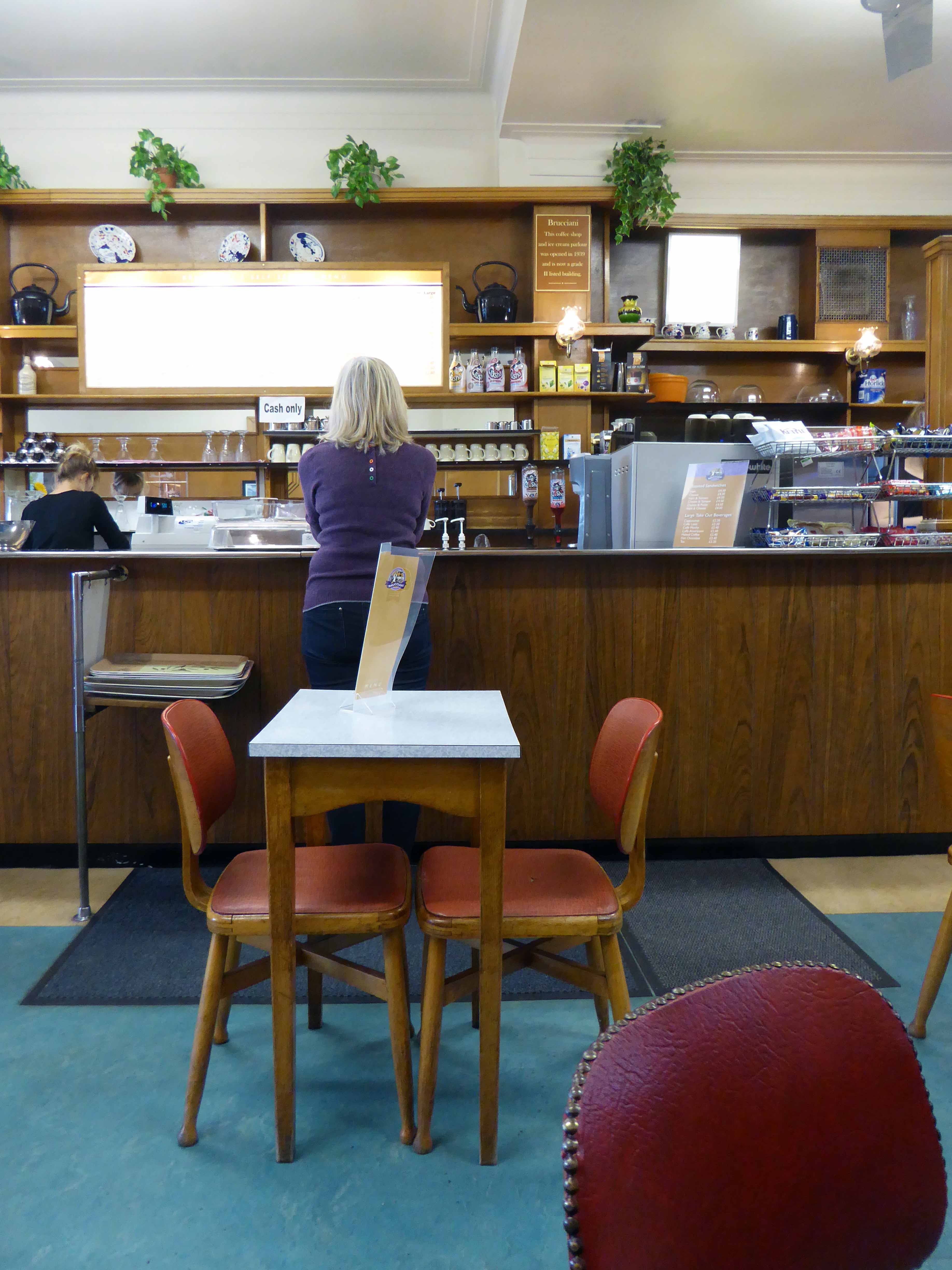 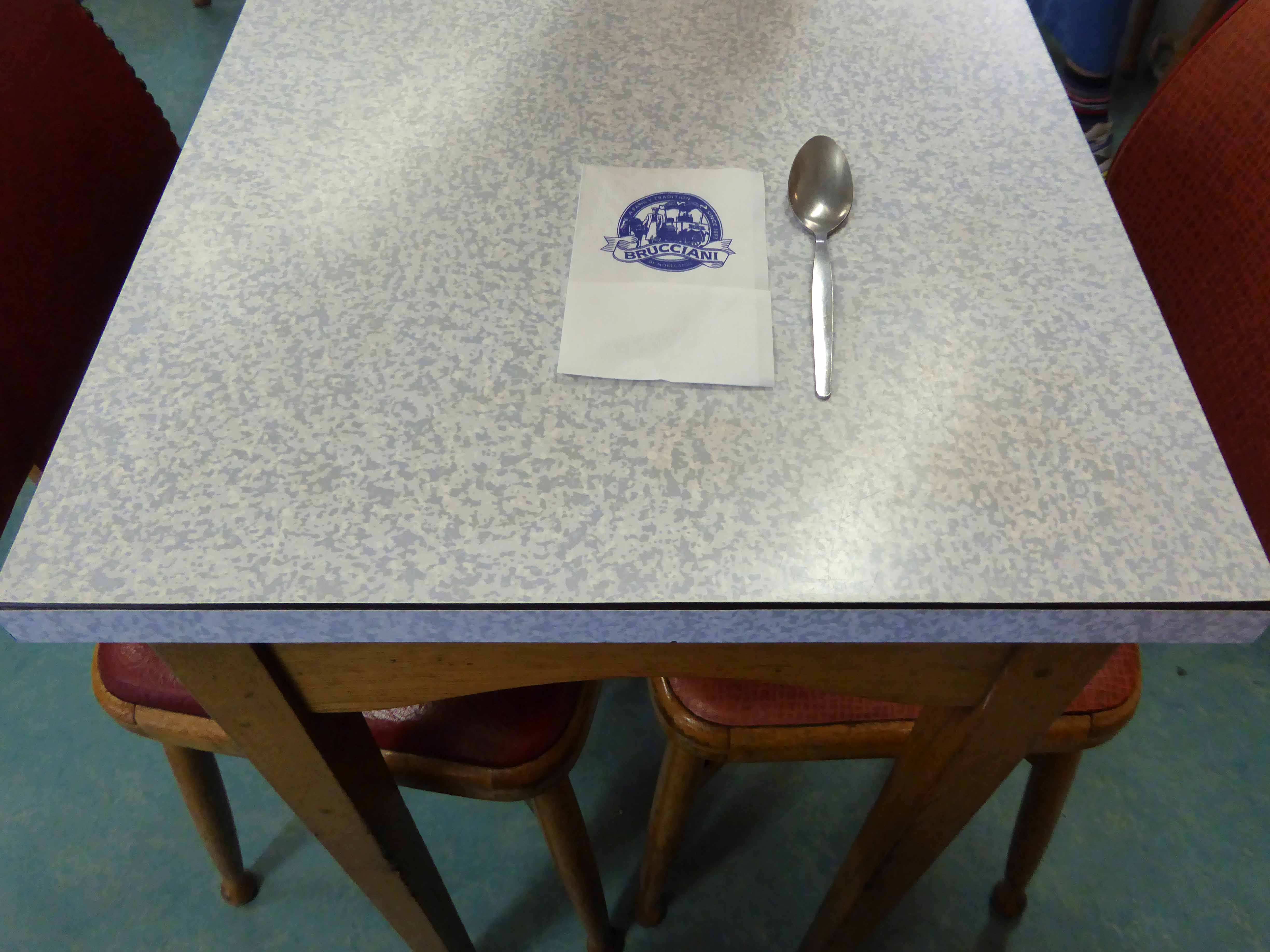 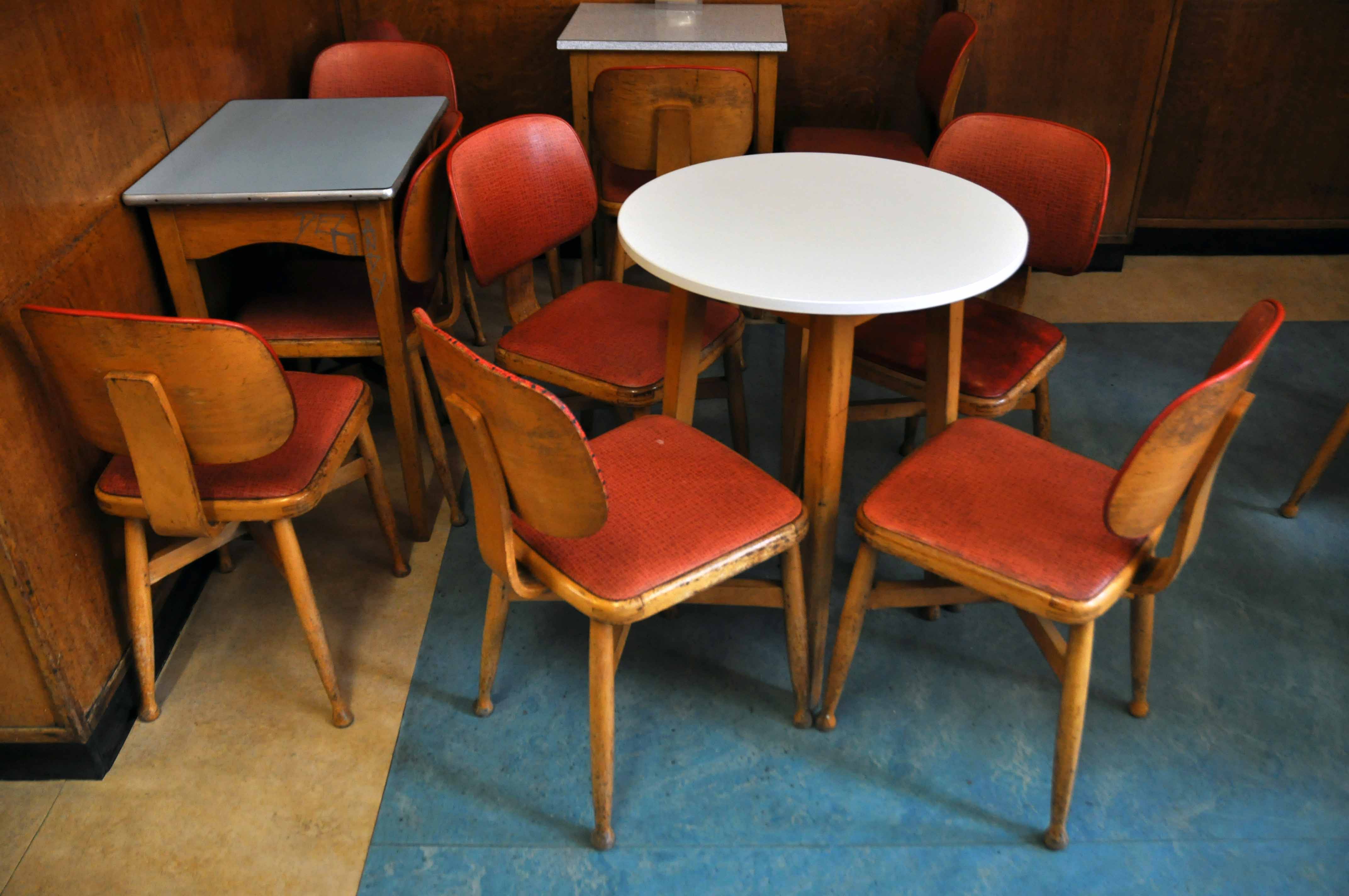 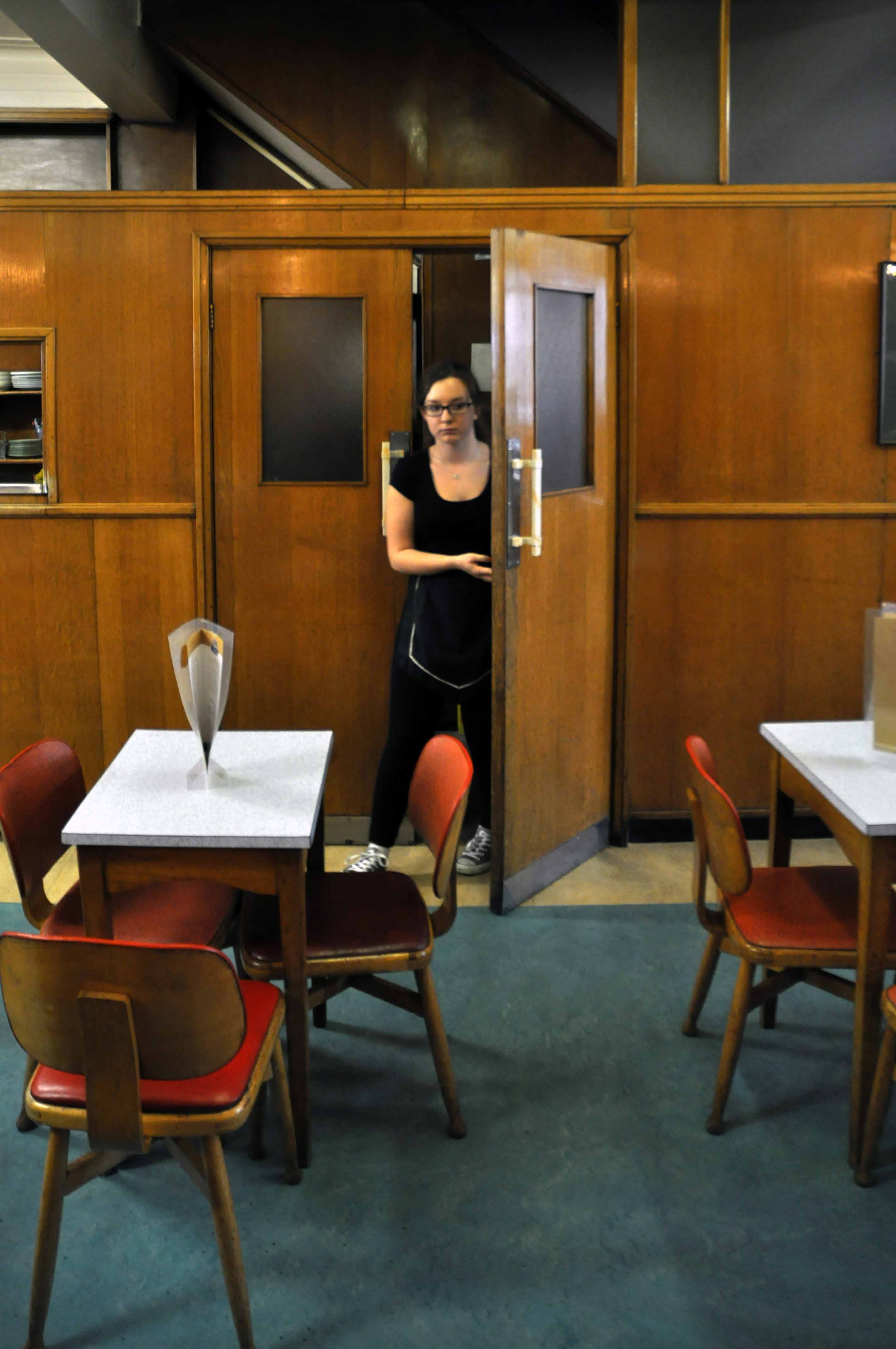 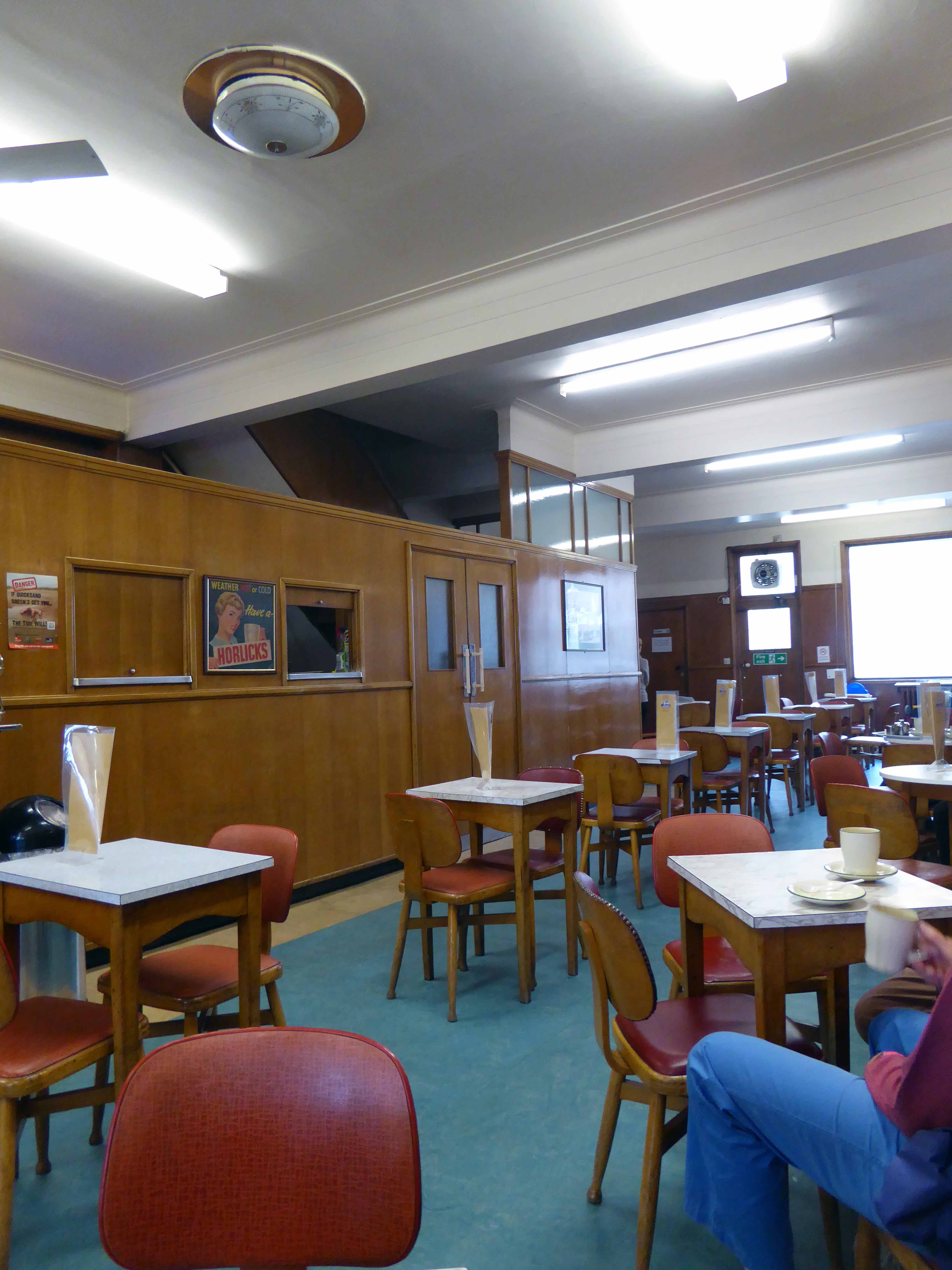 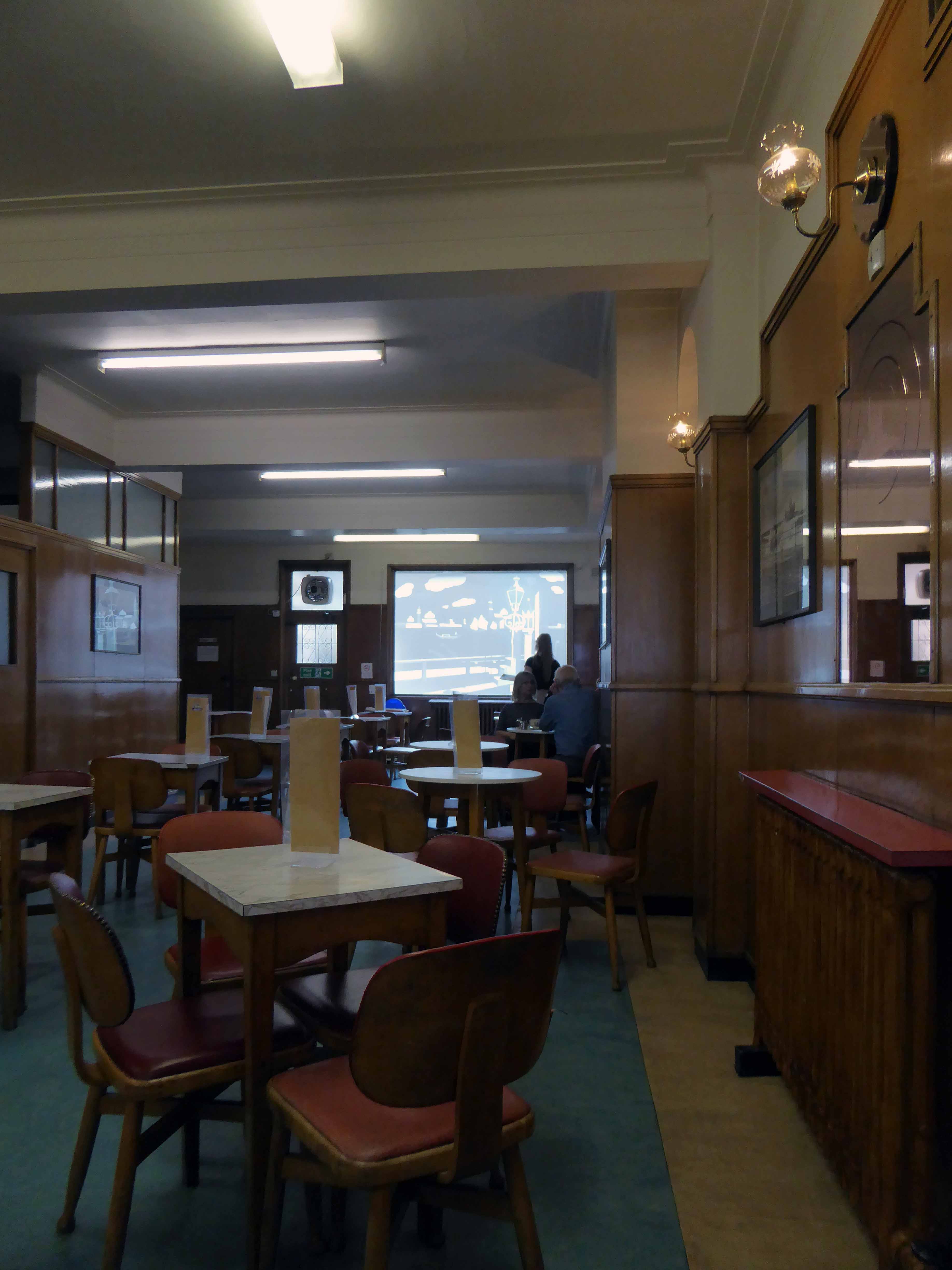 I’ve been here, before recording the prelude to the epilogue, here at Preston’s Indoor Market.

So on my return this February, I find that the inevitable end, is indeed now past nigh.

Boarded and shuttered awaiting demolition – Waiting for The Light to shine: 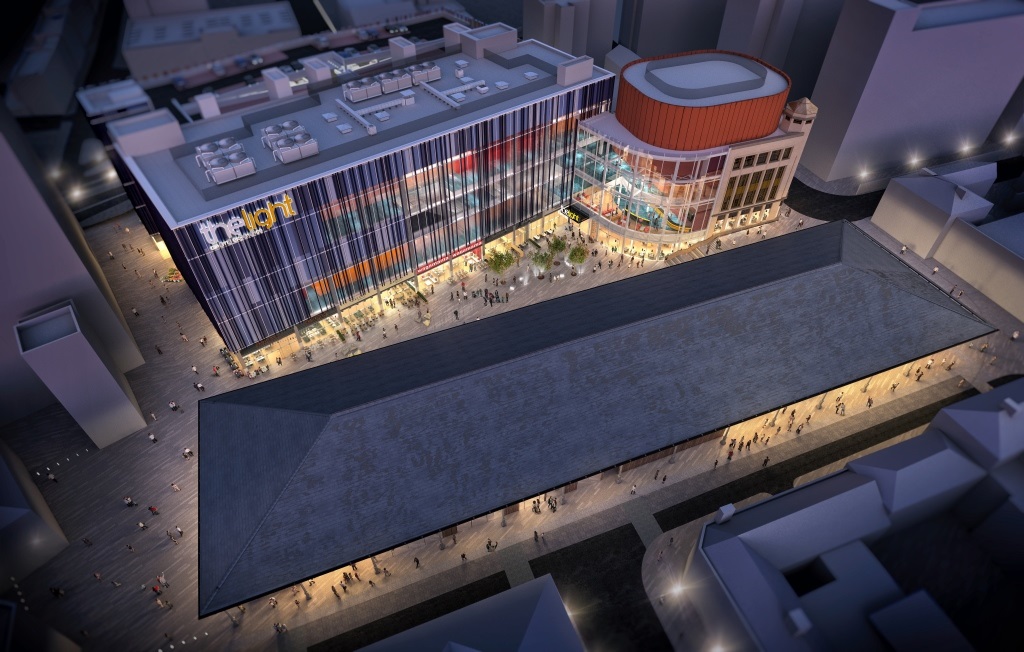 Muse is working in partnership with the council on the plans, made up of an 11-screen cinema operated by The Light, seven family restaurants, a 593-space multi-storey car park and public realm improvements.

The project forms part of the wider regeneration of the Markets Quarter which includes the full refurbishment and redecoration of the grade two-listed market canopies and the construction of a glazed Market Hall.

Preston to their credit have become an exemplar for inward urban regeneration, and the work undertaken so far in the market area is bringing new life and trade to the area.

That said, it is always saddening to see the architecture of the Sixties swept aside.

So come take one last wander through the concrete warren of ramps, underpasses and tunnels of the unwanted indoor market. 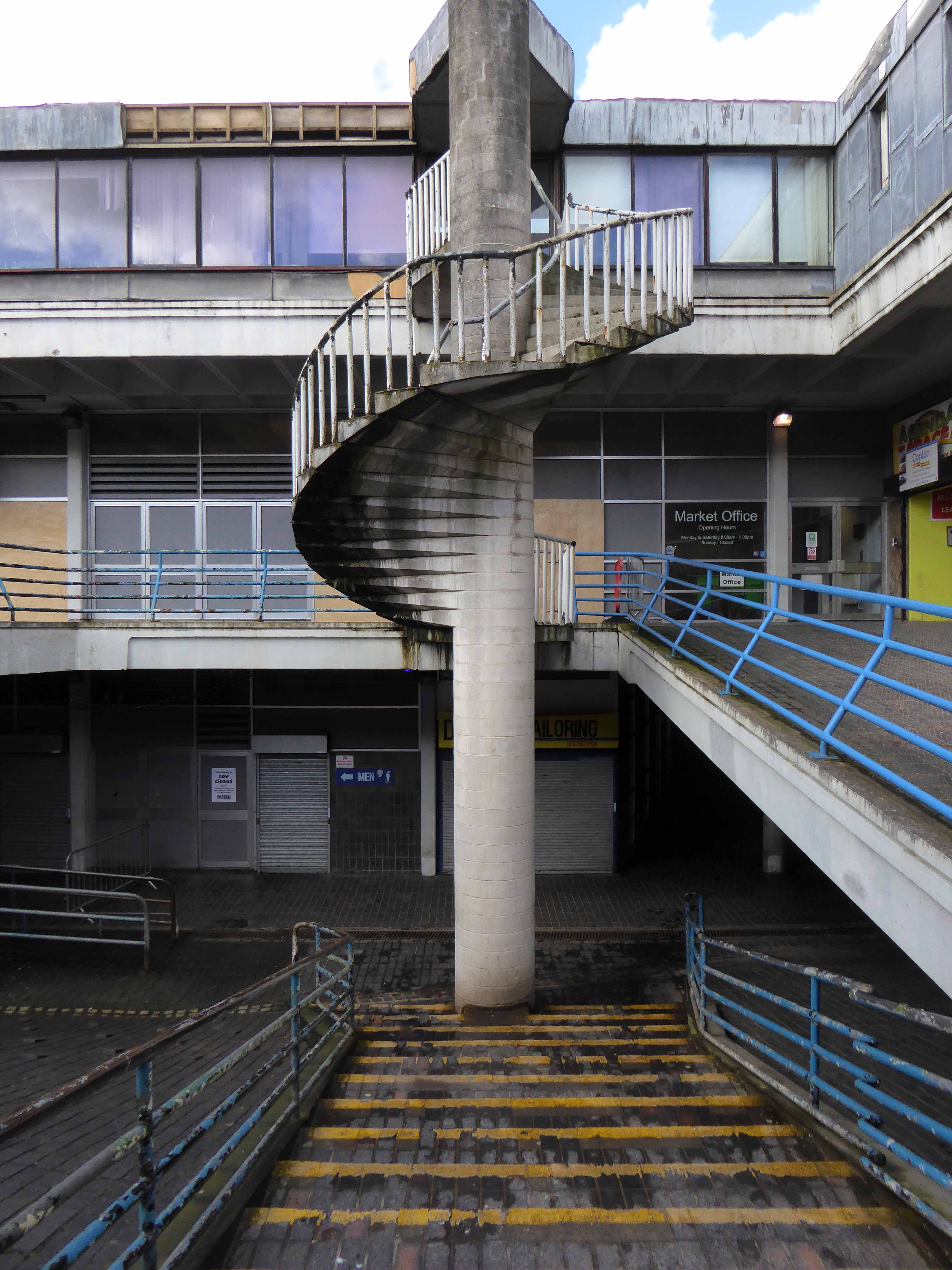 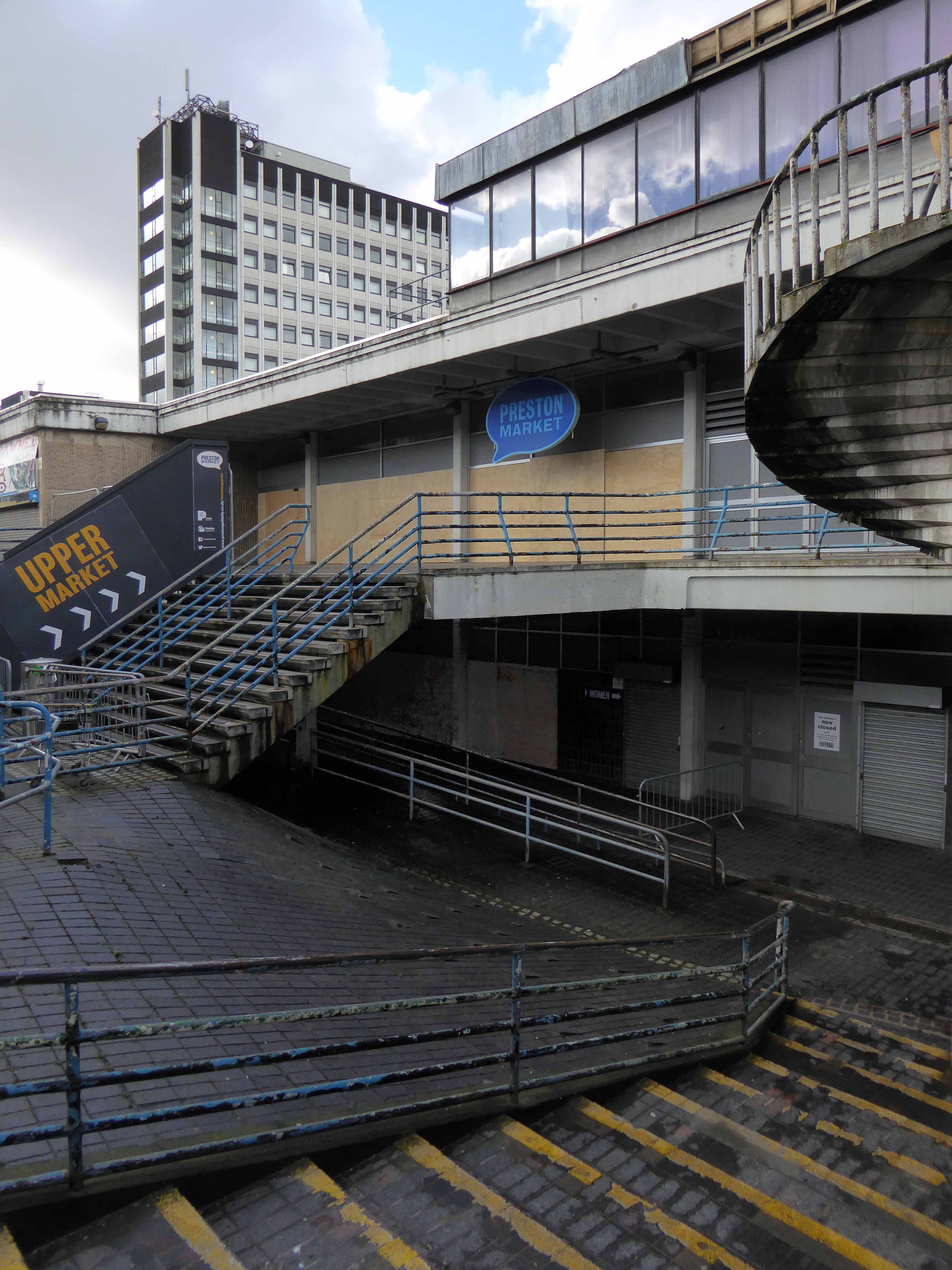 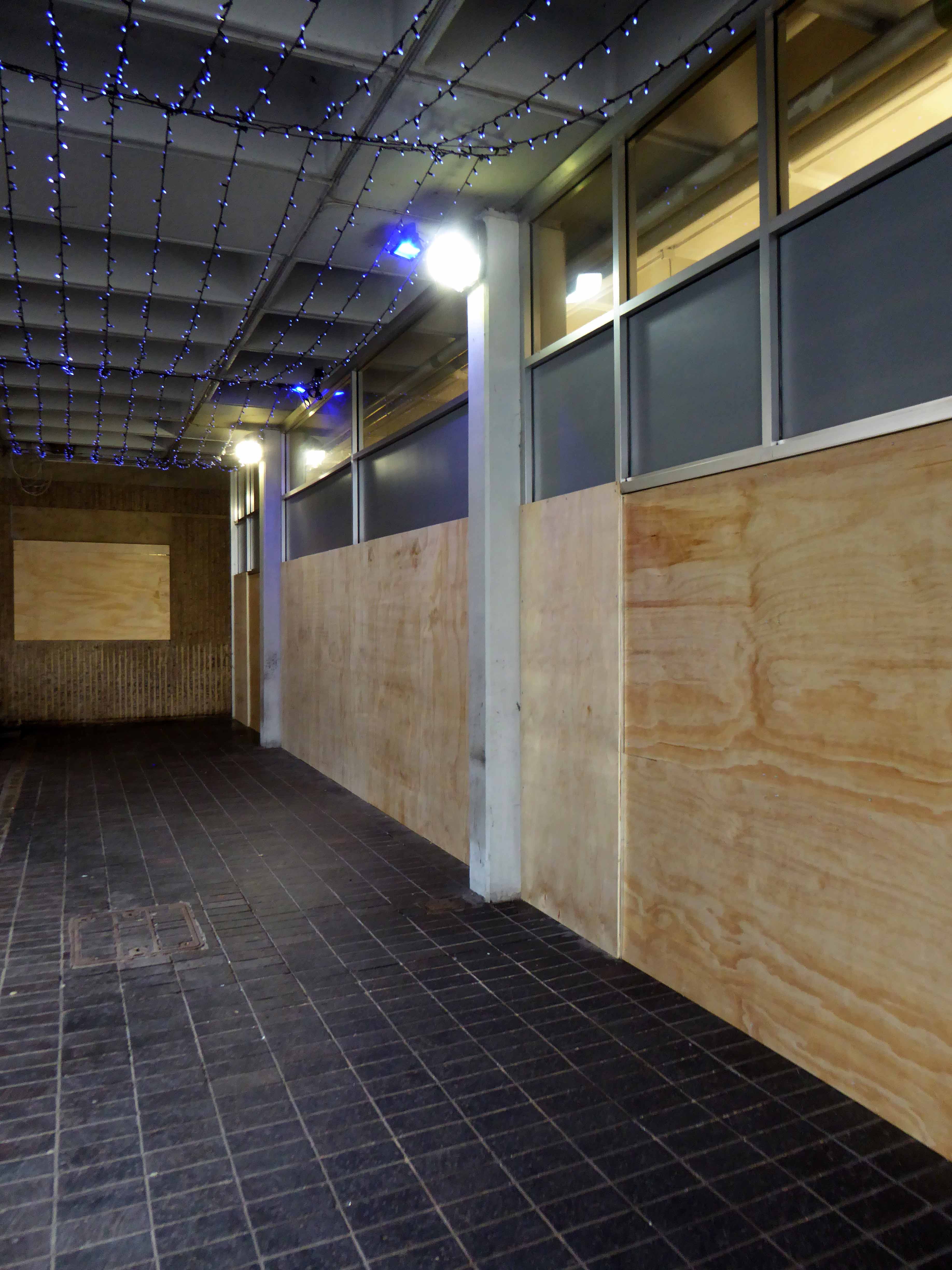 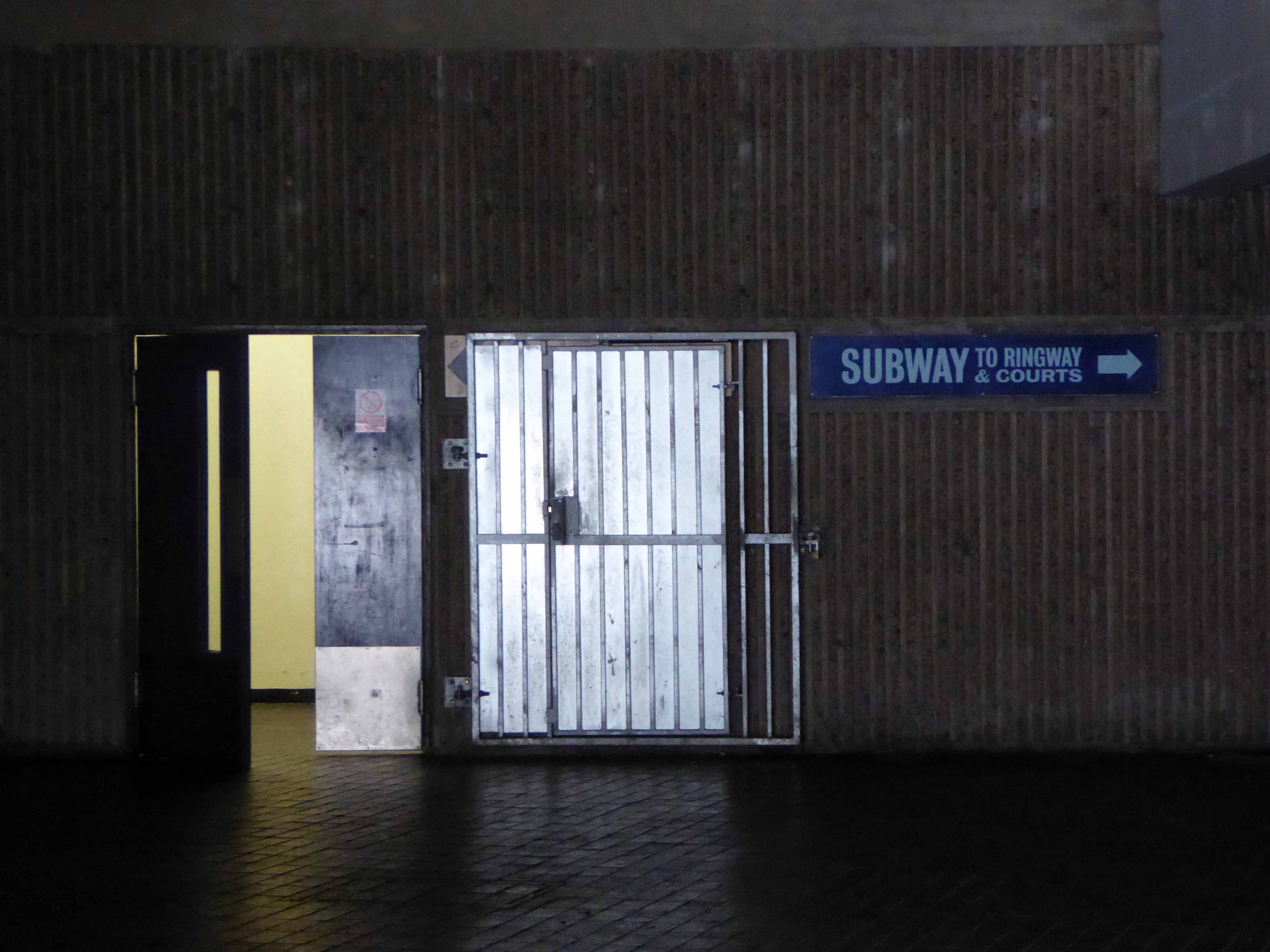 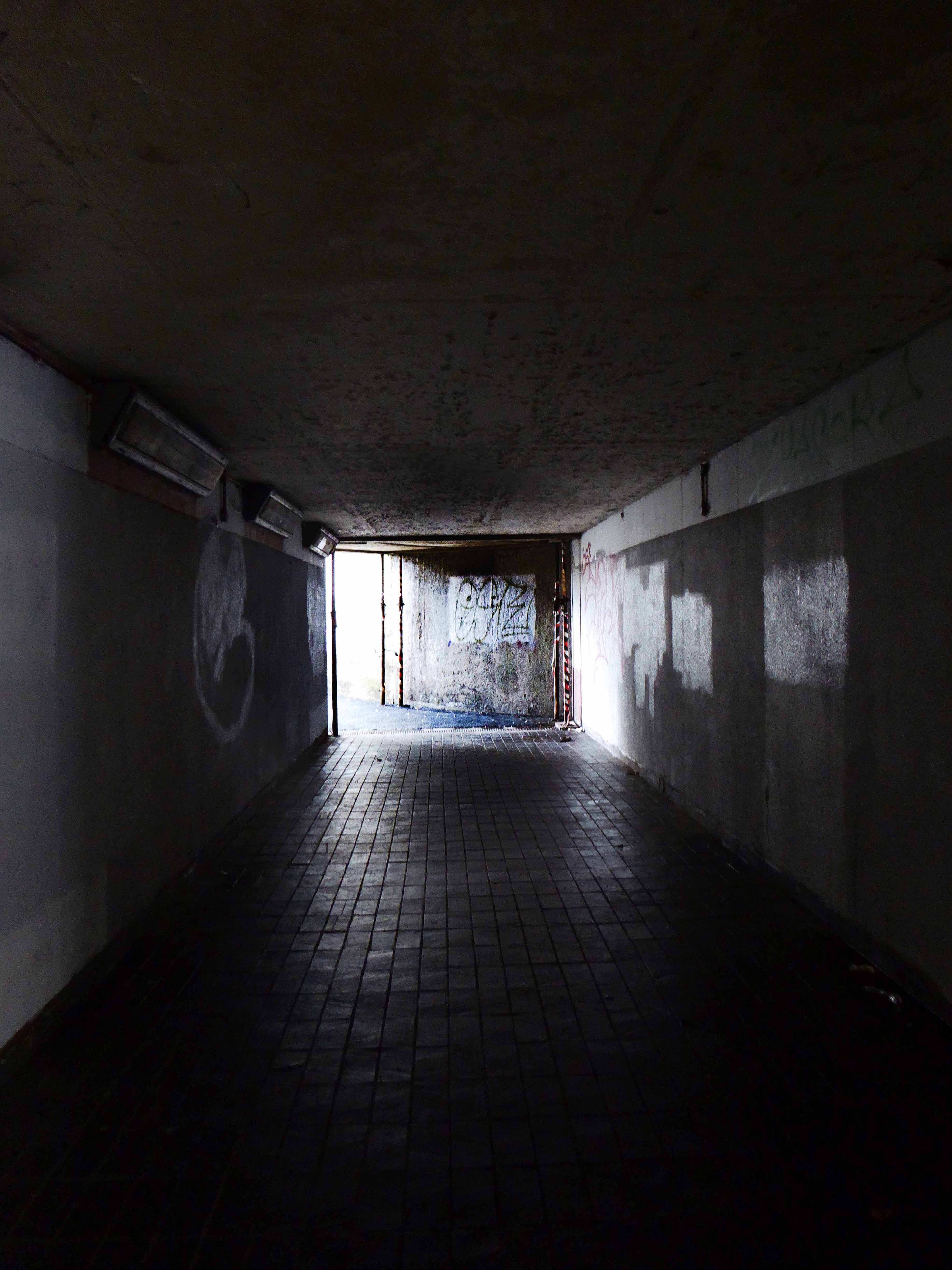 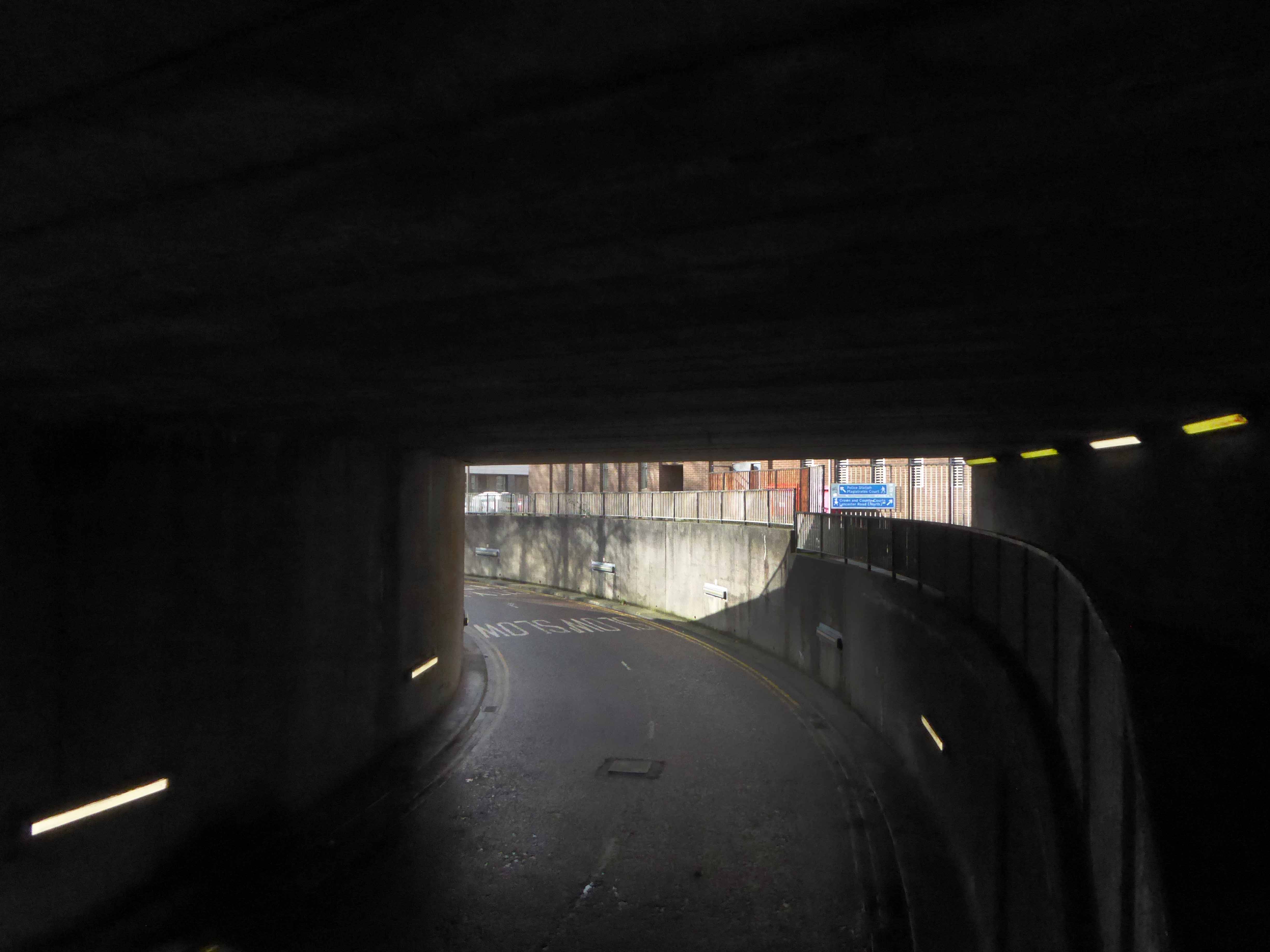 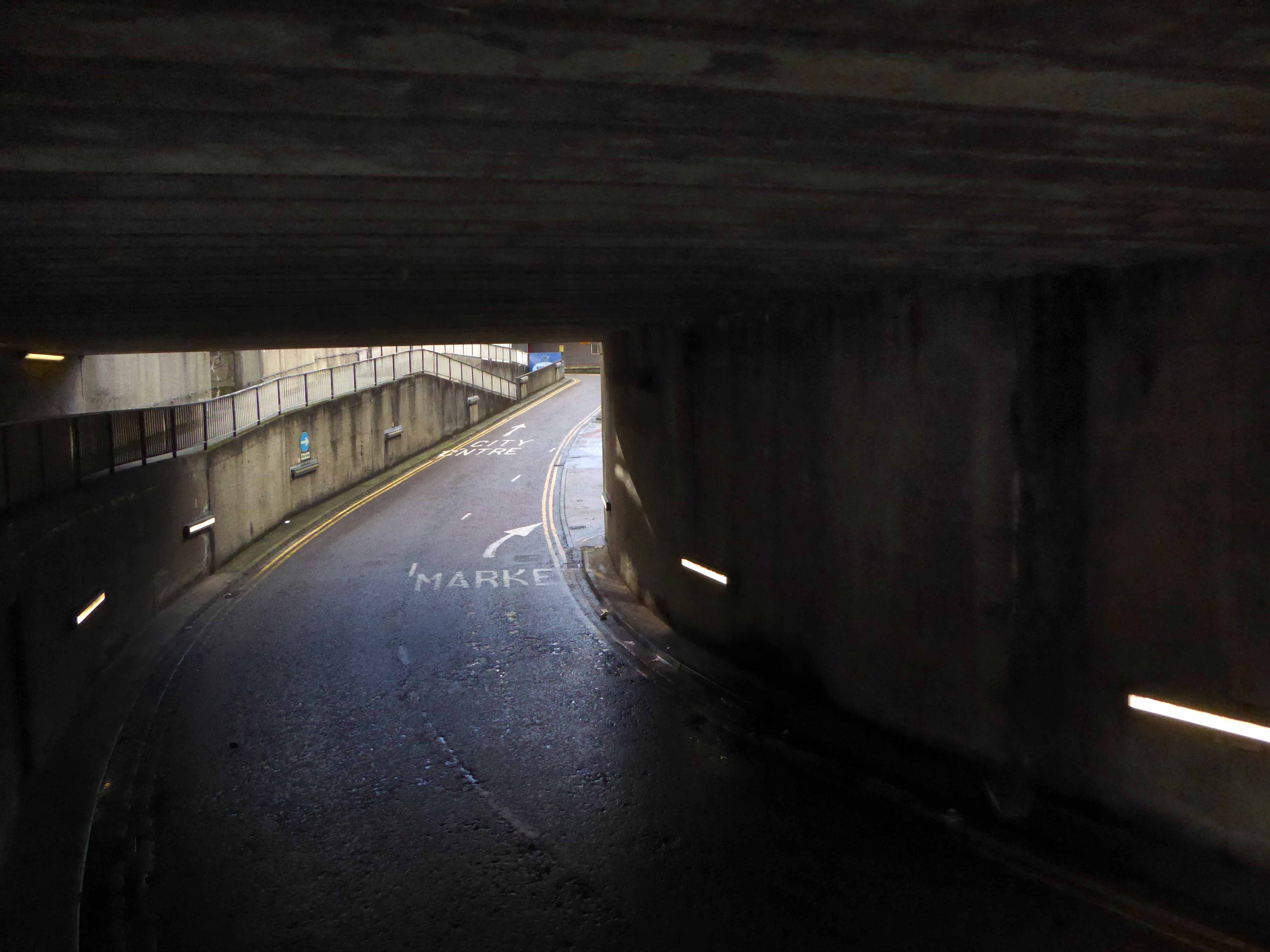 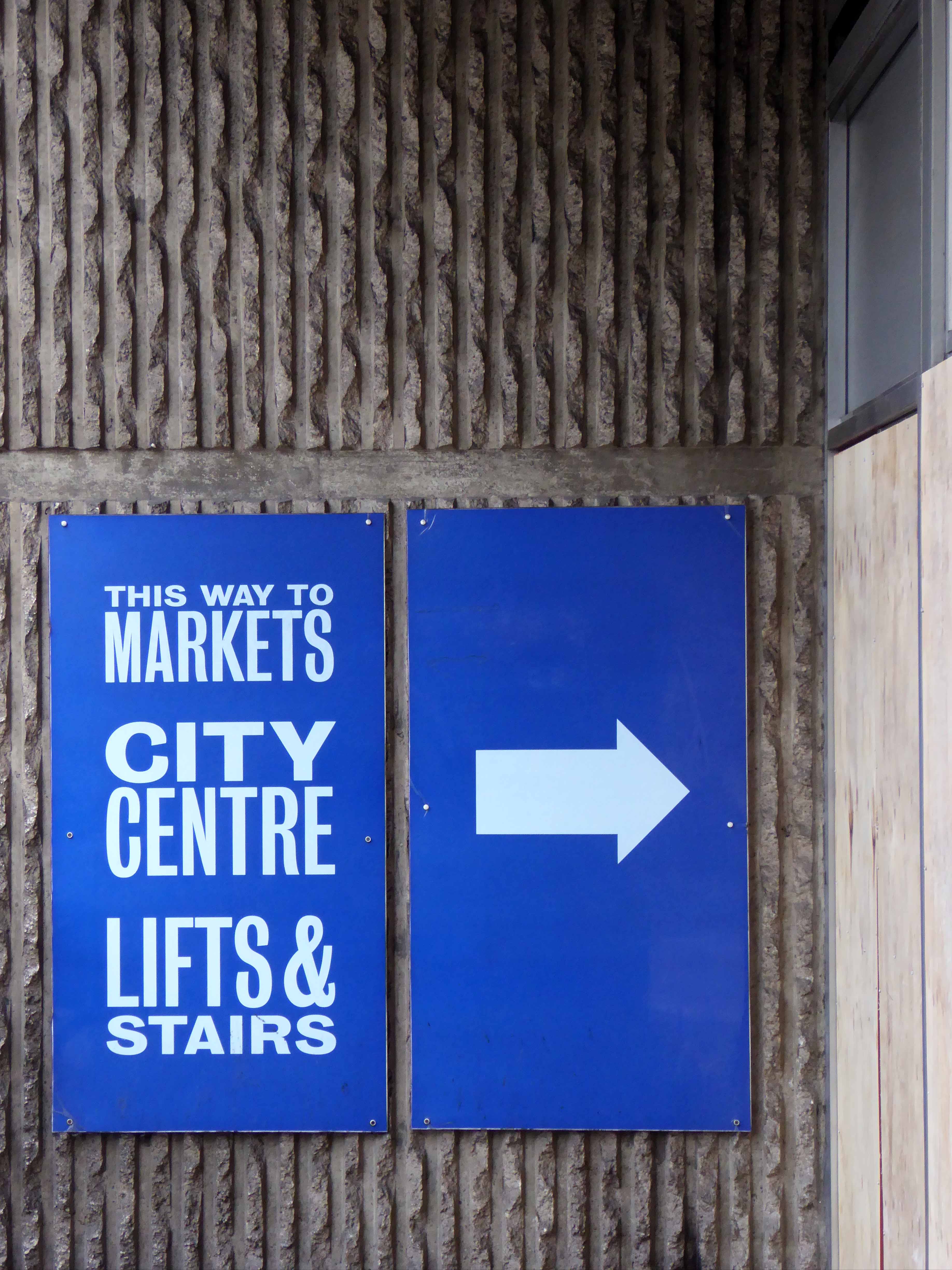 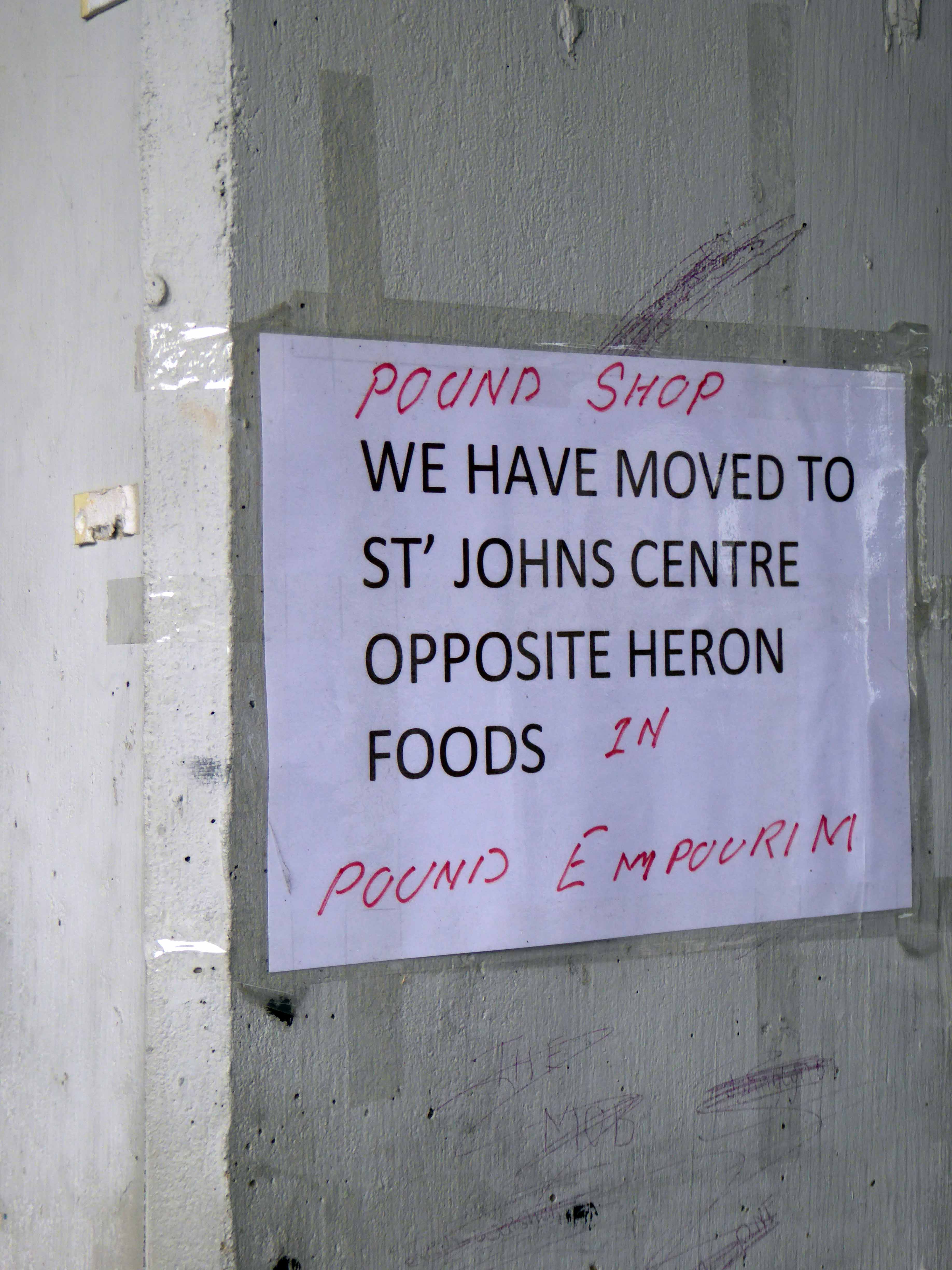 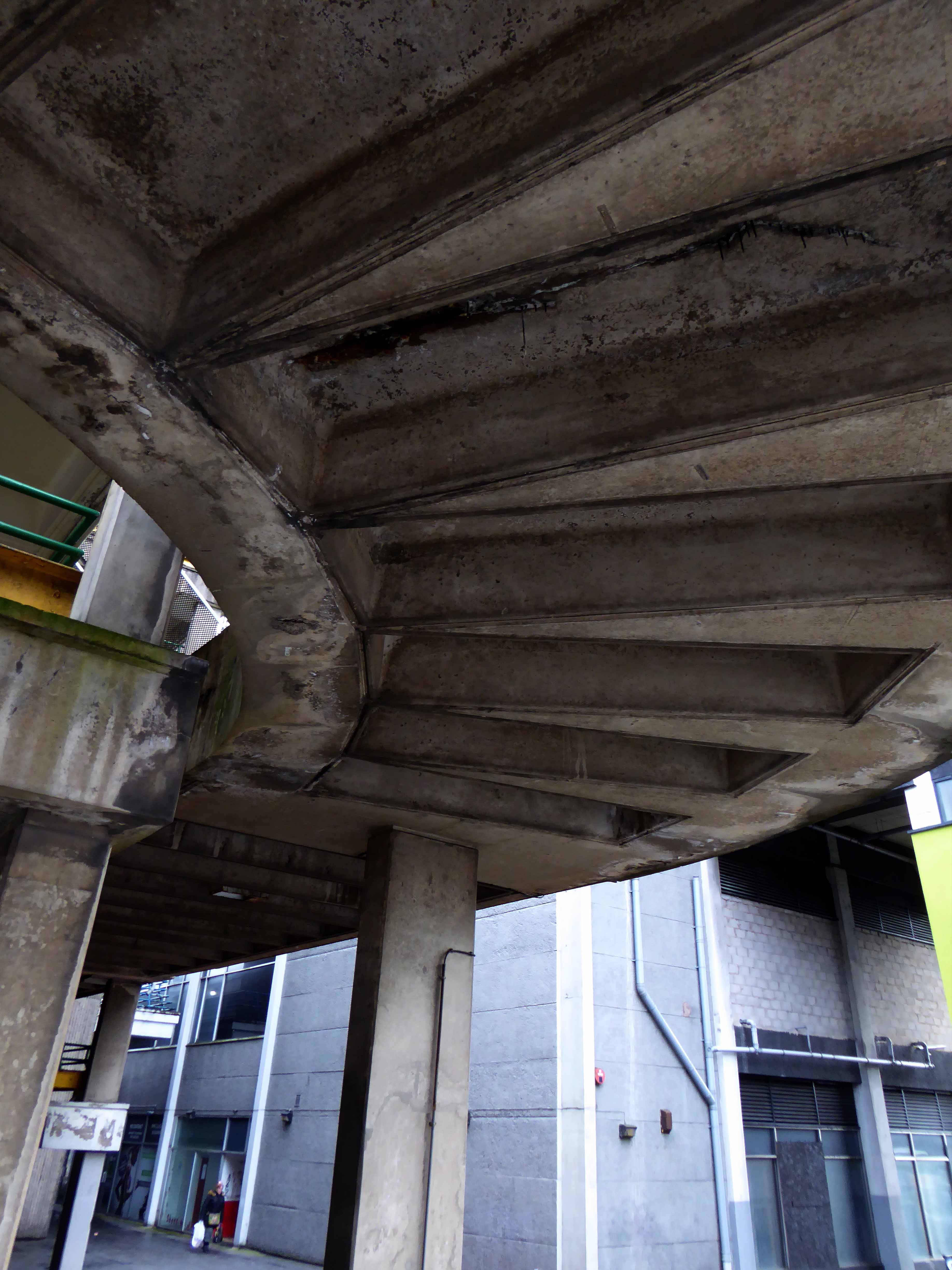 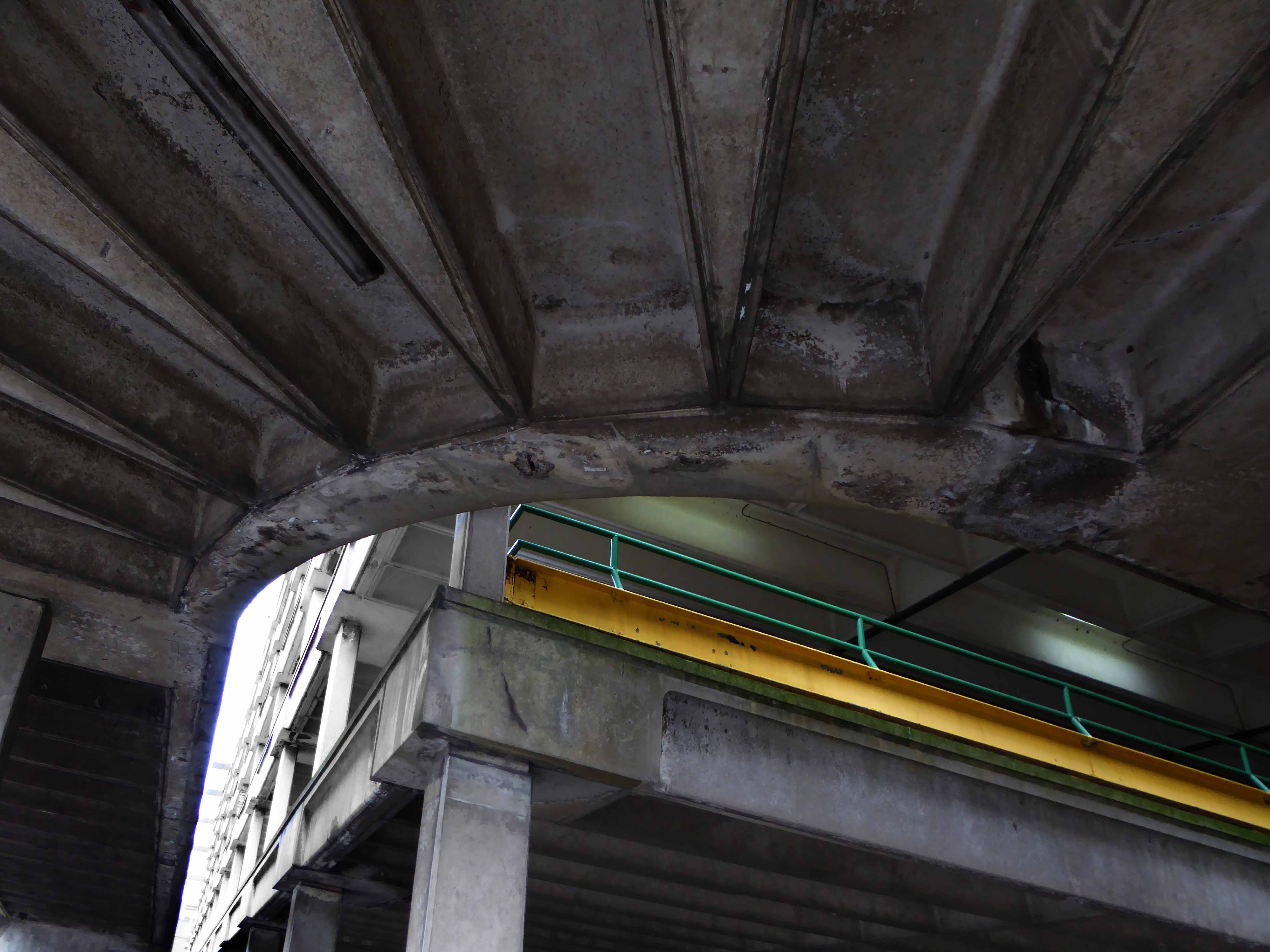 Once upon a time the future was shop-shaped and utopian, the Modernist reliefs a welcome relief from post-war doom and gloom, public decorative art was off the ration for good, or so it seemed. Small retail units, housed small local operators, their shiny well-washed fascias, glowing with graphic pride and diversity, slab serif and decorative script the order of the day.

And lo it came to pass and underpass – the future was here yesterday. 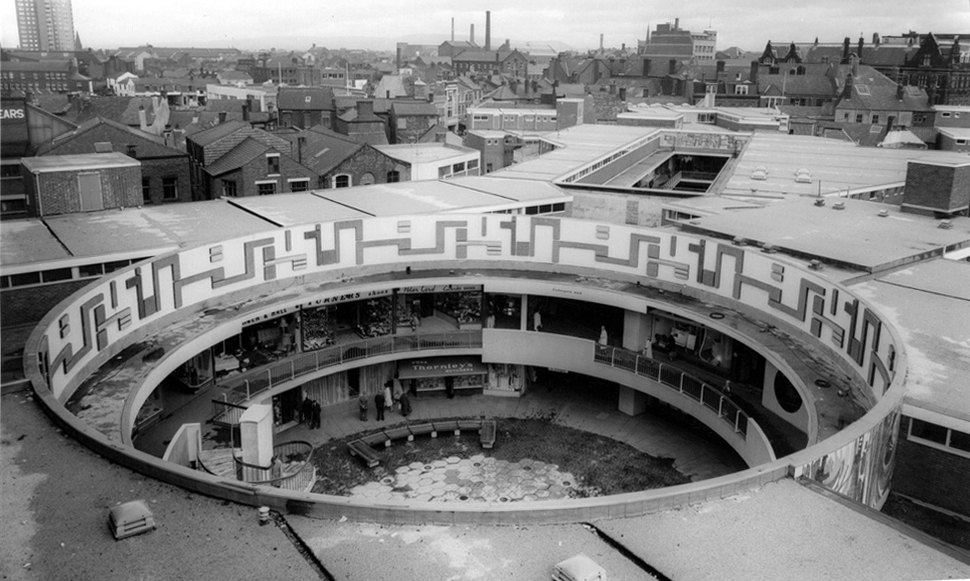 Get off the bus on Fishergate and walk right on in. 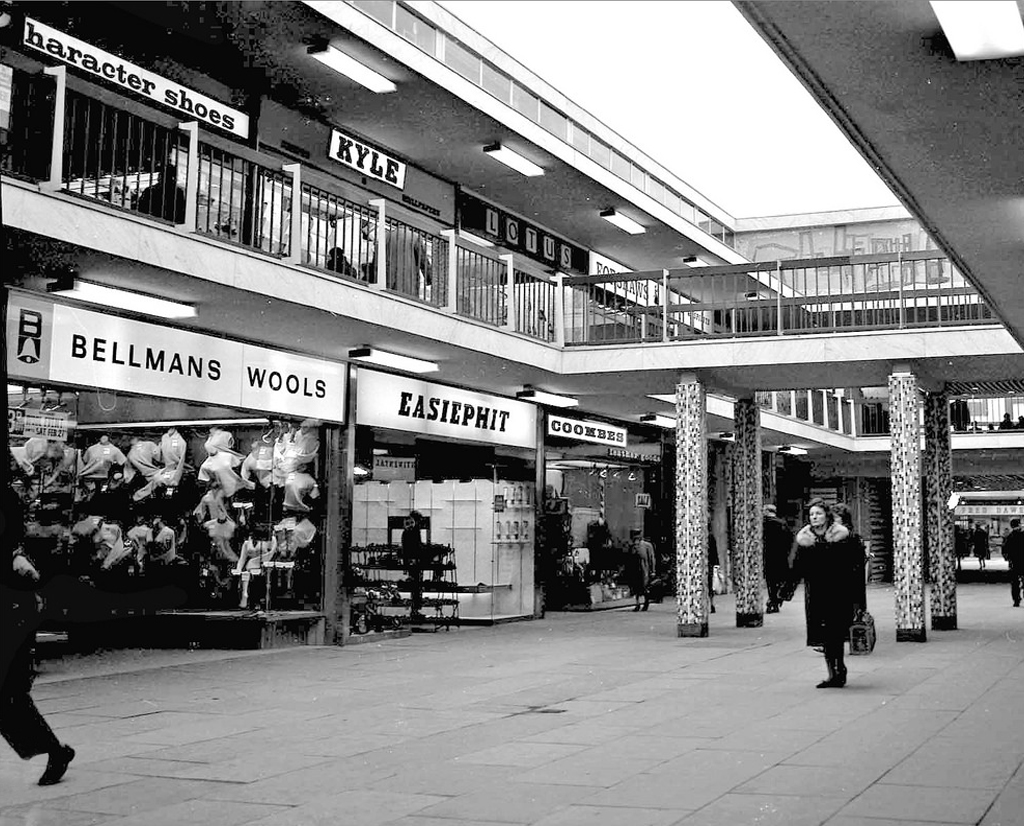 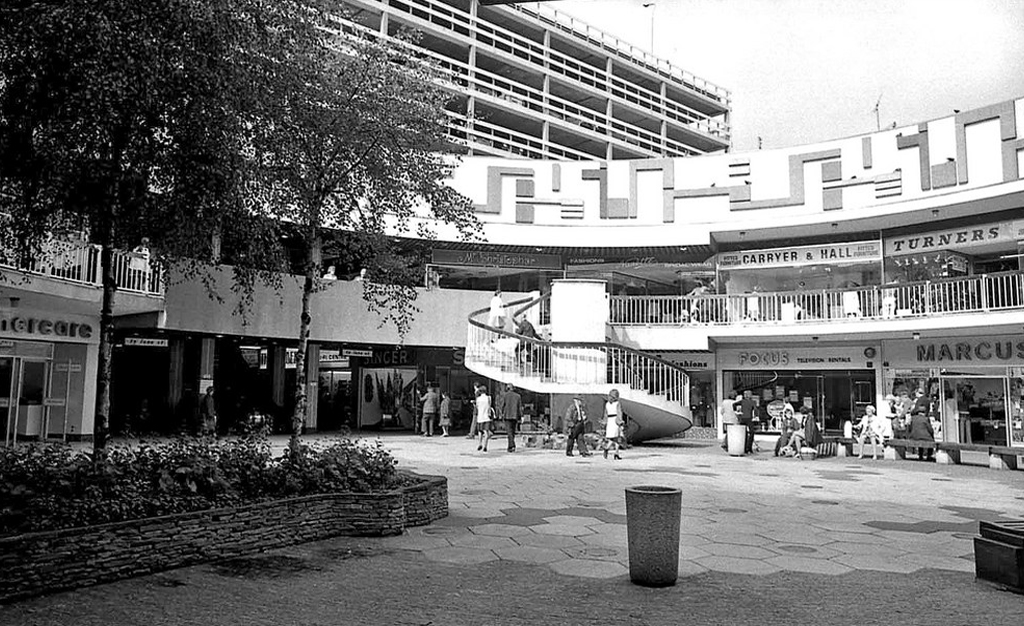 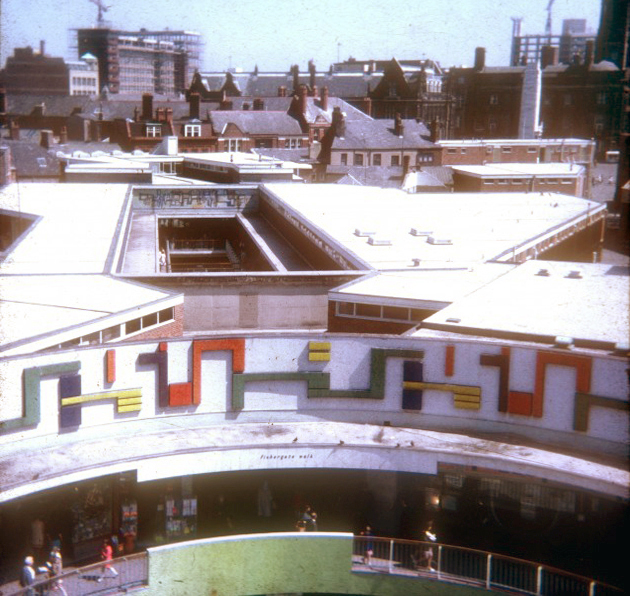 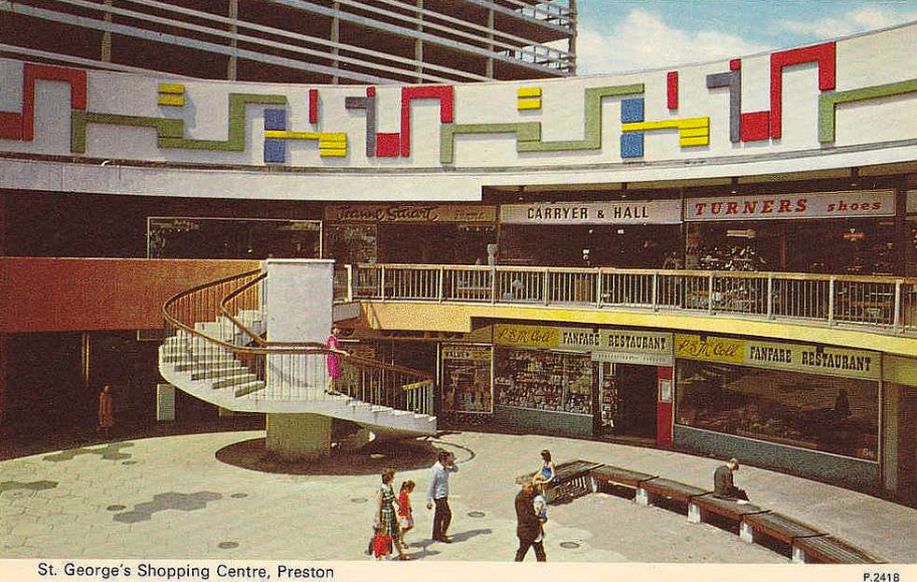 It was originally an open air centre, and was roofed over during refurbishment in 1981. It was further refurbished in 1999.

In May 2004, when The Mall Company took over the centre, they were greeted with an ageing shopping centre. The shopping centre was rebranded as The Mall, and a massive development scheme was planned. Small stalls, main shops, cafes, restaurants, toilets, and escalators were overhauled.

In March 2010, the shopping centre was acquired by Aviva Investors for £87 million. In September 2010, The Mall was rebranded under its original name St George’s Shopping Centre.

So welcome back to today – stripped of distinctive decoration, covered in and given the international sheen of absolutely nowhere at all.

In intemperate template for the future.

Archival images from the Preston Digital Archive and Peter Reed.