By wandering aimlessly, all places became equal, and it no longer mattered where he was.

The station as built in 1961 to a design by the architect William Robert Headle, which included and advertised a significant amount of the local Pilkington Vitrolite Glass. The fully glazed ticket hall was illuminated by a tower with a valley roof on two Y-shaped supports. The platform canopies were free standing folded plate roofs on tubular columns.

The new station building and facilities were assembled just a few yards from the 1960s station building and is the third build on the same site. The project came in at a total estimated cost of £6 million, with the European Union contributing £1.7 million towards the total funding. The new footbridge was lifted into place in the early hours of 22 January 2007.

The striking Pilkington’s glass-fronted building was designed by architect SBS of Manchester. Construction work was completed in the summer, with the new waiting rooms and footbridge opened to passengers on 19 September. The new station building was officially opened on 3 December 2007.

Turn right towards The Hippodrome

In the early Edwardian era a fine theatre was opened on 1st June 1903. It had been designed by local architect J A Baron and was on the site of an earlier theatre known as the Peoples Palace. It was operated as the New Hippodrome Cinema from 8th August 1938 when it reopened with Anna Neagle in Victoria the Great. On 1st September 1963 it was converted to a Surewin Bingo Club by Hutchinson Cinemas which continued to operate in 2008. By May 2019 it was independently operated as the Hippodrome Bingo Club.

Onwards down Corporation Street to Century House, currently awaiting some care and attention and tenants.

Century House is a prominent landmark in St Helens town centre, being the tallest office building in place. The accommodation ranges over 9 floors, providing offices from a single person, to whole floors. In addition, all tenants benefit from the use of a modern break out space and meeting rooms, in addition to manned reception desk.

Next to the Courthouse low lying, lean and landscaped.

Further on down the road the former Unitarian Chapel – now the Lucem House Community Cinema.

On the corner the YMCA offers a cornucopia of architectural styles and fun.

Including this geometric brick panel.

Around the corner to the Police Station by Lancashire County Architect Roger Booth.

Down the way the derelict Job Centre.

There are plans afoot for conversion to apartments.

The Capitol Cinema opened on 3rd October 1929 by an independent operator. It stood on a prominent corner site at North Road and Duke Street – known as Capitol Corner.

The Capitol Cinema was taken over by Liverpool-based Regent Enterprises Ltd. in 1929, and by the Associated British Cinemas – ABC chain in 1935. It underwent a renovation in the 1960’s, and was closed by ABC on 9th December 1978.

The building was converted into a sports centre, by 2009 it was a Central Fitness gymnasium.

Along the way to St Mary Lowe House RC – the style is a combination of Gothic and Byzantine elements. One of the most unusual fittings is the carillon, one of the largest in the British Isles with 47 bells, which was installed in 1930 and is still played regularly.

Next to the Ormskirk Street United Reformed Church

The main approach is identified by a beak-like porch which projects from the main cladding.  In this space hangs a recast eighteenth century bell, from the original chapel.

Let’s take it to the Midland, Nat West and Barclays Banks.

With an intermediate former Gas Showroom.

Next to the Church of St Helen.

A chapel has been on the site since at least the 16th century. The chapel was doubled in size in 1816, but burnt down in 1916. It is the parish church of the town, and stands in a prominent position.

Next crossing a complex web of inner ring roads designed with the beleaguered pedestrian at the forefront of the planners’ minds. 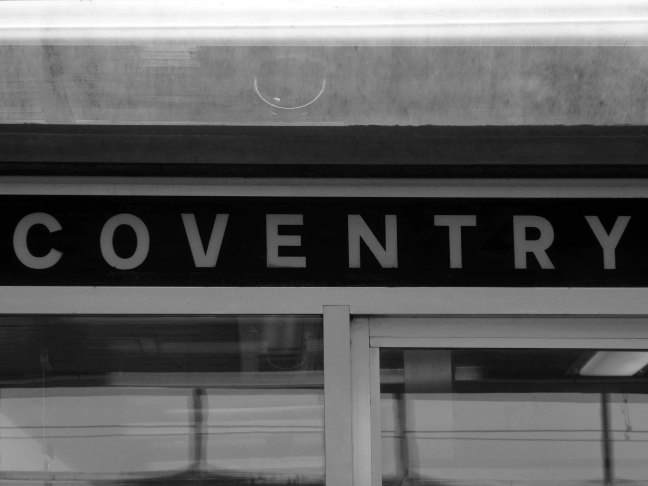 Here we are again, we have been here before – one of the nation’s finest post war railway stations.

Gateway to the City of Culture.

Though I freely admit that my heart belonged to Stoke’s failed bid.

So much so I bought a shirt.

The station is the work of architects WR Headley and Derrick Shorten who worked with John Collins, Mike Edwards and Keith Rawson.

Outstanding architecturally, particularly for its spatial qualities and detailing.

So here is my exploration of its spatial qualities and detailing.

East Didsbury Station was opened in 1909 by the London and North Western Railway and, until 6 May 1974, was called  East Didsbury and Parrs Wood.

The station was rebuilt in the 1959 by the architect to the London Midland section of British Rail, William Robert Headley – who was also responsible for Coventry, Oxford Road and Piccadilly Stations.

With the privatisation of rail services in 1996/7, East Didsbury was served by the North Western Trains franchise.

Although it’s just up the road from me, this is the first time I’ve ever travelled back to or from there.

I was off to Eccles – live and direct!

The southbound side has been tastefully replaced by nothing in particular.

In a style to match our austere privatised times – provincial bus stop chic.

The last of the few, get it while you can – all aboard for Patricroft, right away guard!

Some time ago in Stockport Fred Perry was born, lived and moved away – in pretty rapid succession. Nevertheless the Borough claims him as their own and to celebrate the fact, they have devised a Way.

Not the way or an away day but a named way, the Fred Perry Way.

Stretching from North Reddish in the north to Woodford in the south – zigging and zagging through and across highways and byways, avenues and alleyways.

For the long distance walker it may be useful as a link route. The Fred Perry Way provides a link between the Bollin Valley Way, and through that, the North Cheshire Way, and via a short link between Mottram & Woodford, the Tame Valley Way and Etherow Goyt Valley Way at Stockport. A full crossing of historical North Cheshire could be devised, linking Black Hill & Crowden on the Pennine Way with Hilbre Island, utilising also the Wirral Way/Wirral Shore Way.

Anyway this is what I saw way back when, but I’ll be back again in a bit!

This is a bridge – an iron bridge, so called, carrying weary walkers from Kings Road to Chester Road and beyond.

Possibly to Stretford Station and even further beyond beyond.

The bridge traverses the former Manchester South Junction and Altrincham Railway, the southern part of the MSJ&AR’s route has been part of the Manchester Metrolink light rail system since 1992.

This may seem sufficient to satiate the local historian’s voracious appetite for facts and general tittle tattle, but wait.

More than once this charming lad would have walked the bridge himself – on the way to goodnesses knows where.

In later life he changed his name to The Smiths and wrote a chart topping tune Still Ill name checking the Iron Bridge.

Under the iron bridge we kissed
And although I ended up with sore lips
It just wasn’t like the old days anymore
No, it wasn’t like those days, am I still ill?

The location is now a place of pilgrimage for Morrissey’s deluded fans, who with depressing regularity, adorn the structure with their misquoted quotes.

Sun drenched faux-Californian Mr Morrissey does seem to be still ill in his own unique and unpleasant manner.

Let’s take a look at what he’s been missing.

What indifference does it make?

So here we are again at Piccadilly Station – stood standing at the western end of Platforms 13 and 14, waiting on a Southport train.

Time to spare and spend a few more magic moments with an old and trusted friend.

Seen here in a neglected and forlorn state, awaiting minor repairs to its upper sealed surface.

Once incarcerated and seemingly set for demolition, our diminutive concrete pal has lived to fight another day.

Standing alone in all elements, disabused by illicit smokers, grabbing a serruptitious chuff, whilst avoiding the ubiquitous Network Rail CCTV.

Sat upon by the indolent leg weary traveller, having missed yet another cancelled train.

I for one shall campaign for your preservation and reinstatement – right at the heart of matters.

Somethings are worth fighting for!

Where the Victorians modelled their stations on cathedrals, temples and palaces.

Modern Man models his on shopping centre and office blocks.

Richards and MacKenzie – The Railway Station

Though it seems to me that Macclesfield Station, in its earlier and current states, refuses to dovetail neatly into either of these sloppy binary paradigms.

The former – single storey buildings, fitting unostentatiously into the topographic and practical constraints of the site. A neat, tightly packed rhythm of brick arches with a compact and bijou porch welcoming the expectant traveller.

From the golden age of steam to the moribund years of diesel, Macclesfield sits comfortably somewhere, betwixt and between ugly duckling and fully fledged swan.

Nestled in the lea of the East Cheshire Highlands, offering practical everyday transport solutions to the beleaguered commuter.

No frills, no thrills.

The London and North Western Railway opened the line between Manchester and Macclesfield on 19 June 1849 – Macclesfield Central was born. Later it would become a key station on the Stafford branch of the West Coast Main Line, remodelled in 1960 and rebranded as the much snappier Macclesfield Station.

Which it proudly announces topically and typographically to the world. 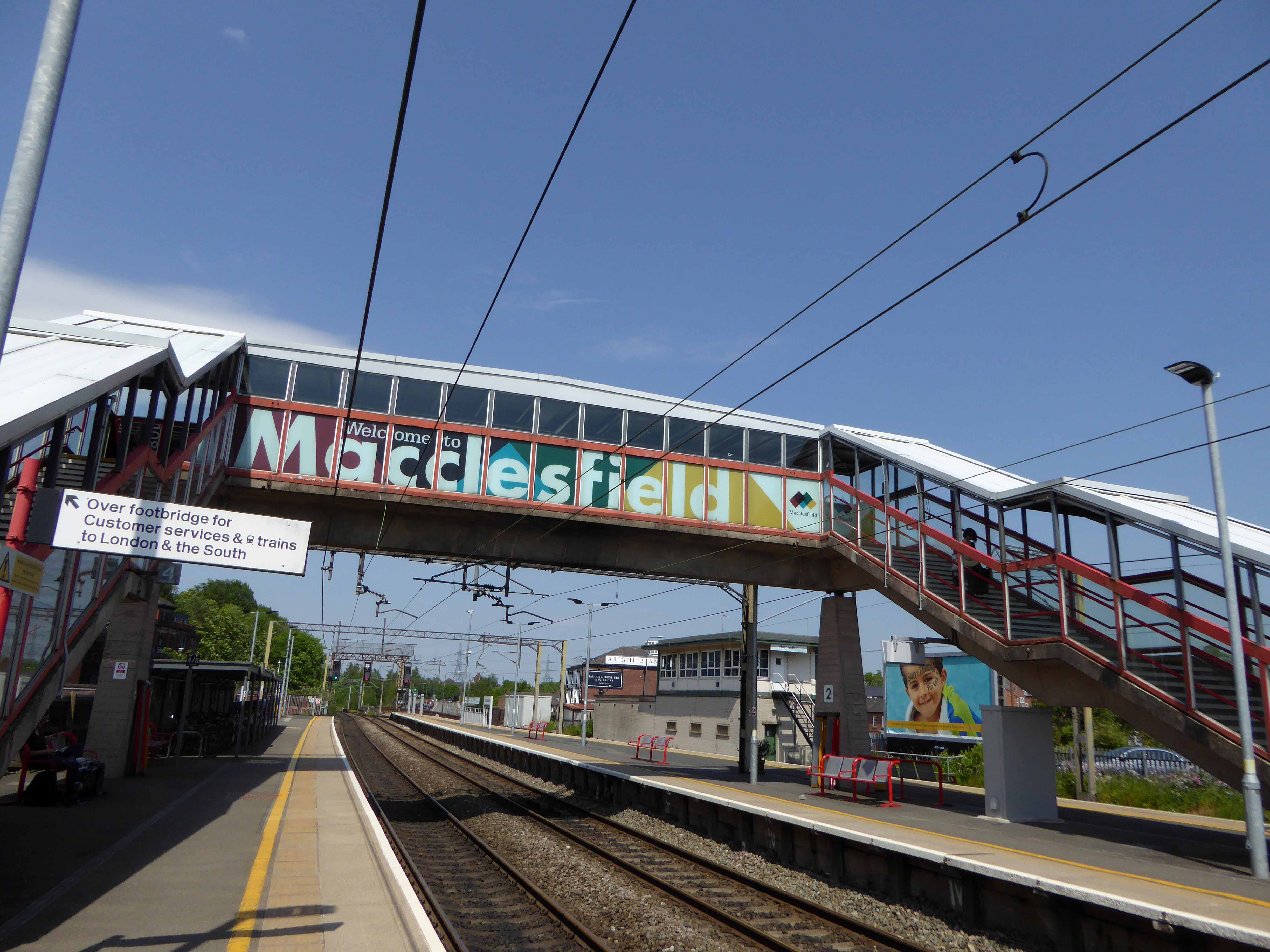 Welcome to Macclesfield a town that is clearly going places, and so are you.

The station won the Best Kept Station in Cheshire Award for 2007, but was reported in summer 2011 to be distinctly shabby, with peeling paintwork.

And yet there is something in the constituent Platonic steel, glass and concrete forms that never ceases to amuse and amaze me, this is Brutalism on a human and provincial scale.

The raw concrete softened with three or four shades of grey, as a concession to the delicate suburban sensibilities of this once silk-fuelled town.

Take a trip with me – join the Cheshire train set. 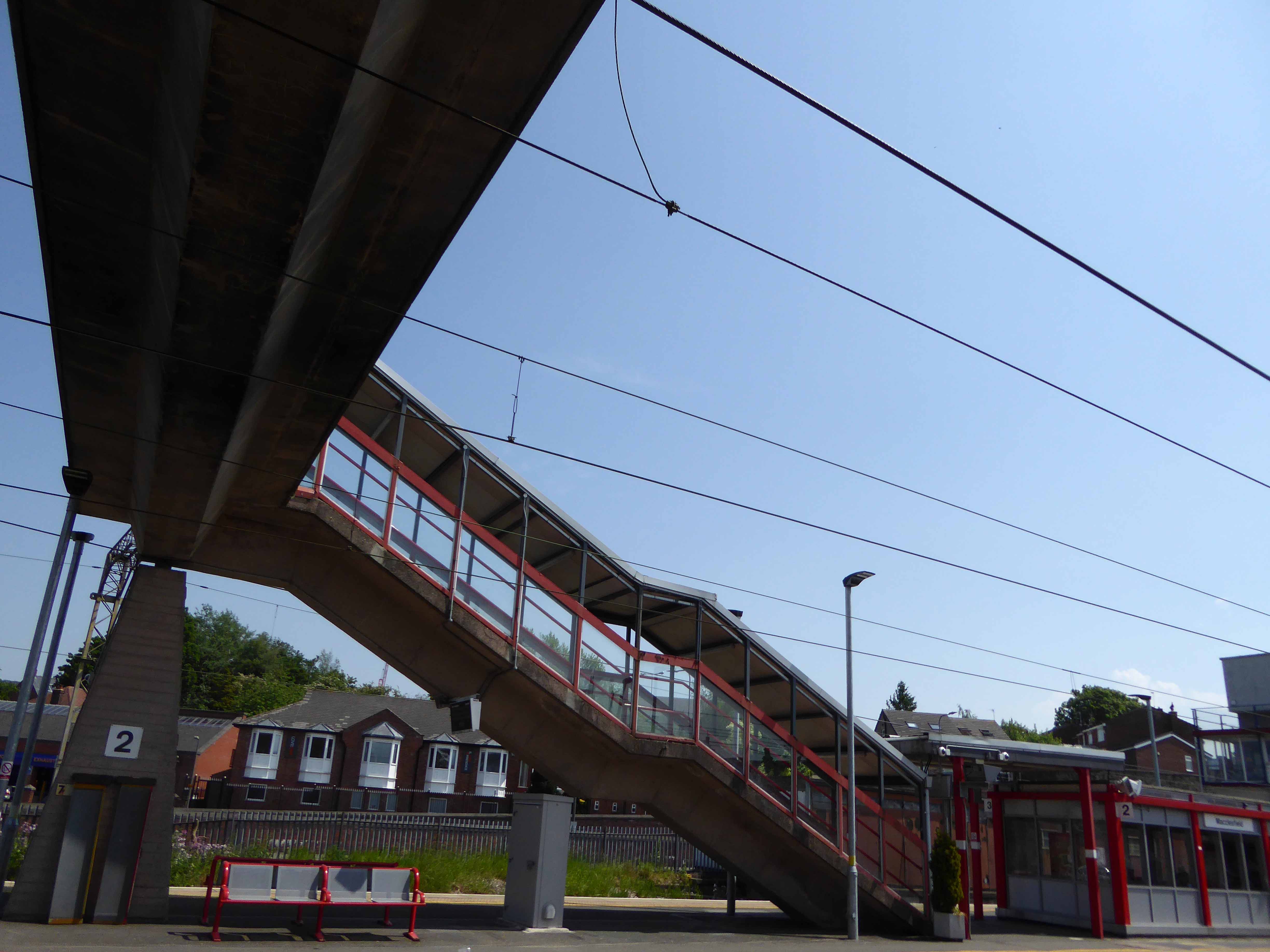 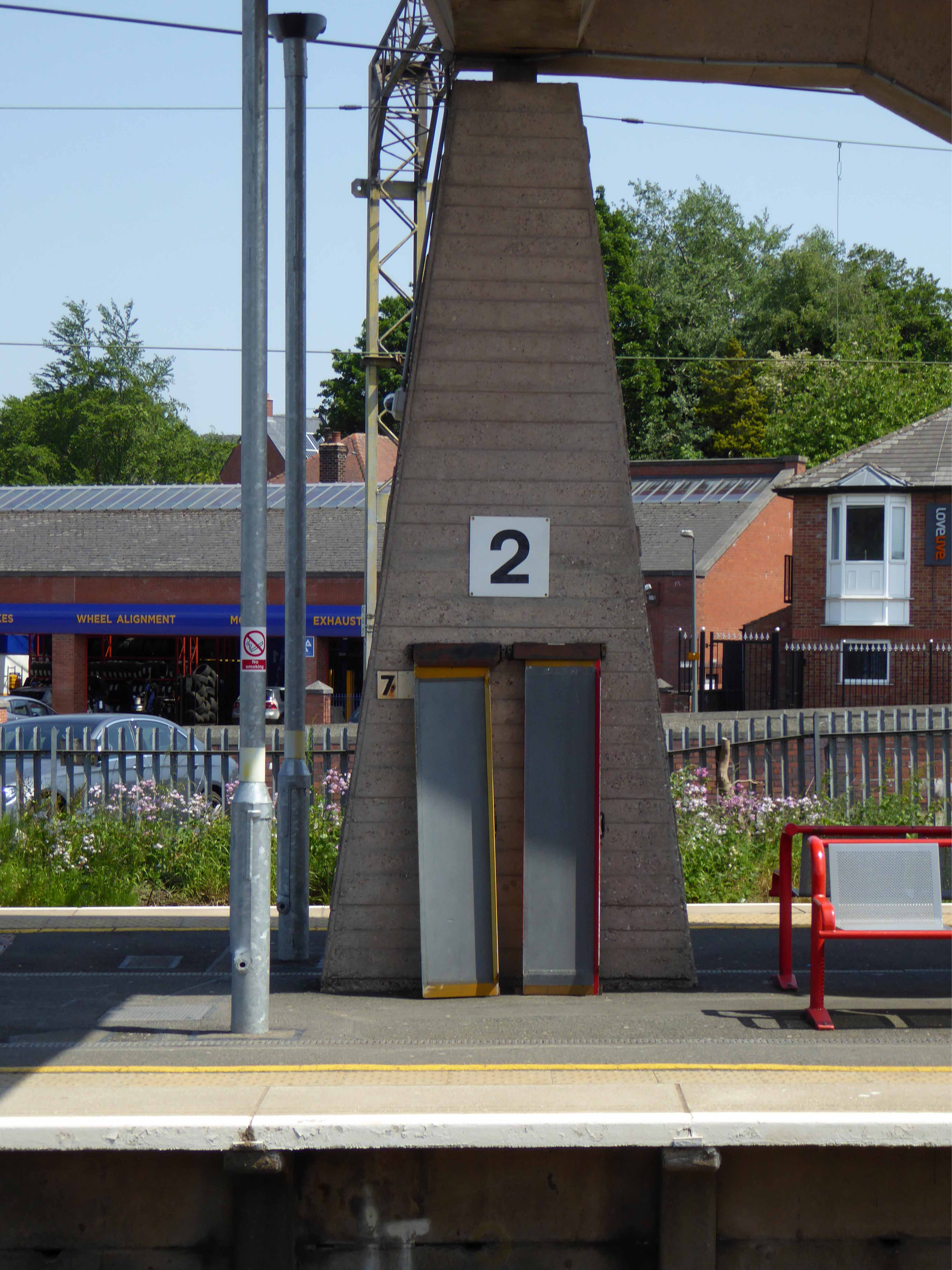 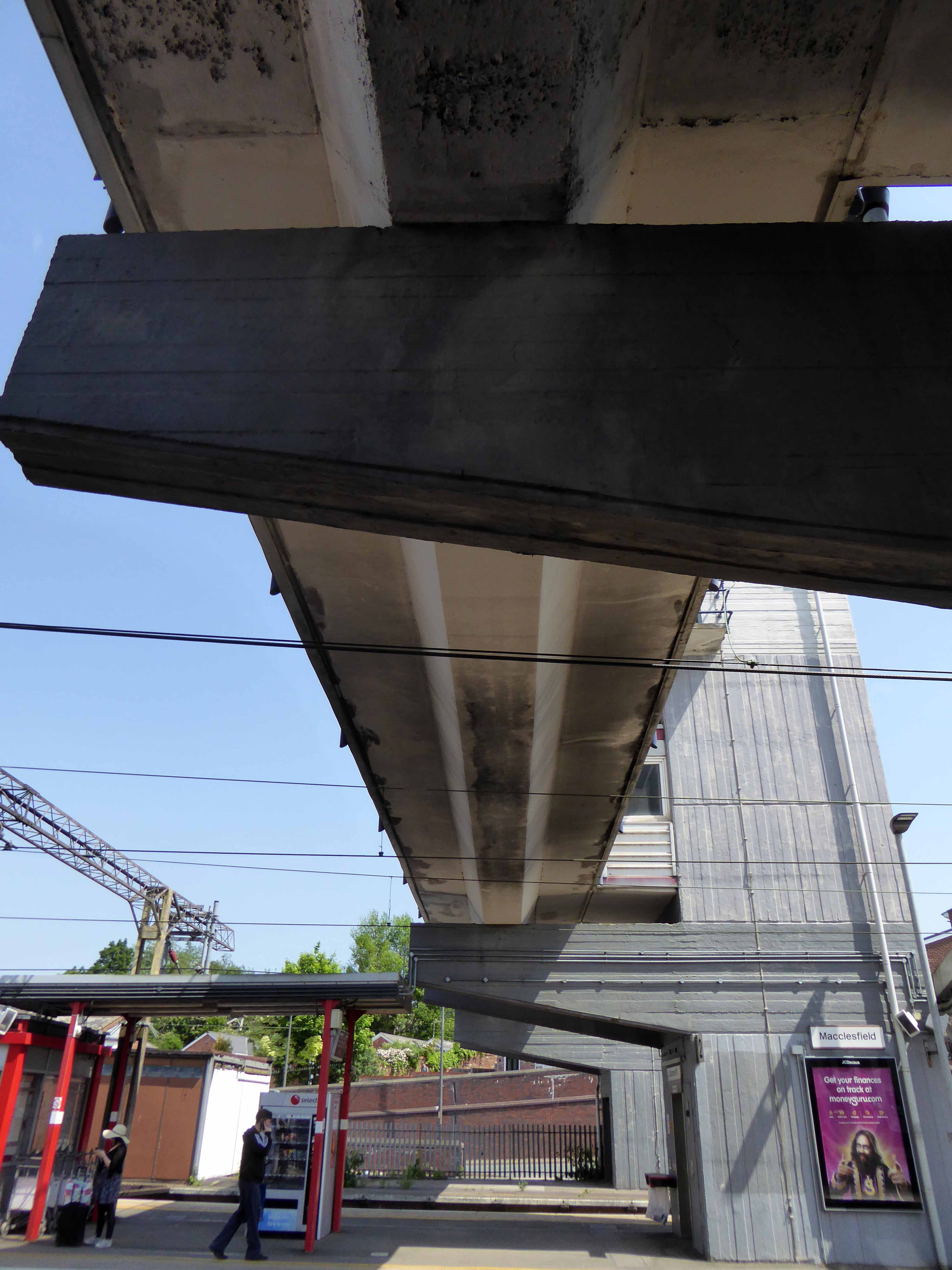 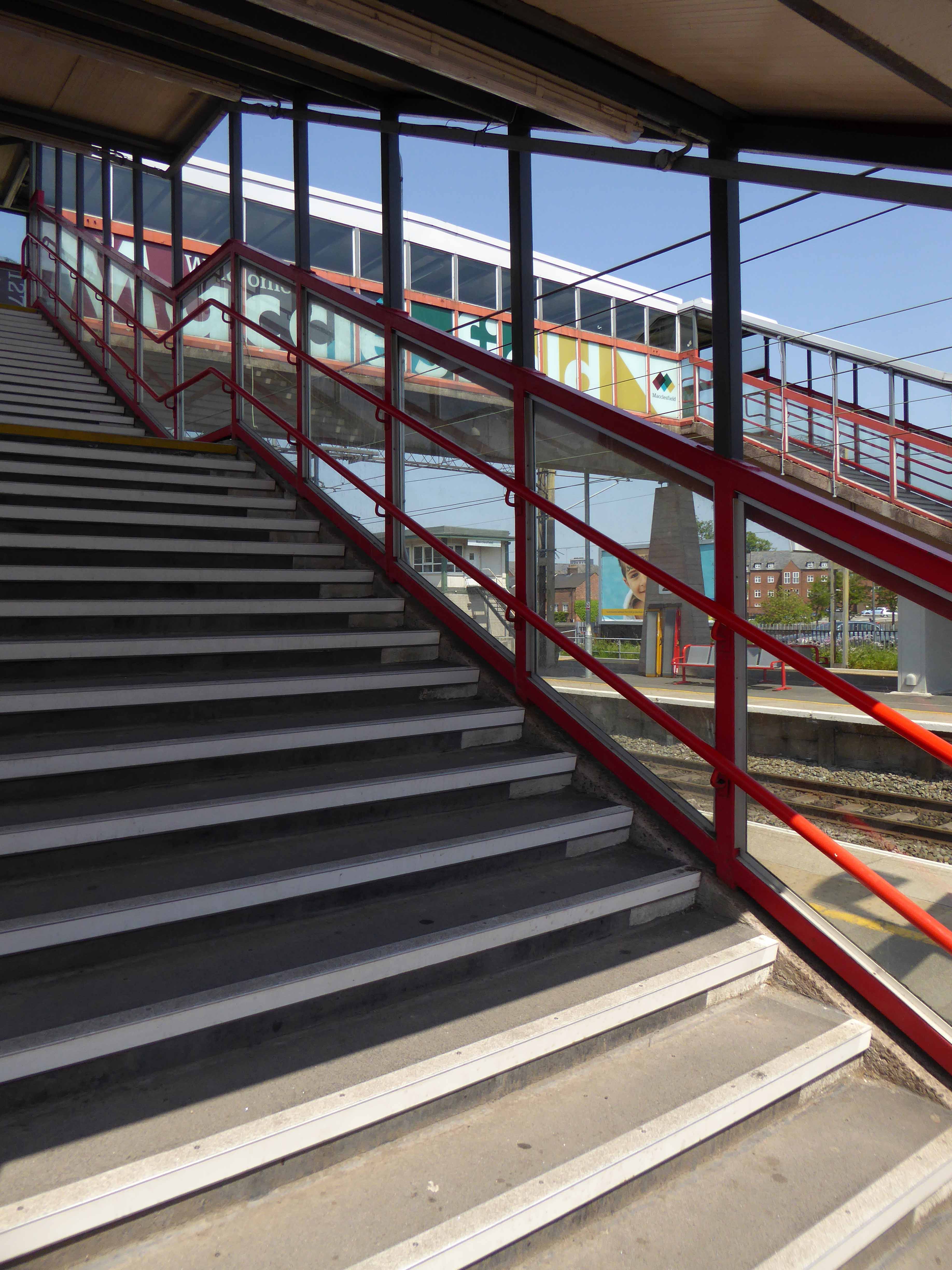